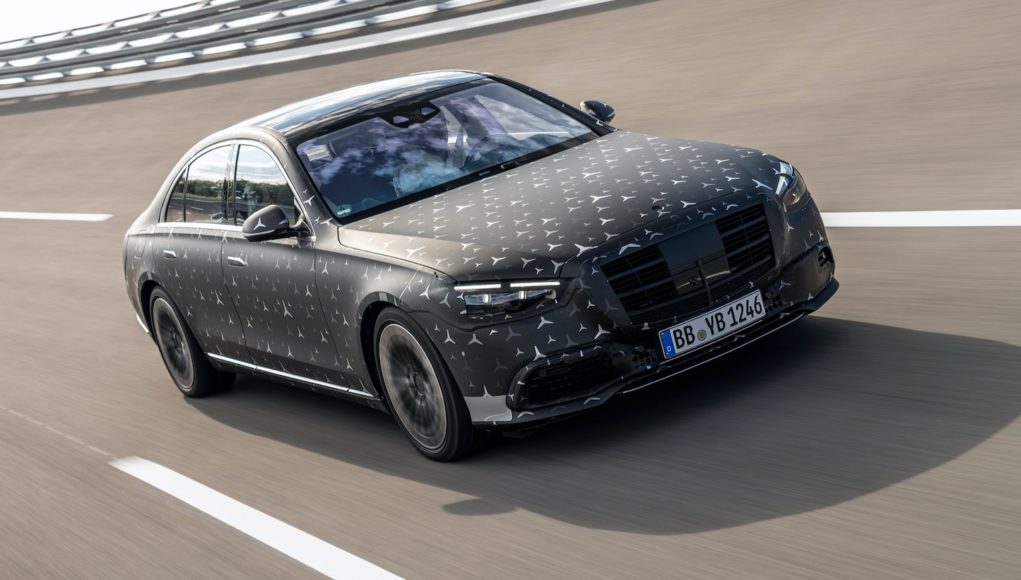 The 2021 Mercedes-Benz S-Class is getting a lot of new tech features. We already know about its updated MBUX infotainment system, but today Mercedes-Benz has released a few more details, like about its rear-seat airbags and rear-axle steering system.

The 2021 S-Class has a new rear-seat airbag system that’s part of the Executive Rear Seat Package. The airbags deploy out of the backs of the front seats. In a frontal impact compressed gas inflates a wing-shaped structure and a large, tent-like airbag deploys between the two wings. Mercedes-Benz says that the airbags deploy “especially gently” and are designed to “greatly reduce the loads acting on the heads and necks of the outer rear passengers.”

The rear-seat airbags work with the inflatable seatbelt and the 2021 S-Class is available with “illuminated designer belt buckles,” which make them easier to find in the dark.

To make the 2021 S-Class easier to maneuver, it’s available with a new rear-axle steering system, which can turn the rear wheels in the same or opposite direction as the front wheels. The system switches from counter-direction to same-direction steering at more than 35 mph.

“The rear-axle steering makes the S-Class as maneuverable as a compact car. Even for the S-Class with a long wheelbase, the turning radius is reduced to under 36 feet.”

The 2021 S-Class 48-volt chassis allows for other tech features like the Road Surface Scan system, which uses the stereo multi-purpose camera to read the road ahead and automatically adjust the suspension. The 48-volt system also powers the Pre-Safe Plus Impulse Side system, which raises the S-Class up to three inches if it detects an impending side collision, to reduce the load on the door structures.

Mercedes-Benz teaches the ABC’s of Off-Roading

Mercedes-Benz to kill several car models in the US