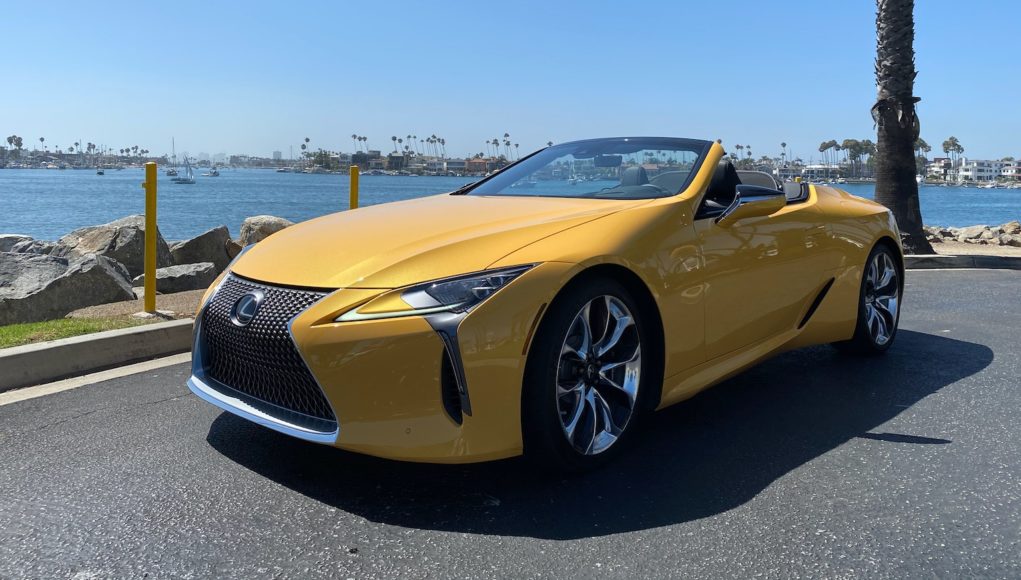 It’s not very often that we get to spend time behind the wheel of a car with a glorious soundtrack, especially in the electrified age. The Lexus LC 500’s 4.0-liter V8 has one of the best soundtracks in the big luxury coupe segment and now you get to enjoy it even more with the arrival of the 2021 Lexus LC 500 Convertible.

Ever since the LC arrived back in 2016, Lexus’ large coupe has probably been described as “stunning” way too many times. Now Lexus has made it even better with the convertible version that takes everything we love about the LC, but drops the top so we can get a bit more sun and enjoy the sounds of that engine even more. The top can also be dropped in about 15 seconds at speeds up to 31 mph.

If you already love the look of the LC Coupe, you don’t have to worry that its chopped off roof will ruin its timeless styling. If anything the lack of the roof, lets you focus even more on the sculpted body. It’s crazy that even after four years, the LC still looks like a concept car – especially from the rear.

Inside there are still four seats, just like in the coupe. The front seats coddle you in luxury, but are also sporty enough to keep your butt from sliding around when you’re having some fun on that back country road. Good luck trying to fit anyone in those rear seats, since the front seats eat up most of the available legroom. Also with only 3.4 cubic feet of cargo space, you better pack lightly for that weekend getaway.

The LC is packed with tech features too, like an 8-inch digital screen in the gauge cluster, a 10.3-inch screen for the infotainment system, a head-up display and a Mark Levinson 915-watt audio system.

The only thing we wish were on the list is a wireless charger for your cell phone. While we’re talking about gripes, there aren’t really any big ones, but we do hate the infotainment system with its trackpad controller.

It’s also a bit clunky to have to access the climate control settings via the same screen, since there aren’t any physical buttons for the seats, heated steering wheel or neck heaters. The climate control system does have a “Climate Concierge” function that’s supposed to automatically turn on the heating and ventilated seats and neck-level heaters based on the settings of the HVAC system, but we found that often times the system either didn’t automatically turn them on or it was the opposite setting that we’d like.

Under the hood the LC 500 Convertible is powered by the same 5.0-liter naturally aspirated V8 as the coupe. It generates 471 horsepower and 398 pound-feet of torque and is mated to a 10-speed automatic transmission that sends all that power to the rear wheels. The LC 500 Convertible can reach 0-60 mph in 4.6 seconds, which is just a tad slower than the coupe at 4.4 seconds. It has a top track speed of 168 mph.

How does it drive? On the road the LC 500 Convertible drives like it owns the road. That big V8 sounds like perfection, so much so that you easily forget about what songs are belting out of the audio system. The V8 lets out a deep growl from a stop and from there the sound only gets more pleasing to the ears. The LC 500 sounds just as good as the Jaguar F-Type, but without the pops.

The ride isn’t harsh, since at the end of the day the LC 500 Convertible is a grand tourer. The LC 500 isn’t meant to set records on the track, instead it is a stylish, drop top that’s best for a Sunday drive down the coast. You may find a few fun curves to get your heart rate pumping, but then you can settle back in for the ride. If you want something sportier you’ll want to go with the Porsche 911 or Jaguar F-Type, but for the buyer that wants the best of both worlds, it’s hard to ignore everything that the LC 500 Convertible brings to the table.