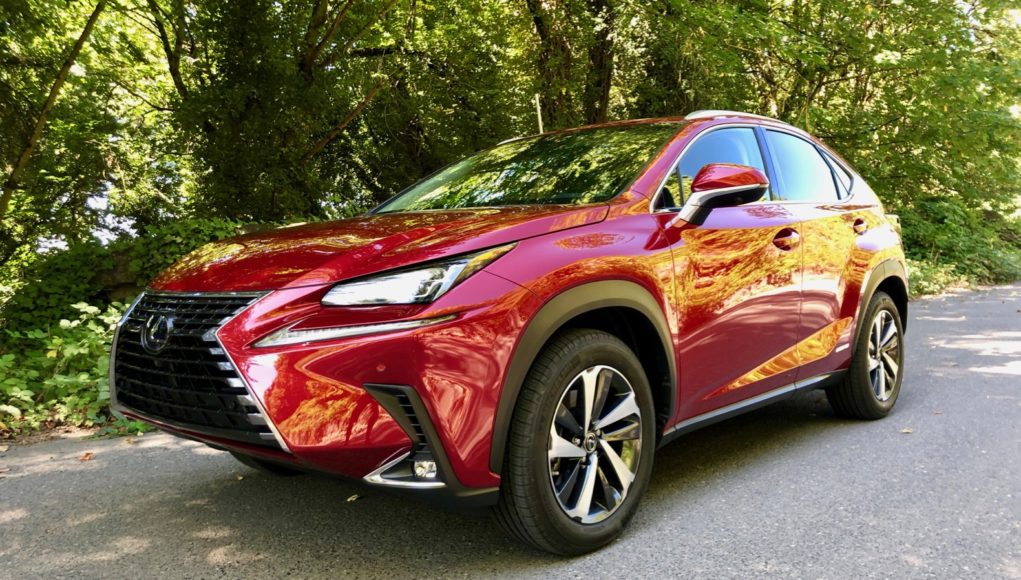 The 2020 Lexus NX is a compact luxury crossover SUV that presents a bold alternative to its understated German and American rivals. Following a visual refresh in 2018, the 2020 NX carries over with few changes and newly standard Apple CarPlay compatibility.

While the NX was first considered brash for its angular looks when it launched as a 2015 model, other competitors have caught up, and we’re used to the bold looks by now. The F Sport model adds both visual and handling intrigue to the sheet metal, but inside, the NX is reserved and business-like with high-quality materials and a variety of upholstery colors. For those looking for more frugality at the pump, the NX 300h hybrid mates an electric drive system with a 2.5-liter inline-4 for a total of 194 hp which is what we spend our week of testing with.

The 2020 Lexus NX is extroverted outside, comfortable inside, and more familiar by the year. When the Lexus NX debuted in 2015, it was a radical departure from the Japanese brand’s norm. Four years on, we’ve become accustomed to its angry face, and the cabin remains a reserved palate-cleanser for those put off by the exterior. The NX received a slight visual refresh in 2018, yielding new headlights and taillights and a slight revision to its “spindle” grille, though most won’t notice the subtle changes. The F Sport trim turns the styling up a notch, with an even larger grille, bigger wheels, a lower body kit, and more visual flourish, especially in a bright blue or red paint colors.

The 2020 Lexus NX is outpaced by its competitors, but buyers still have a choice of both in turbo-4 and hybrid propulsion form, the latter still  unmatched in fuel economy. The NX 300 (nee NX 200t) is powered by a 2.0-liter turbocharged inline-4 that makes 235 horsepower, and comes standard with a 6-speed automatic transmission and either front- or all-wheel drive. The hybrid NX 300h uses a 2.5-liter 4-cylinder with a battery electric system to manage 194 hp total, and comes standard with all-wheel drive thanks to electric motors powering the rear wheels. The NX 300h uses a continuously variable automatic transmission (CVT). Overall, the NX 300h is smoother and offers more linear, predictable acceleration.

Opting for the F Sport package on the NX 300 adds all-wheel drive and some visual goodies, but does not increase engine output. However, the suspension is tweaked slightly and more aggressive 18-inch wheels and tires make the F Sport more enjoyable to drive on a curvy road than the standard NX. Also, F Sport models get a special “Sport+” mode that increases throttle response and keeps engine revs higher for longer, and pipes some augmented engine noise into the cabin. Our biggest gripe, is that the F Sport Package isn’t available on the best version of the NX, the 300h.

In general, the NX is geared for comfort and quiet, with a light steering effort and not much body roll for a crossover SUV. The CVT and electric motors on the hybrid NX provide smooth effortless power while still providing class leading fuel economy. Below 30 mph, the 2020 NX hybrid can even be switched into an electric drive mode that keeps the gas engine shut off until it’s used up its hybrid battery charge.

The 2020 Lexus NX offers class leading fuel economy in hybrid form, but the turbocharged version is average otherwise.The base, front-wheel drive NX 300 is rated by the EPA at 22 mpg city, 28 highway, 25 combined, while the all-wheel drive version drops the combined figure by 1 to 24 mpg. Because of its bigger wheels, the F Sport version of the NX 300 also loses 1 mpg on the highway figure, totaling 22/27/24 mpg. Naturally, the NX 300h hybrid is the fuel miser of the bunch, managing 33/30/31 mpg, which is currently the class leader.

Cargo space is also adversely affected by the short wheelbase, with only 54.6 cubic feet with the seats folded down, among the lowest in its competitive set. With the seats in place, that number shrinks to 17.7 cubic feet, and the sloping roofline makes taller, boxier items more difficult to haul.

The 2020 Lexus NX is a safety superstar, both in terms of crash test results and standard active safety features. While the 2020 model hasn’t been rated yet, last year’s Lexus NX achieved high scores all around from the IIHS and a Top Safety Pick+ award. The 2019 Lexus NX also managed a five-star overall rating from the federal government, though frontal and rollover crash tests only yielded a four-star result. As far as the IIHS scores go, the NX received a “Good” score in every test including headlights, as well as “Superior” for its standard front crash prevention technology. A full suite of active safety tech is standard on all NX models, including automatic emergency braking, lane-departure warnings, adaptive cruise control, and automatic high-beam headlights.

Inside, the interior stays the same, which is fine by us as this is one of the best-executed cabins in its segment. The dashboard design is reserved compared to its avant-garde exterior, and puts all the necessary controls front-and-center, though the infotainment screen is still controlled through a finicky touchpad on the center console. A palette of muted silvers, grays, black and wood trim are pleasing to the eye, and the F Sport package adds the option for an intriguing dark red and black upholstery.

The 2020 Lexus NX is comfortable and quiet inside, though front seat passengers get a better experience than those in the rear. The NX delivers on what Lexus does best: building comfortable and quiet interiors with high-quality materials.  Though its length is within an inch or two of most competitors, the NX has a relatively short wheelbase, which has a negative effect on interior space. Front seat passengers are treated to comfortable, multi-power-adjustable seats with supportive cushions and a slightly lower seating position than competitors, yielding plenty of head room. The F Sport model comes with even better thrones that are superior, and have side bolstering for spirited driving. In the rear, the NX’s short wheelbase comes calling, as the seat cushions are flatter than they should be and leg room could be better.

For a base price of around $36,000, the 2020 Lexus NX comes very well-equipped as standard, and can be had with many optional luxury features. The Lexus NX comes standard with many features you should expect from a luxury crossover SUV, including 17-inch alloy wheels, dual-zone climate control, power-adjustable front seats, an 8.0-inch screen, automatic headlights, and Bluetooth connectivity.

For 2020, options remain the same, including the Comfort package which adds heated and ventilated seats, and a blind-spot monitoring system. The Luxury package includes leather upholstery, a power-operated tailgate, wood trim, and the self-dimming mirrors and blind spot monitoring system that the Comfort package also includes. Opting for navigation nets buyers a 10.3-inch infotainment screen that unfortunately doesn’t upgrade the frustrating user interface. Thankfully, Apple CarPlay compatibility and Amazon Alexa integration were added to the NX in late 2018. With all-wheel drive, leather, and a few options, the NX 300’s price climbs to about $46,000, but that’s not out of line with its rivals.

While the 2020 Lexus NX has been on the market for a few years, it’s still a great entry in the small luxury SUV class. With stand-out styling, Lexus refinement, and formidable standard features; the Lexus NX is definitely worth a look. So if fuel economy and renowned reliability are at the tops of your shopping criteria, then the 2020 Lexus NX is a must see.