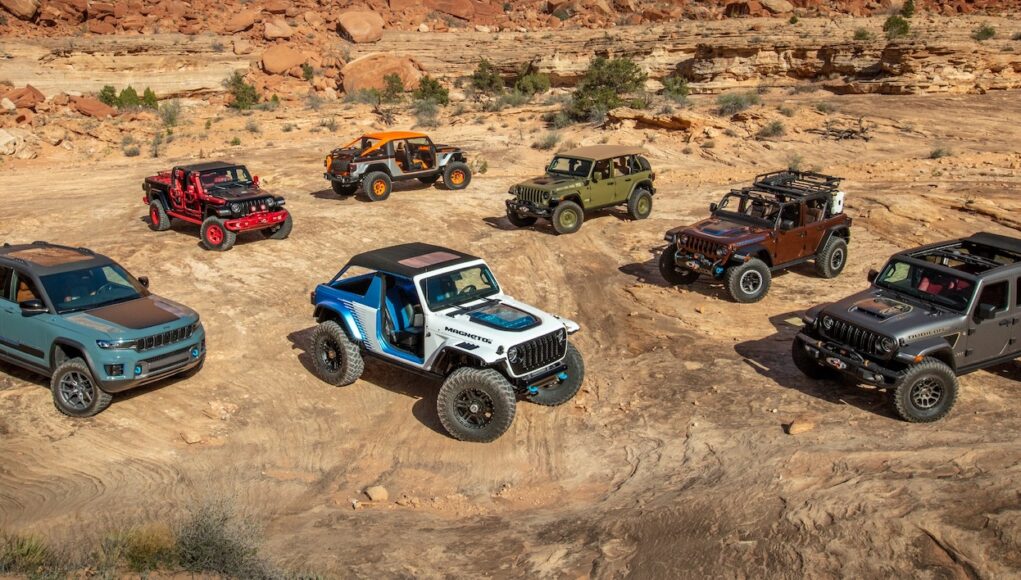 Jeep is ready for the 2022 Easter Jeep Safari with a bunch of concepts, some new and some we’ve seen before, to the event. The concepts are based on the Wrangler, Gladiator and Grand Cherokee.

Starting with the Magneto 2.0, which is an update of the all-electric Magneto concept that debuted last year. This time the concept has been upgraded with more power, 625 horsepower and 850 pound-feet of torque. The electric powertrain is still mated to a manual transmission, that has been borrowed from the Hellcat. The Magneto 2.0 features a Dynatrac 60 Pro-Rock axle at the front and a Dynatrac 80 at the rear with a 5.38 ratio.

The ’41 concept is another concept that is electrified, since it’s based on the Wrangler 4xe plug-in hybrid. It’s painted in an olive D.R.A.B. ‘41 matte green finish, with black powder-coated steel bumpers, Warn winch and JPP bumper hoop. It also gets a tan soft-top, JPP half doors, a JPP 2-inch lift kit and 35-inch mud-terrain tires with 17-inch Fifteen52 wheels painted in D.R.A.B. ‘41 matte green.

The Rubicon 20th Anniversary concept celebrates the arrival of the first Wrangler Rubicon in 2003. It’s based on the Wrangler Rubicon 392 with its 6.4-liter V8. Some of the upgrades include an active dual-mode performance exhaust, a performance hood with center scoop, custom-built half doors and Sky One-touch powertop with removable side panels. It’s covered in a matte Granite Crystal exterior vinyl wrap with a Rubicon 20th anniversary hood decal and American flag fender decal.

The Jeep Bob concept gets its name from the trend of “bobbing” the long overhangs of pickup truck beds for better off-road departure angles. The Bob started as a Gladiator, but the bed has been “bobbed” a full foot of length. It also gets custom steel front and rear bumpers to improve its approach and departure angles. Other upgrades include a 3-inch lift kit, Dynatrac Pro-Rock 60 axles, a mix of King Coils and Bypass shocks, and huge 40-inch tires are mounted to 20-inch beadlock wheels. The Bob concept is powered by the turbocharged 3.0-liter EcoDiesel V6 engine.