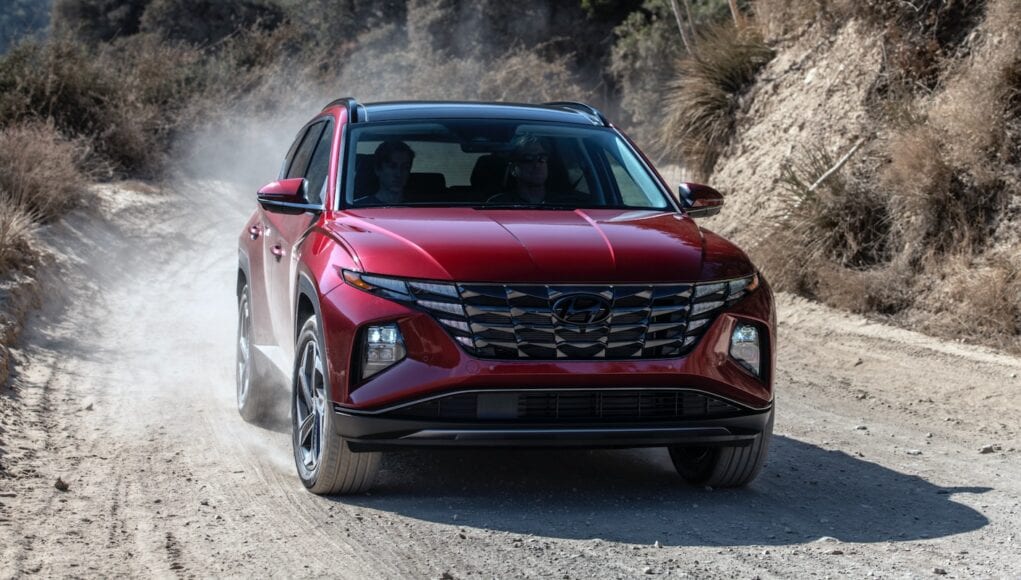 A few months ago Hyundai unveiled the 2022 Tucson and now we have all the details about the U.S. spec version, which will go on sale next spring.

The 2022 Tucson still sits in between the Kona and Santa Fe in Hyundai’s crossover lineup. It’s now much larger though at 6.1-inches longer than before and its wheelbase has been stretched 3.4-inches to 108.3-inches. It’s also wider and taller than before. Without the optional panoramic sunroof, the passenger space has increased by 6.0 cubic feet and the cargo space with the rear seats up is up to 39 cubic feet.

This all means that on the outside the new Tucson is closer to the same size as the Honda CR-V and Toyota RAV4. Hyundai says that the 2022 Tucson will have 3.5-inches more rear legroom than the RAV4 and about an inch more than the CR-V.

On the outside you’ll immediately notice how much more aggressive the Tucson looks now with its hard edges, sculpted fenders and its large grille.

Inside the traditional shifter has been replaced by a pushbutton setup and there’s an available 10.3-inch infotainment screen. We also can’t leave out the digital gauge cluster.

Under the hood the Tucson will come standard with the same 2.5-liter four-cylinder engine as the base Sonata. The engine generates 187 horsepower and 178 pound-feet of torque, which is an increase of 23 horsepower over the old 2.0-liter engine. The 2.5-liter is mated to an updated eight-speed automatic transmission. With front-wheel drive, Hyundai expects the Tucson to have a 28 mpg combined rating.

The greener options are the new hybrid and plug-in hybrid versions. Both feature a turbocharged 1.6-liter four-cylinder that’s mated to a six-speed automatic transmission and all-wheel drive. The Tucson hybrid gets a 59-hp electric motor and a 1.49-kWh battery pack to generate a combined 226 horsepower and 258 lb-ft. of torque. The hybrid powertrain is 30 percent more fuel efficient than the standard engine.

The Tucson plug-in hybrid will arrive next summer with a larger 13.8-kWh battery pack and an all-electric range of 28 miles.

A sportier Tucson N Line is also in the works and will arrive late next year.

2021 Hyundai Santa Fe arrives with a new face and powertrains