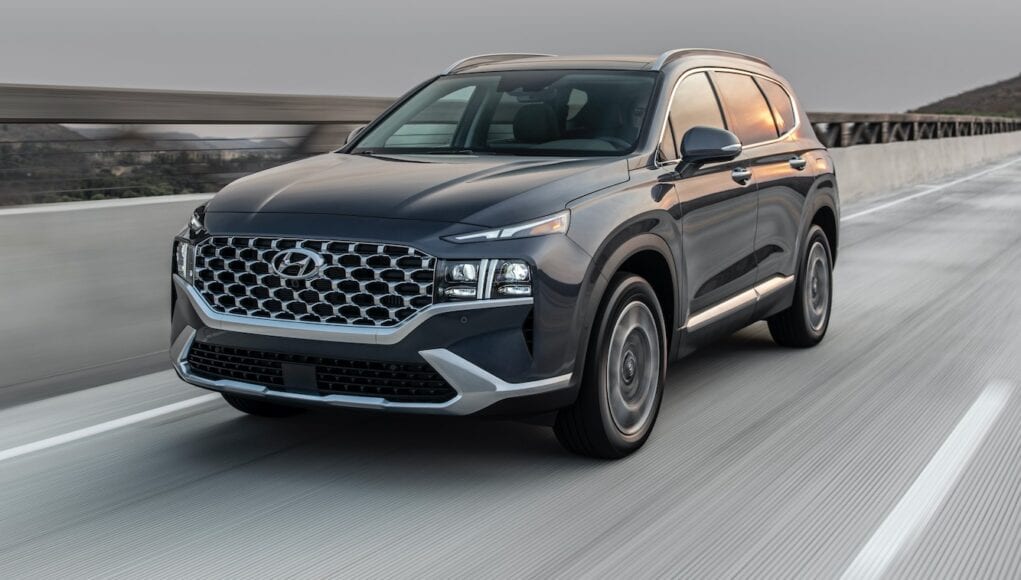 Hyundai showed off the updated 2021 Santa Fe a few months ago, but now Hyundai has announced all the details about it. You’ll immediately notice the Santa Fe’s new face, but there’ also some big changes under the hood as well.

The 2021 Santa Fe’s base 2.4-liter four-cylinder engine has been replaced by a 2.5-liter engine with slightly more power at 191 horsepower and 182 pound-feet of torque. The EPA hasn’t announced the results of its testing for the new Santa Fe, but Hyundai estimates that the new engine will have a 26 mpg combined rating.

There’s also a new green option with the arrival of the Santa Fe Hybrid, which features a 1.6-liter turbocharged engine, a 17-horsepower starter-generator motor and a 59-horsepower drive motor. The hybrid powertrain is mated to a six-speed automatic transmission and a standard all-wheel drive system. The hybrid powertrain generates an estimated combined 225 hp and 195 lb-ft. Hyundai hasn’t announced the fuel economy specs for the hybrid.

If you want something even greener, a Santa Fe Plug-in hybrid is coming later next year.

Other upgrades include a new braking system, a lower coefficient of drag from 0.34 to 0.33 Cd and the use of more high-tensile steel, which has reduced the Santa Fe’s weight.

On the safety front, the 2021 Santa Fe comes standard with Forward Collision-Avoidance Assist (FCA) with pedestrian, cyclist and junction-turning detection.