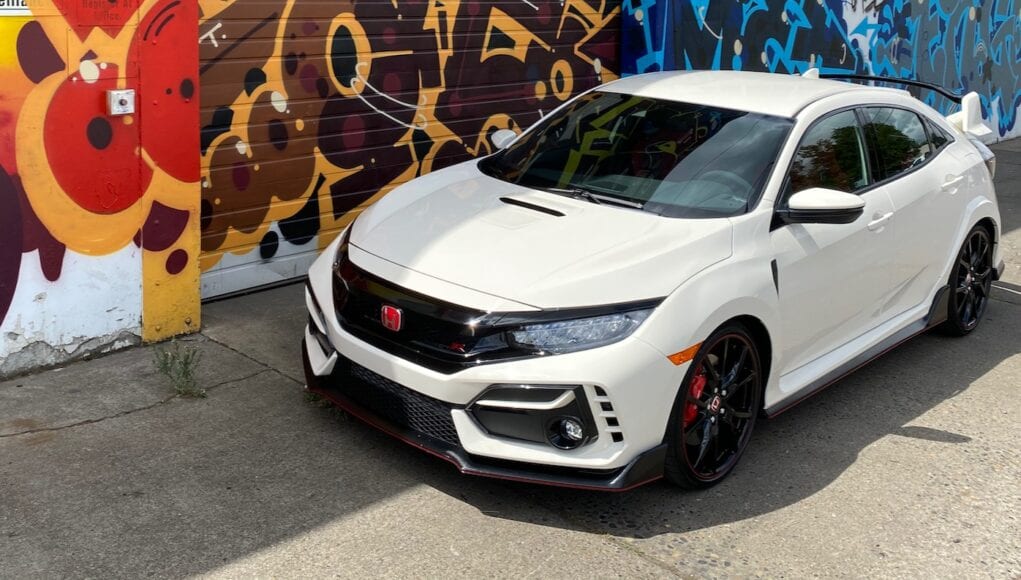 The 2020 Honda Civic sets the pace among affordable compact cars especially with the wild Type R. While the name “Civic” may return images of economy-sized penalty boxes, today’s Civic has more in common with the Accord than it does with yesteryear’s small cars. The 2020 Civic’s a budget car hiding in plain sight while the Type R is a race-ready rocket. Like last year, the Civic is available in LX, Sport, EX, and Touring trim levels spread among sedan, coupe, and hatchback body styles. The Civic Si is available as a coupe or sedan, the Civic Type R is hatchback only.

For this review we’ll be focusing on the potent Type R which was our test vehicle. Our hatchback and sedan review can be found here, while the sensational Si review can be found here.  Compared to the coupe and hatchback, the sedan is more reserved in its style and more comfortable in the rear. A base 2.0-liter inline-4 is standard in the sedan and coupe while the 1.5-liter turbo-4 makes 174 hp is a must-have option, and it’s more efficient according to the EPA’s calculators. We highly recommend the Turbo. The Civic Si draws power from the same engine with higher output turbos to make more than 200 hp. Meanwhile the wild Type R makes more than 300 hp, and it’s a serious performer.

The Civic lineup is broad and deep, with plenty of options, although some are more grown-up than others. Over time, the Civic has evolved from a hatchback to a sedan to a coupe. For the current generation, it’s all three. The Type R however is only available as a hatchback, which happens to be our favorite body style for being more practical and sleeker. The sedan’s shape channels the Accord, other fastback sedans, and even some luxury sedans, with a sleek roofline. The sedan and hatchback are closely related in profile, the sedan dips right at the tail to offer a small trunk, and the hatch just keeps going.

The Civic Type R is the performance king again this year, with a 2.0-liter turbo-4 huffing and puffing 306 hp to light up its front tires. Power is sent through a 6-speed manual transmission with short, accurate throws, and a helical limited-slip differential at the front. Adaptive dampers toggle between normal and sport settings, and despite its wild looks, the Type R is mostly comfortable to drive daily. It whips up to 60 mph in less than 6 seconds, but its best trick is drawing tight lines around corners and tossing through narrow roads with ease. Subtle but effective changes touch up the Type R’s suspension’s roots. Honda says the car’s adjustable adaptive dampers respond 10 times more quickly than before. It’s fitted new lower ball joints and bushings in front, and new rear B-arm bushings in back, for better toe-in and better steering feel.

The 2020 Civic is cheap to buy, and cheap to run so there’s not a bad pick. There are more than a dozen variants with separate ratings, but most don’t fall far from that mark. The most efficient Civic’s are equipped with the 1.5-liter turbo-4 that reaches about 35 mpg combined in coupe, hatchback, and sedan body styles. Most of those models exceed 40 mpg on the highway, according to the EPA. Opting for a manual transmission in most body styles doesn’t significantly dent fuel economy, just 1 mpg combined. Meanwhile the potent manual-only Type R earns 22/28/25 mpg ratings from the EPA, there’s a price to pay for exhilerating performance.

Three body styles. Five stars. And all of them can stop themselves. Federal and independent testers gave the Civic top marks for crashworthiness, including a five-star overall score from the feds. The IIHS gave the Civics, all of the body styles, top “Good” scores on its crash battery, including both driver- and passenger-side small impact crashes. The Civic’s standard automatic emergency braking system was also rated “Superior” at avoiding forward crashes at 12 and 25 mph. The lone demerit is the headlights equipped on most Civics, regardless of trim or body style, which rate “Poor.” But the LED reflector headlights on the Touring trim. Si, and Type R models are rated at “Good,” which earns the 2020 Civic a Top Safety Pick from the IIHS. In addition to automatic emergency braking, all Civics get a full suite of active safety features including active lane control, adaptive cruise control, and automatic high beams.

Inside, the Civic is thoroughly modern with many interior storage bins, cubbies, and cupholders. The low and wide dash isn’t nearly as sedate as it has been in the past, it’s visually separated with horizontal bands of glossy black plastic or brushed trim, and a 7.0-inch touchscreen on most versions breaks up the space. The Civic’s interior materials and quality races past its budget-car roots. Most of the surfaces are high-quality, with low-sheen plastics and soft interior materials, long game are the days of stark, boring, and grainy plastics from the past.

The Civic’s compact footprint belies its spacious cabin. Up front, the driver and front-seat passenger have a better view than a rooftop patio. The dash is low and the seats are comfortable, shod in durable cloth in LX, Sport, and EX trims. Leather-clad, power-adjustable seats are available on EX-L and Touring trims, while Si and Type R get their own grippy fabrics. Rear-seat riders get uncommonly good leg room, more than 36 inches, with comfortable and supportive rear outboard seats that will fit actual adults. We wouldn’t advise sticking three broad-shouldered adults in back for long, but it works in a pinch. The Type R hatchback offers 25.7 cubic feet with the second row in place, 46.2 with the second row tumbled forward.

The 2020 Honda Civic starts at $20,680, which makes it a strong value for budget shoppers. We appreciate that and the variety that three body styles, four powertrains, and dozens of options along the way provide. The list of possible Civics is long this year. Available as a four-door sedan, five-door hatchback, or two-door coupe, in LX, Sport, EX, or Touring trims, or as a hotter Si sedan or coupe or hottest Type R hatchback. Opting for a coupe over a similarly priced sedan adds $200 to $300 to LX and Sport trims; opting for a hatchback, which is only available with a 1.5-liter turbo-4, adds anywhere from $700 to $1,500 to a similarly equipped coupe or sedan, depending on trim level. The Si sedan and coupes are priced identically, $25,930.

The 2020 Honda Civic Type R is the hot-hatch icon, there isn’t a better example to be found. With 306 horsepower, a slick-shifting 6-speed manual, and race-bred suspension; the Type R is always ready and willing to play whether it be on your commute or a track. The fact that it exudes Honda refinement and reliability only further solidify the fact that the Type R is the best Civic ever.