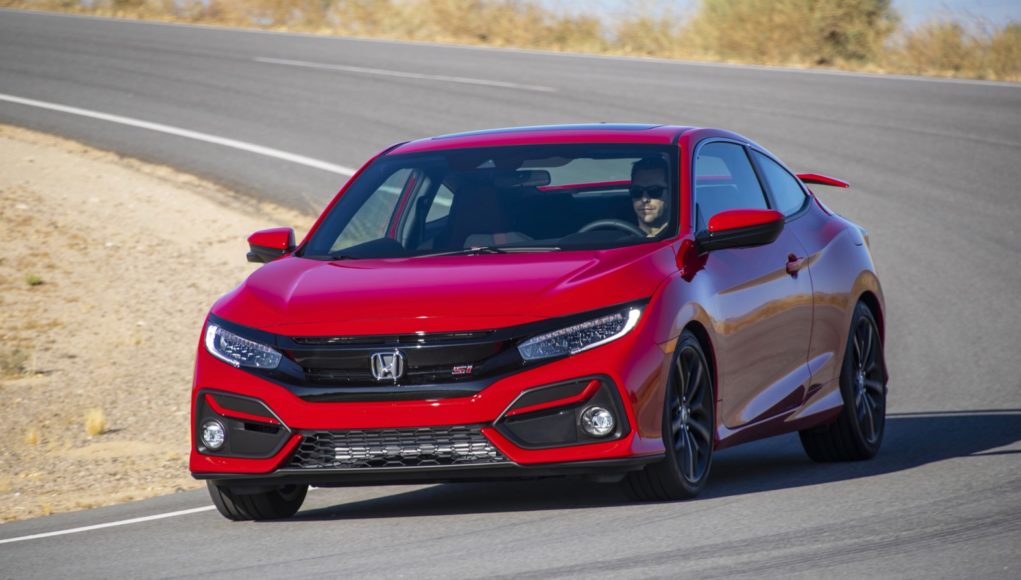 The Honda Civic Si has continued to hold a sweet spot in our hearts, since it offers the near perfect combination of practicality with a lot of fun thrown in, at an easy to swallow price. For the 2020 model year the Civic Si sedan and coupe have received a small refresh that will keep it competitive with other rivals, like the Volkswagen GTI, Jetta GLI and Subaru WRX.

On the outside you’ll notice some small design tweaks to the 2020 Civic Si’s front and rear bumpers, standard LED headlights and new black 18-inch wheels. If you already love the styling of the current Civic Si, the updates aren’t going to turn you off, but if you’re at the other end of the spectrum, the overall design of the Civic Si can be a little polarizing. Definitely less polarizing than the hotter Civic Type R, but the overall look does stand out more than VW’s performance models.

Inside the interior has more red accents and updated seats. The 2020 Civic Si also now has more driver assistance tech features, like automatic emergency braking, lane keeping assist and adaptive cruise control. We do wish that Honda would finally ditch the LaneWatch system for a more traditional and useful blind spot monitor, but it looks like that won’t happen until the next-generation Civic arrives.

The Civic Si doesn’t come with any options, other than summer tires, which is part the Civic Si’s value, but if you want more luxurious options like leather seats or a navigation system you’ll be disappointed. But then again, the Civic Si isn’t designed to be a luxury car and instead is for buyers that want a compact car with a bit more fun under the hood. The Civic Si also has ample space for passengers in the front or back. We managed to fit several “taller” adults in the rear of the Civic Si coupe and neither of them complained about a lack of legroom. On the tech front, the Civic Si also comes standard with Apple CarPlay and Android Auto.

Under the hood, the 2020 Civic Si is powered by the same 1.5-liter turbocharged four-cylinder engine as before, which generates 205 horsepower and 192 lb-ft. of torque. The four-cylinder engine is only available with a six-speed manual transmission, which now has a quicker final drive ratio. One of the biggest things preventing the Civic Si from being added to more garages is the lack of an automatic transmission, which its rivals offer. With that said, the six-speed manual is a joy.

The 1.5-liter engine could use a bit more power at the low end, since there is a bit of turbo lag when the revs are at the low end. Although its rivals do offer more power on paper than the Civic Si, we hardly ever said that we wished it had more power on tap. The 1.5-liter engine manages to find a nice balance between sport and fuel efficiency. When you’re ready to have fun, the engine is up for it, especially when you press the Sport button, but then when you want a more subdued driving experience, the engine is quiet and fuel efficient.

Speaking of fuel efficiency, the Civic Si is rated at 26 mpg in the city, 36 mpg on the highway and 30 mpg combined.

On the road, the Civic Si is one of the best front wheel drive cars you can buy, with the exception of the Civic Type R. Compared to the regular Civic, the Civic Si not only has the more powerful engine, but it also has a sportier suspension with adaptive dampers and retuned steering. The suspension does a good job of keeping the Civic Si planted to the road, but it isn’t harsh. The steering also has a nice feel with great feedback. Overall you’ll have a hard time finding this much fun in any other car with a $26,155 price tag.

The 2020 Honda Civic Si is hard to beat when you factor in how much fun it is to drive and at the same time it easily doubles as a practical commuter car. While we all dream of one day having multiple cars in our garage, the reality is that 90 percent of us can only afford on car and if that’s the case, the Civic Si is the perfect car to own if you’re on a budget.