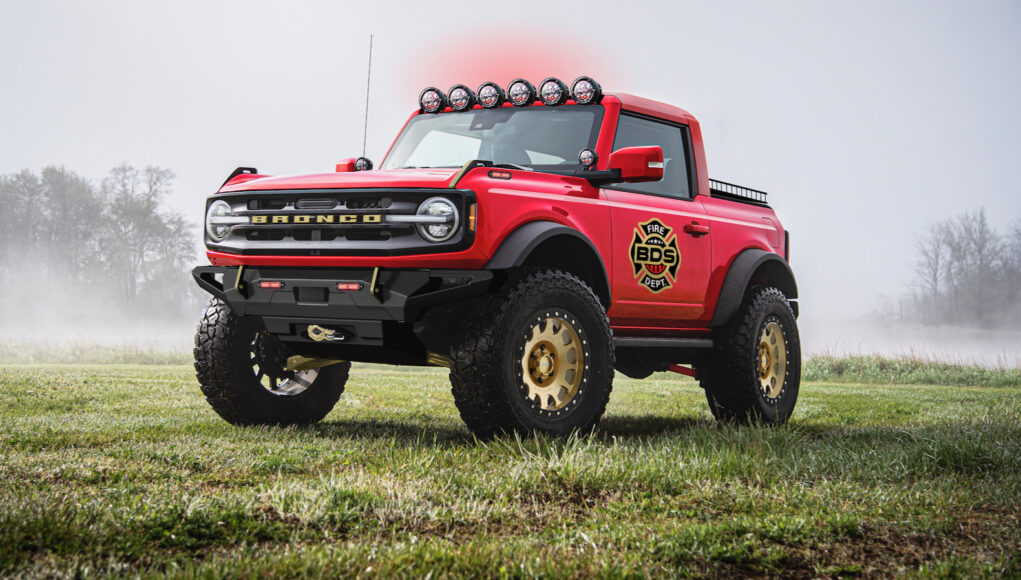 The SEMA Show is back on again after it was canceled last year. The Specialty Equipment Market Association trade show kicks off in Las Vegas on November 2 and Ford has announced that it’s bringing six unique Bronco SUVs to it. Four are custom Broncos, while two are based on the Bronco Sport.

Ford is also going to show off a line of new accessories at SEMA, like a new Ford Performance Parts front drive unit that supports up to a 5.38:1 gearset, severe-duty steering rack and tie rod ends. Ford is also bringing new 17-inch Method Race Wheel sets for the Bronco. Lastly new tuning for the 2.3-liter EcoBoost four-cylinder engine that can be uploaded via a Pro-Cal 4 scan tool to the OBDII port.

The 2021 Bronco by BDS Suspensions is a red two-door Bronco that is designed to be a first responder vehicle. It has a 4-inch BDS upper control arm system, BDS rear adjustable control arms and track bar, swaybar disconnect and 37-inch BFGoodrich KM3 tires to make it the ultimate fire truck. It also gets CrawlTek Revolution bumpers with a recessed winch mount, recovery hooks and belly skid up front, plus winch mount and recovery hooks in back.

Next up is the Bronco by Tucci Hot Roads, which is based on the four-door Badlands series Bronco. It’s designed to be the perfect snowmobile with its 88-series tracks instead of tires. It also gets a swing gate storage, flat snowboard rack and Yakima LockNLoad platform roof rack system. A Rigid light bar has also been added to light up the road ahead.

The last Bronco is the Bronco Baja Forged by LGE-CTS Motorsports, which was created by Theresa Contreras, a veteran Ford SEMA builder, designer and founder of Baja Forged Parts. It’s based on the four-door Outer Banks model and gets an onboard fridge, sound bar, cargo organizer and Baja Forged bumpers. It also gets an Icon Vehicle Dynamics 3.0 suspension lift, off-rad rock lights, a tailgate folding table, and Baja Forged fender flares and spare tire cover.

Lastly the Bronco Sport by CGS Performance Products is also based on the Badlands model. It gets unique seat covers, a rear seat vault, an underbody light kit, fender flares, a rear spoiler and rock lights. Performance enhancements include a CGS Performance cold air intake and a ceramic-coated exhaust system.