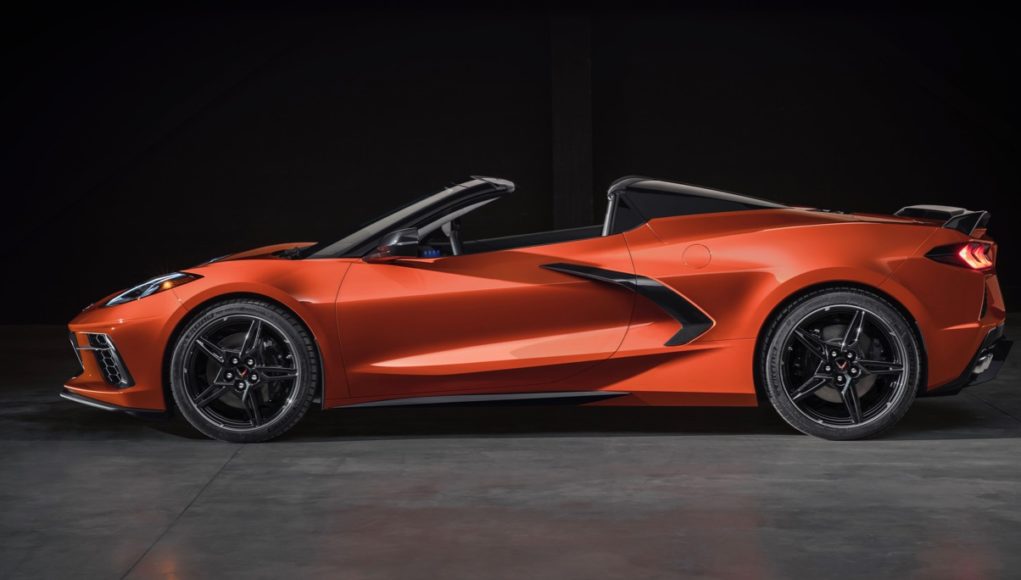 We were stunned when Chevy took the wraps off the first ever mid-engined Corvette and now its not stopping there. Chevy has unveiled the first ever hardtop Corvette convertible with the debut of the 2020 Corvette Stingray Convertible.

Instead of simply just chopping the top off the standard 2020 Corvette Stingray, Chevy says that the latest Corvette was “was engineered first and foremost as a convertible.” The good news is that even with the retractable hardtop, the Corvette Stingray convertible has the same cargo capacity as the coupe.

“Our goal from the beginning was to make sure customers didn’t have to sacrifice any functionality, performance or comfort when choosing the hardtop convertible,” said Josh Holder, Corvette program engineering manager. “We managed to keep the same design theme as the coupe, as well as the exceptional storage capacity and track capability.”

The Corvette Stingray Convertible features a two-piece top that can be activated at speeds up to 30 mph and retract in only 16 seconds.The top is powered by six electric motors, which Chevy says are more reliable than the previous hydraulic systems. A body-colored roof is standard, while Carbon Flash metallic-painted nacelles and roof are optional. A divider glass window in the middle of the vehicle can be powered adjusted with the top up or down.

The 2020 Corvette Stingray Convertible is powered by the same 6.2L Small Block V-8 LT2 engine as the coupe, that’s mated to an eight-speed automatic transmission. It generates 495 horsepower and 470 lb-ft of torque when equipped with performance exhaust.

The 2020 Chevrolet Corvette Stingray coupe goes into production in late 2019, with the convertible following in by the end of the first quarter of 2020.

2021 Chevy Corvette is getting new color and stripe options

2021 Chevy Camaro is getting a few updates

Is an electric Chevy Camaro in the works?