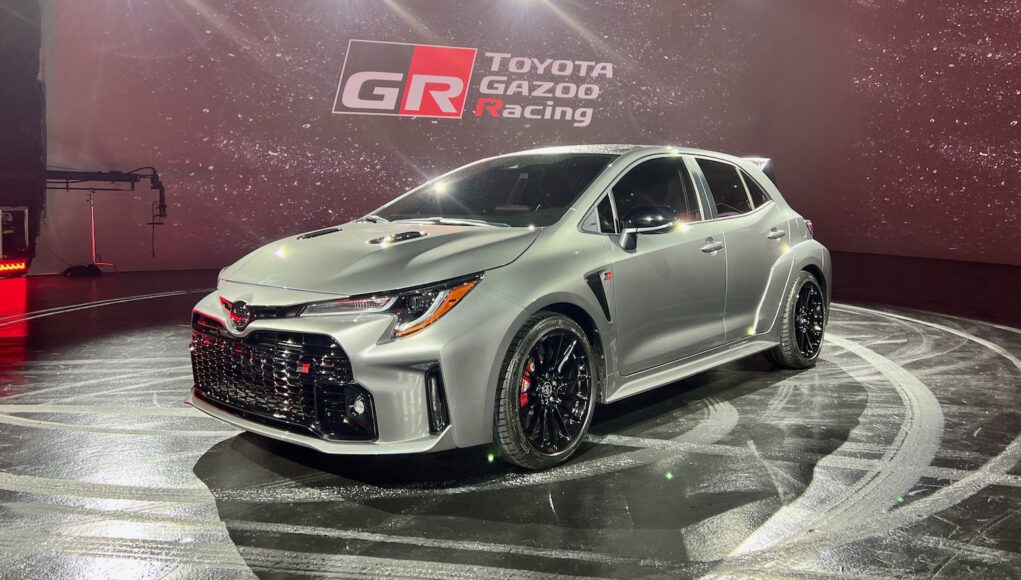 We were sad when Toyota confirmed that it had no plans to bring the GR Yaris to the US, but not all is lost, with the debut of the 2023 GR Corolla. For decades the Corolla has been a reliable compact, but at the same time no has ever called it exciting, well at least since the days of the AE86. Now Toyota has proven that it can turn the Corolla into a worthy hot hatch with the GR Corolla.

The GR Corolla has been a long time coming, since Toyota continued to drop teaser after teaser. Toyota labored over every detail with  Toyota CEO Akio Toyoda, a race driver himself making certain that he signed off on the GR Corolla before the ink dried.

Originally it was thought that the GR Corolla would simply get the same 1.6-liter three-cylinder as the GR Yaris, but instead Toyota boosted the power in the GR Corolla to 300 horsepower and 273 lb-ft of torque of torque. That’s an improvement of 43 hp and 8 lb-ft compared to the GR Yaris. Some of that extra power comes from a more efficient exhaust system with a three part muffler with three exhaust tips. The exhaust setup is unique with two outboard round outlets and a centrally mounted oval outlet.

The GR Corolla is only available with a six-speed manual, although Toyota did state that if the market demands it, an automatic could be offered in the future. But for now, the GR Corolla is helping keep the manual alive. What’s even more exciting is the GR-Four all-wheel-drive system with its adjustable torque split. The torque split can be set for 60/40, 50/50, or 30/70. The Circuit Edition also adds front and rear Torsen mechanical limited-slip differentials, which are available as part of the Performance package on the base Core trim level.

Toyota has not released the 0-60 mph time for the GR Corolla, but it should be faster than the GR Yaris, which can do it in 5.5 seconds.

On the outside it’s easy to tell the GR Corolla apart from the standard Corolla hatchback. Its new widebody look makes it 1.5-inches longer, 2.4-inches wider, and 0.1-inch taller. The good news is that all that aggressive styling is also functional. It weighs in at 3,249 pounds, but the Circuit Edition does get a unique carbon fiber roof to save a few pounds. The first-year only Circuit Edition also adds a bigger rear spoiler, hood vents and fake suede seats.

In addition to the sportier seats, the GR Corolla also gets a 12.3-inch digital gauge cluster that provides info, like the all-wheel drive mode, turbo pressure, and gear position. In the center there’s also an 8.0-inch touchscreen that runs on Toyota’s latest and much improved infotainment system. Wireless Apple CarPlay and Android Auto are also included. Just like the standard hatchback, the rear is a bit snug.

The 2023 Toyota GR Corolla is slated to arrive this fall, but Toyota has not announced the pricing. The first version to arrive will be the Core model, with the limited edition Circuit Edition arriving in 2023. Toyota hopes to sell around 6,000 units in its first year.