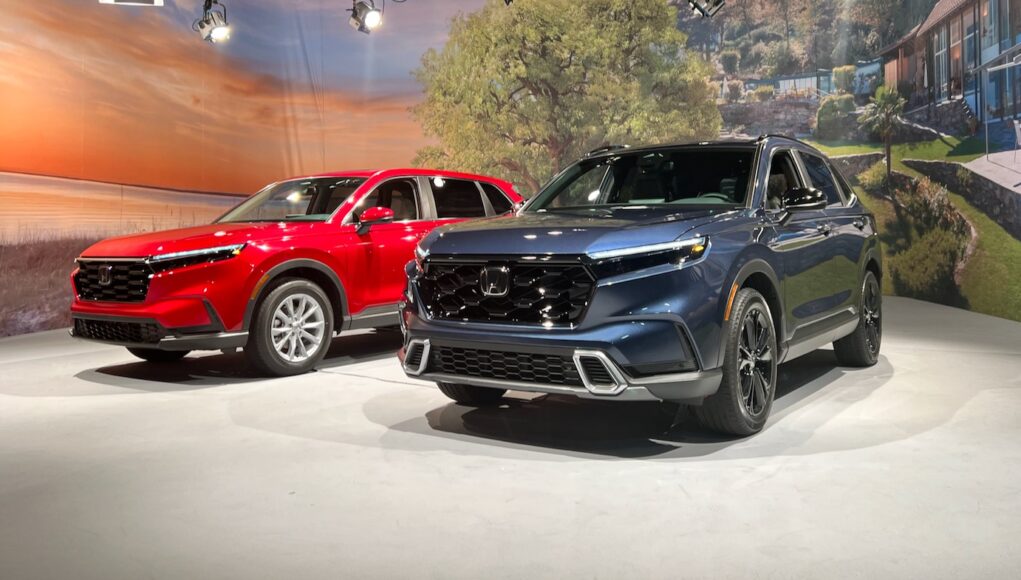 This year Honda is revamping its entire crossover lineup. The first was the 2023 HR-V, which is already on sale and now Honda is focusing its attention on the best-selling vehicle in its lineup, the CR-V. For the 2023 model year, the CR-V now features a more sophisticated and rugged exterior, an improved interior and refined powertrains.

On the outside, the 2023 CR-V looks more upscale than its predecessor with cleaner lines, a more prominent grille and a longer hood. The A-pillars have been pushed back by 4.7-inches to give it a sportier look than before. The 2023 CR-V has also grown in size, since its now 2.7-inches longer than before with a 1.6-inch longer wheelbase. It’s width has also been increased by 0.4-inches, which gives it a more planted look. The new look is an improvement over the last generation, but not a huge departure. At the rear, the CR-V’s trademark vertical lights let you know that this is still a CR-V.

There are two distinct exterior looks with the EX and EX-L offering a more conservative look. The Sport and Sport Touring models take the sportier route with more aggressive front and rear fascias. In a unique take, the Sport and Sport Touring models are only available with the hybrid powertrain. Honda expects the CR-V hybrid to account for more of the CR-V’s sales with up to 50 percent of buyers choosing the hybrid.

While the exterior of the current CR-V still held its own against rivals, like the Toyota RAV4 and Nissan Rogue, the CR-V’s interior was definitely showing its age. Fortunately Honda has completely revamped the interior using the same design philosophy as the Civic and new HR-V. If you’ve spent any time in the Civic, you will easily recognize some of the design traits, like its honeycomb mesh pattern over the air vents and the similar infotainment system.

The CR-V’s interior has received big upgrades in the tech department. Starting with a new 7-inch digital instrument cluster, which is positioned next to a traditional speedometer. It’s interesting that the CR-V doesn’t offer the same fully digital cluster as the Civic, which seems like an easy miss. An even bigger improvement is the infotainment system. The last generation looked incredibly dated and the overall experience was clunky. Now the CR-V comes standard with a 7-inch touchscreen, while a 9-inch system comes standard on the EX-L and Sport Touring models. The infotainment system now looks modern and it’s easy to use. If you opt for the EX-L or Sport Touring trim levels you also get wireless Apple CarPlay and Android Auto and a wireless charger. One other big change is the former push button gear selector on the hybrid has been swapped out for a more traditional gear lever. Lastly the top spec CR-V Sport Touring gets a 12-speaker Bose audio system. Overall the interior now feels more upscale.

With its extended wheelbase, it’s no surprise that the interior is a bit bigger. There’s 0.6-inches more rear legroom and rear seat passengers will also enjoy the reclining seats with their eight different angles. Honda says that the CR-V’s new front “Body Stabilizing Seats” reduce fatigue. At the rear there’s more cargo room with 36.3 cubic feet of space behind the rear seats, plus the rear floor can be lowered to expand the space to 39.3 cubic feet. With the rear seats folded the space expands to 76.5 cubic feet.

Under the hood, the powertrains aren’t dramatically different than the current CR-V. The EX and EX-L models are powered by the familiar turbocharged 1.5-liter four-cylinder with 190 horsepower and 179 pound-feet of torque, which is mated to a CVT. Honda says that the engine has been updated with a new turbocharger and a 4-2 exhaust port cylinder head. Its torque peak now arrives 300 rpm earlier to improve the responsiveness of the powertrain. The available all-wheel drive system can now send up to 50 percent of the torque to the rear wheels, but there isn’t torque vectoring like in the Passport or Pilot.

The more fuel efficient option is the CR-V hybrid, which is available in Sport and Sport Touring trim levels. It is powered by a fourth-generation two-motor hybrid system that mates a 2.0-liter Atkinson cycle 4-cylinder engine with two electric motors. The hybrid powertrain generates 204 horsepower (a 3 hp increase) and 247 lb-ft. of torque (an increase of 15 lb-ft.). The 2023 CR-V hybrid gets a higher top speed at 115 mph vs 86 mph. Honda says that the updated powertrain is now more refined and the CR-V hybrid can now tow up to 1,000 pounds.

The small powertrain updates mean that the CR-V will likely drive just like the current generation, with some slight improvements in responsiveness and efficiency. The CR-V also gets some suspension and steering updates to make it more fun to drive with improved ride quality.

Lastly the CR-V now has a Hill Descent control system that can be set between 2-12 mph.

On the safety front, the 2023 CR-V comes standard with the Honda Sensing suite, which now has a new wide-angle camera and millimeter-wave radar. The new camera improves the collision prevention system. A blind-spot monitor is standard, in addition to Traffic Jam Assist, Traffic Sign recognition, adaptive cruise control and lane keeping assist. The CR-V also gets the same driver and passenger front airbags as the Civic, which are designed to further prevent brain trauma in frontal collisions. Lastly there’s a rear seat reminder system and a Driver Attention Monitor.

The 2023 Honda CR-V is slated to arrive this summer, while the CR-V hybrid will arrive later this year.