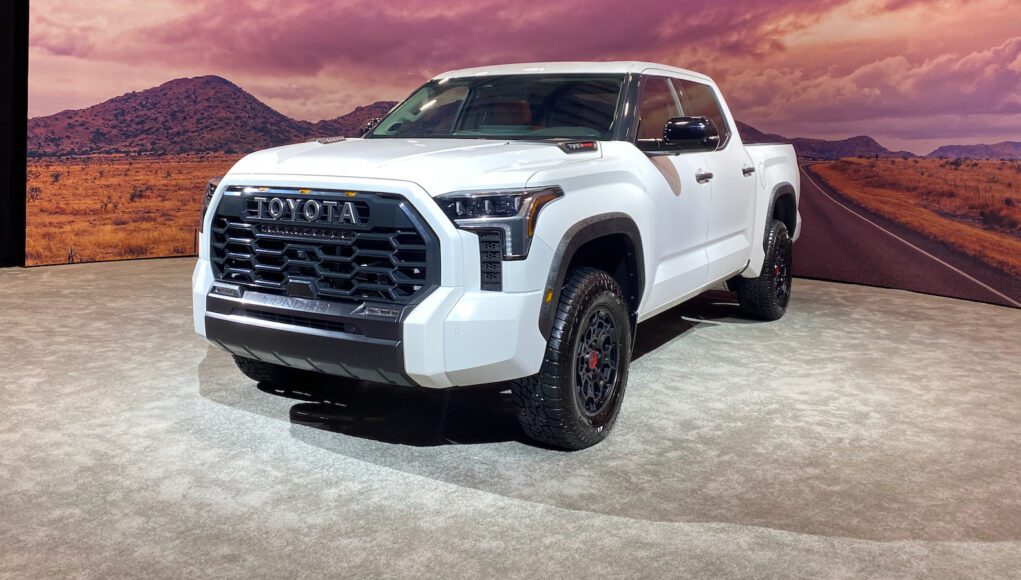 The last time Toyota came out with an all-new Tundra was all the way back in 2007, so it’s big news that Toyota has completely redesigned the full size truck for the 2022 model year. Toyota says that the 2022 Tundra is new from the ground up and from our initial impressions, it’s a huge step forward from its predecessor.

The 2022 Tundra was designed in America with a “Technical Muscle” design theme. Toyota says that the new Tundra is not as focused on buyers that need their trucks for working and instead it is designed more for adventure seekers. It’s designed to be a fun active truck for buyers that like to have fun adventures. Overall the exterior is bolder and more rugged than the outgoing Tundra. This is especially evident with the off-road hungry Tundra TRD Pro.

Inside the 2022 Tundra gets a more modern, spacious and luxurious interior. Toyota says that it went with a wide horizontal design them rather than a vertical look, like some of its rivals. Toyota also says that its designers started designing the interior from the higher trim levels and then worked its way down. It’s evident with the more modern interior with better materials that make it feel more luxurious than before. The interior also now feels massive, especially from the rear seat and on non-hybrid versions there’s storage underneath the rear seats.

The interior is also packed with better tech features. The Tundra comes standard with an 8-inch touchscreen, but there’s an available 14-inch display, which operates a new system that is way better than anything else in Toyota’s current lineup. The good news is that the new infotainment system will eventually be offered in Toyota’s other models. There’s also a new 12.3-inch digital gauge cluster. There’s also wireless Apple CarPlay and Android Auto and wireless charging for your phone. The addition of both the digital gauge cluster and the new infotainment system is a big improvement, which makes the Tundra look and feel more modern.

Now for what’s under the hood. Toyota gave us a first look at the new Tundra, but unfortunately we weren’t able to drive it yet. But we can’t wait to see how it performs, given how impressive the new engine lineup is. The standard engine is a new i-Force twin-turbocharged 3.5-liter V6 with 389 horsepower and 479 pound-feet of torque. That’s an increase of 8 hp and 78 lb-ft. over the old 5.7-liter V8. The more exciting new addition is the i-Force Max powertrain, which mated the 3.5-liter V6 to an electric motor to create the first ever Tundra hybrid. The hybrid powertrain generates 437 hp and 583 lb-ft. of torque. Both engines are mated to a new 10-speed automatic transmission.

Toyota has not announced the fuel economy specs for either powertrain. The base engine can tow up to 12,000 pounds, while the hybrid powertrain can tow a few hundred pounds less. There are also two towing modes. To compare, the Ford F-150 can tow up to 14,000 pounds and the Chevy Silverado can tow up to 13,300 pounds.

Under the skin the new Tundra also gets a multi-link rear suspension and an available adaptive suspension. A load leveling air suspension is also available at the rear to help aid with towing.

On the safety front, the Tundra comes standard with Toyota Safety Sense 2.5, which includes automatic emergency braking, adaptive cruise control, lane tracing assist, and road sign assist. The Tundra is also available with a new 360 degree camera system that makes it easier to park and maneuver around obstacles.

Toyota has not announced the pricing for the 2022 Tundra, but it will arrive by the end of the year. Stay tuned for our first drive review.