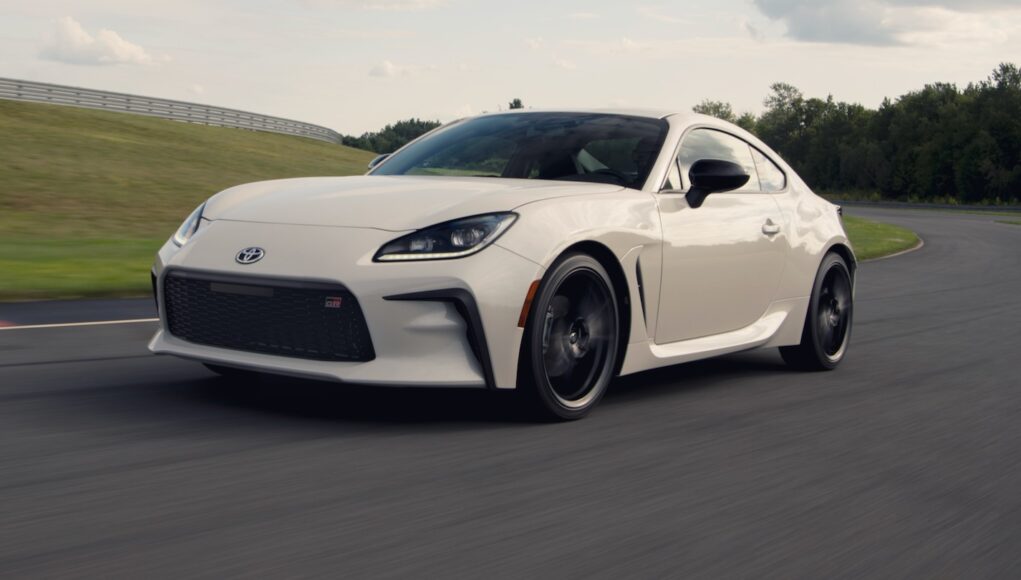 Today all the news surrounds electric vehicles and buyer’s love of the SUV. Although it may seem like sports cars are dead, there are still a few of them around, like the Toyota GR86. The 2022 GR86 is an affordable, small coupe that’s made for driving enthusiasts that want to add a bit more fun to their daily commute.

The 2022 GR86 builds on the successes of the first generation Scion FR-S/ Toyota 86 with a larger engine, that provides more power and a revised chassis that makes it even more fun to drive. The GR86 is based on the same platform as the outgoing 86, but on the outside there are some big styling improvements with its sleeker roofline and more sculpted body. To keep weight down, the GR86 also gets an aluminum roof and fenders, in addition to the aluminum hood.

Speaking of the hood, underneath it there’s a new 2.4-liter flat-four that replaces the old 2.0-liter engine. For fans that wished the 86 had more power, Toyota has answered your wishes by giving the GR86 228 horsepower, up from 200 in the previous automatic version and 205 in the manual. The available 184 pound-feet of torque is available at 3,700 rpm, compared to the previous engine’s 156 lb-ft., that wasn’t available until 5,400 rpm.

228 horsepower may still not seem like a lot, but the extra horsepower and improved torque curve, does make the GR86 feel more fun to drive than before. The engine is more responsive and around town you don’t have to push it into the high rev range to get the GR86 moving down the road. A speaker inside also amplifies the sound of the engine, depending on the drive mode.

Just like before, the GR86 is available with either a six-speed manual or six-speed automatic with steering wheel paddle shifters. The automatic has been updated with a new torque converter and additional clutch discs. Of course we prefer the manual, but the automatic doesn’t suck. We do wish the GR86 came with active rev matching. The GR86 also comes standard with a Torsen limited-slip differential.

Toyota’s engineers worked hard to improve the GR86’s chassis to make it even more capable on a winding road. The revised damper tuning manages to find the perfect balance to make sure the ride isn’t too hard, but also keep body roll in check. There’s less body roll through corners than its predecessor. The new electronic power steering system is quick and perfectly weighted. Altogether the chassis updates make the GR86 even more engaging to drive than before.

While some sports car buyers will balk at the GR86’s power specs, the GR86 is more than that. Just like the Mazda MX-5 Miata, the GR86 is a fun small sports car that’s immensely fun to throw around a corner. The improved steering and suspension make the GR86 the perfect track companion.

Stopping power is provided by 11.6-inch discs at the front and 11.4-inches at the rear. The brakes are excellent and have minimal fade. If you opt for the Premium trim level you get better Michelin Pilot Sport 4 tires than the standard Michelin HP Primacy all-season tires on the base GR86.

Moving past the powertrain and chassis improvements and into the interior there are some nice updates. The biggest change you’ll notice is the new 8-inch infotainment system that no longer looks like an afterthought. The screen looks more up to date and features Apple CarPlay and Android Auto. The 7-inch digital gauge cluster is also new and changes its layout based on the Normal, Sport and Track modes. Toyota also gave the GR86 more high-quality materials and if you go for the Premium trim you also get an eight-speaker audio system.

Since the GR86 is about the same size as the old 86, we aren’t surprised that the interior is a bit cramped. The rear seats are there for show, but good luck trying to fit even your shortest friend back there.

One big ding on the outgoing 86 is that it wasn’t available with many of the driver-assistance features that we’ve come to expect. The GR86 is available with these features, like automatic emergency braking, adaptive cruise control and lane-departure warning, but only if you choose the automatic transmission.

The pricing for the 2022 Toyota GR86 starts at an affordable $28,725, including destination for the base car, while the GR86 Premium starts at $31,325. The Premium trim adds a duckbill rear spoiler, heated ultrasuede and leather front seats, an eight speaker audio system and a blind spot monitor. If you want an even more special GR86, there’s a rumor that the 2023 GR86 is getting a 10th Anniversary edition.

At the end of the day, Toyota kept everything we loved about the FR-S and 86 and improved most of its shortcomings. The extra power under the hood, better handling and improved tech features make the GR86 hard to pass up.