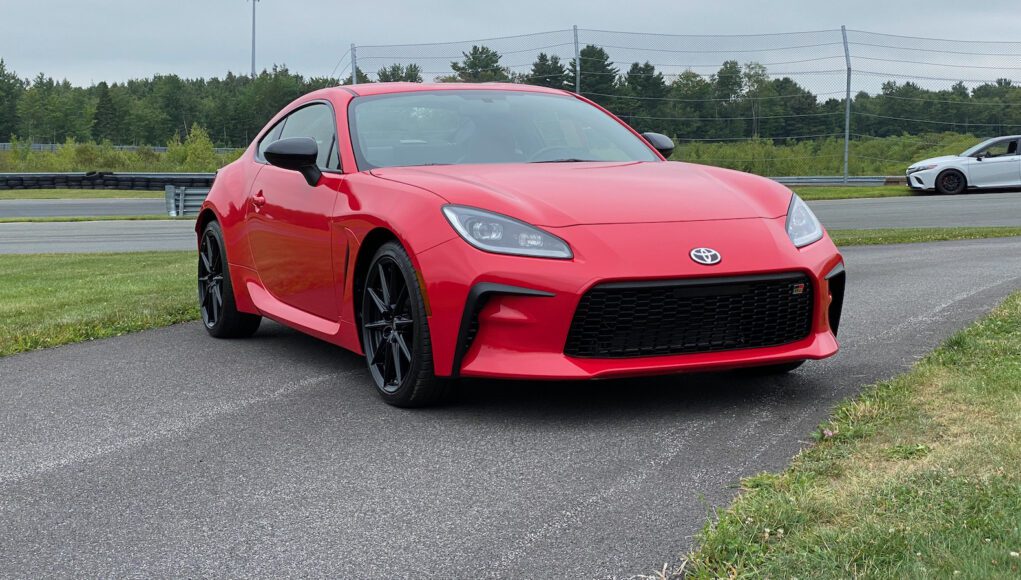 Today all that we seem to talk about are crossovers and electric vehicles, so it’s good news when a new sports car with a traditional internal combustion engine grabs the headlines. What we have here is the 2022 Toyota GR86, which is the successor to the Scion FR-S and Toyota 86 models. Just like before, the GR86 shares its DNA with the Subaru BRZ and once again both models are powered by a four-cylinder boxer engine that powers the rear wheels.

It’s been a decade since the Toyota 86/ Scion FR-S and Subaru BRZ arrived and since then both coupes have satisfied buyers that have wanted an inexpensive, rear-wheel drive sports car. If you’re worried that the new GR 86 might miss some of the magic from the first one, the good news is that it’s just as fun as the original.

There were rumors that the new coupes would get a turbocharged four-cylinder, but that isn’t the case. Instead the GR86 is powered by a new 2.4-liter four-cylinder boxer engine that generates 228 horsepower and 184 pound-feet of torque, which is 23 hp and 28 lb-ft. more than the old 2.0-liter engine. While we welcome the extra power, the big news here is that peak torque is available at 3,700 rpm, instead of 6,400 rpm, which provides more thrust in all driving situations.

Just like before, the GR86 is available with either a six-speed manual or six-speed automatic transmission. The manual has been updated with a carbon synchronizer to improve it when you’re shifting into fourth gear, plus new bearings and lower-viscocity fluid. The automatic gets a higher-capacity torque converter to handle the extra power.

No one buys a GR86 because of its fuel economy specs, but Toyota estimates that the manual GR86 will get 19 mpg in the city and 26 mpg on the highway. The automatic is estimated at 20 mpg city and 30 mpg highway.

Toyota rented out the Monticello Motor Club in New York for us to see how the GR 86 is an improvement over the old 86. It even had both generations on the track for us to drive back-to-back. The GR86 feels like it has more oomph than the old car, thanks to that torque rating. You have to work the last generation harder to get it moving around the track, since in the middle of its rev range there isn’t much power. It also has a nicer sounding exhaust, although we weren’t able to figure out how much of the sound piped into the interior was fake.

The throttle response has improved and the new slicker shifting manual is easy to operate around the track. The updated automatic transmission is also smoother, but we did notice a slightly long delay when shifting with the steering wheel-mounted paddle shifters.

Just like before the GR86 isn’t about 0-60 mph times, although it can accelerate from 0-60 mph in 6.1 seconds with the manual. Instead the GR86 is more about the overall driving experience. Its chassis has been updated with new front crossmembers and a rear ring structure to improve its handling – making it more fun to fling around the track. The suspension has also been updated with new dampers, springs and bigger antiroll bars. There’s also a new electric power steering system that feels more direct than before.

On the track you’ll have a hard time not smiling, since the GR86 is so much fun to toss around the corners. The steering is tighter and more responsive and there’s minimal body roll. Driving both generations back-to-back, it’s easy to see how much more refined the GR86 is than its predecessor.

The base model rides on Primacy HP tires, which have less grip than the Pilot Sport 4S tires on the top Premium trim level. We noticed that the base GR86 slides around the track more than the top version, but both versions are so much dun to drive thanks to the improved chassis.

Inside the interior has been improved with a new 8-inch infotainment system with Apple CarPlay and Android Auto. The base car gets a six-speaker audio system, while the Premium gets an eight-speaker system. The only bad news on the tech front is that the automatic emergency braking, adaptive cruise control and lane-departure warning is only available on the automatic equipped GR86.

Just like before the front seats are very supportive and the Premium version version gets Alcantara and leather seats. The rear seats are just like before, since there isn’t much room back there for anything besides your gear. With the back seats folded, Toyota says that there’s enough cargo space to carry an extra set of wheels when you’re headed to the track.

Toyota hasn’t announced the pricing for the 2022 GR86, but it says that it will arrive under $30,000 including destination. The GR86 will arrive at dealers in November.

At the end of or day, at Monticello, it was easy to see how improved the GR86 is over its predecessor. Toyota gave us a bit more power under the hood, an improved chassis and a better interior, all without ruining what people love so much about the GR86 – its fun to drive factor.