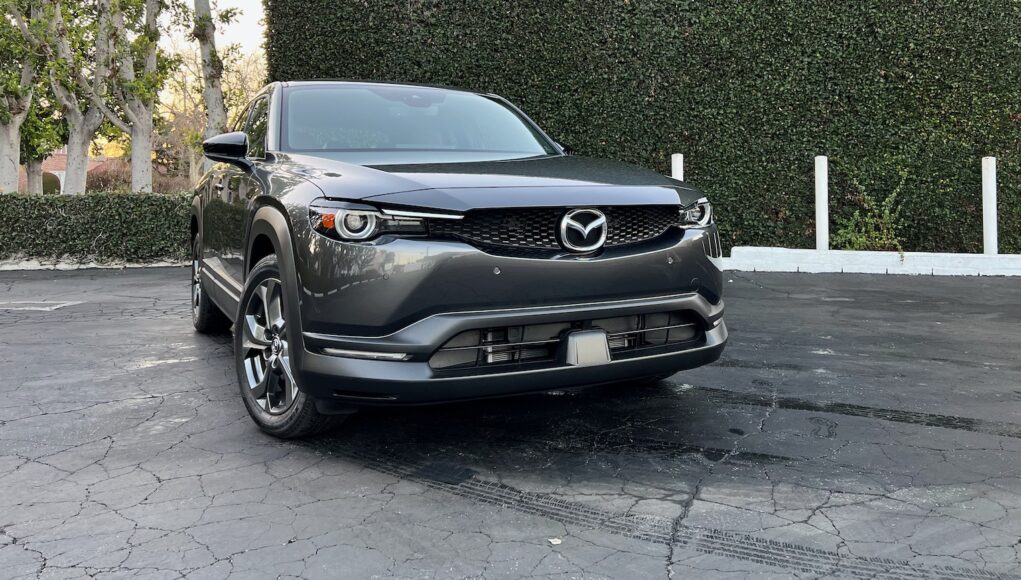 Compared to its rivals, Mazda surprisingly hasn’t released an EV until now. The 2022 Mazda MX-30 is a small electric SUV that attempts to stand out with its stylish exterior, nicely appointed interior and lively handling. While there are plenty of things to like about the MX-30, there are some big compromises that are going to keep the MX-30 from landing on many EV buyer’s lists.

The MX-30 is based on the same platform as the CX-30, but it long hood, rear-hinged rear doors and sleek roofline set it apart from its sibling. We still don’t know why Mazda didn’t just create an all-electric version of the CX-30 rather than creating a different model that’s less spacious. The rear doors are similar to the BMW i3 and don’t really make it that much easier to get in the back. Rear-hinged doors always cause an issue when you’re parked next to another vehicle in a parking lot. Good luck getting out at the same time as your rear passenger. The rear doors also give the MX-30 big blind spots.

Once you’re in the back seat there’s a lack of headroom and legroom, which makes it feel very cramped. If you’re lucky enough to ride in the front, the comfortable front seats are wrapped in brown leatherette and black fabric. The upscale feeling interior also uses sustainable materials, like a recycled wool like fabric on the doors and cork on the center console. The minimalistic interior features a power moonroof, heated front seats, a 7-inch display for the climate controls and an 8.8-inch infotainment system with Apple CarPlay and Android Auto. The annoying part is that to operate the infotainment system you have to use the non-intuitive rotary dial on the center console. A 12-speaker Bose audio system is optional.

Now for what’s under the hood. The MX-30 is powered by a single 143-hp electric motor that sends the power to the front wheels. As you’d expect the electric motor doesn’t pack a big punch to get the 3,655 MX-30 moving down the road. Its acceleration is on par with other small crossovers, but if you’re wishing for a zippy electric car, the MX-30 is not it. The MX-30 is slower than the CX-30 and its top speed is only 91 mph. It also loses steam fast when you’re accelerating on to a highway.

While the electric motor could use a major power boost, the bigger issue with the MX-30 is its driving range. It features a small 35.5-kWh battery pack that only gives it 100 miles of range. This amount of range would be perfectly acceptable 10 years ago, but today we have electric cars that are traveling over 300 miles on a single charge. Mazda says that the MX-30 is aimed at commuters that don’t drive long distances each day and can charge the EV overnight. This may be ok for a few buyers, but range anxiety is one of the main reasons why buyers still haven’t made the jump into an EV. If you’re in the market for an electric vehicle, you’re definitely looking at its driving range and with the MX-30 it’s far too short.

The MX-30 is also not as efficient as some of its rivals with its 98 city and 85 highway MPGe ratings. The Chevy Bolt is rated at 131 MPGe in the city and 109 MPGe on the highway.

Recharging the MX-30 up to 80 percent using a Level 3 DC fast charger, will take 36 minutes. A Level 2 charger needs 2 hours and 50 minutes to reach the same charge level. Using a 120-volt outlet it will take over 13 hours to reach 80 percent. If you need to take a longer road trip, Mazda will give you 10 days of free loaner vehicles, but that also sounds like a hassle.

The MX-30’s powertrain may be a let down, but driving the MX-30 has that zoom zoom feeling that you expect from Mazda. It’s not fast, but the steering is quick and nicely weighted. The suspension is slightly firm, but also keeps things smooth. When you approach a corner, the MX-30 stays mostly planted to the road with just a little amount of body roll. The MX-30’s brakes are also a stand out with an overall feeling that’s more on par with traditional vehicles. There are also paddle shifters on the steering wheel to adjust the level of regenerative braking. We do wish that it offered one-pedal driving capability as well.

On the safety front, the MX-30 comes standard with adaptive cruise control, lean-keeping assist, rear parking sensors, a blind-spot monitor and automatic high beams. If you go for the Premium Plus Package you get a 360-degree camera, front parking sensors, a heated steering wheel, blind-spot assist, front-cross traffic alert and the Bose audio system.

The pricing for the 2022 Mazda MX-30 starts at $34,695, including destination fees. The Premium Plus version starts at $38,200. The good news is that the MX-30 is eligible for federal and state incentives.

At the end of the day, the 2022 Mazda MX-30 is a niche electric vehicle. Mazda only plans to sell 560 units in its first year and all of those will be sold in California. If you live in an urban city, like San Francisco where you don’t have to drive very far, the MX-30 is perfect for you. Next up, Mazda will introduce a plug-in hybrid version with a rotary range extender, which will give it a longer driving range.