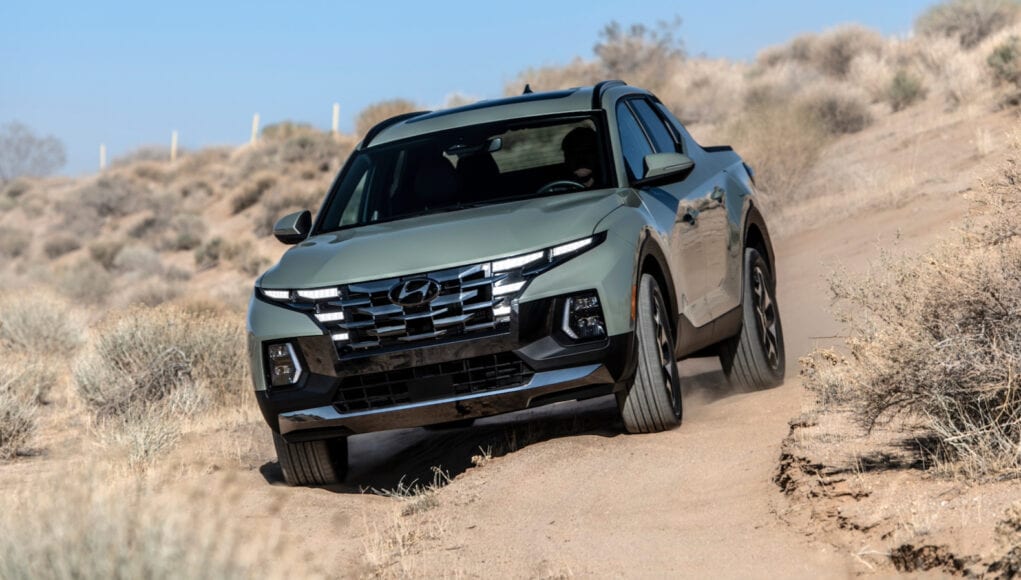 Hyundai has officially unveiled its first pickup, the Santa Cruz. Instead of calling it a “truck” Hyundai prefers to call it a “Sport Adventure Vehicle.” While it does look like a truck, it is closely related to the 2022 Tucson, which means its not a traditional body-on-frame truck.

Instead of being a hardcore truck, the Santa Cruz is a bit softer, like the Honda Ridgeline and upcoming Ford Maverick, which are all based on unibody platforms. On the outside it’s clear to see the connection between the Santa Cruz and Tucson. It’s face is similar to the Tucson and we like the overall aggressive look of the Santa Cruz.

The Santa Cruz rides on a 118.3-inch wheelbase, which is 9.8-inches longer than the Tucson. It’s also longer than its SUV brother with its length stretched by 12.4-inches to 195.7-inches long. The bed length stretches to a max 52.1 inches, which is shorter than you’ll get in the Honda Ridgeline or Toyota Tacoma. Just like the Ridgeline, the Santa Cruz has a lockable storage area in the bed.

Inside the Santa Cruz looks similar to the Tucson, which is expected. The digital gauge cluster and infotainment system are identical. The only big difference you’ll notice from the driver’s seat is the traditional shift lever, instead of the push-button transmission selector in the Tucson.

The 2022 Hyundai Tucson is scheduled to arrive this summer.