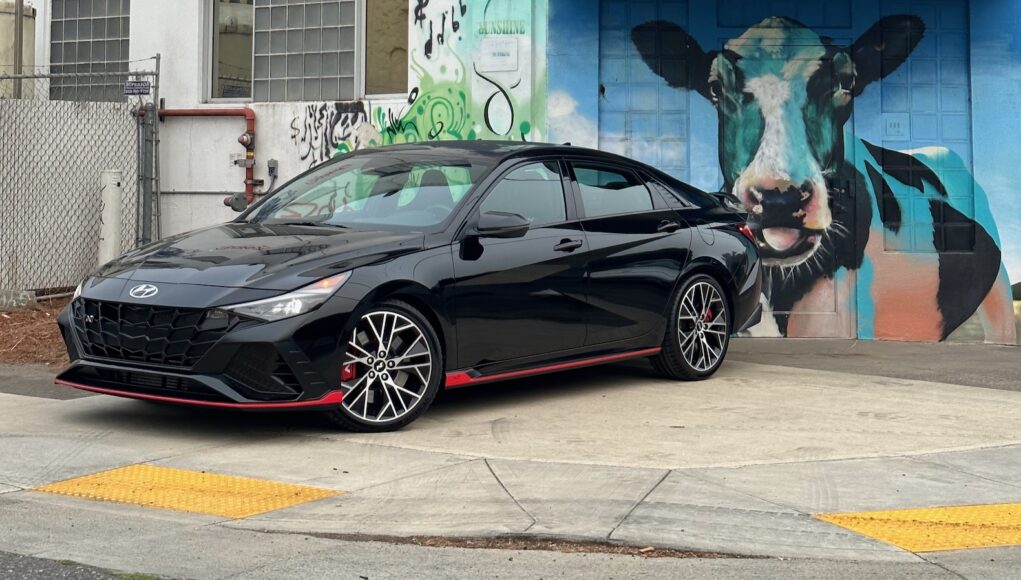 The 2022 Hyundai Elantra excites us with its styling, leading gas mileage, and N Performance. The Elantra compact four-door casts a long styling shadow over rivals like the Toyota Corolla and Mazda 3. It’s brash on the outside, advanced on the  inside, but has a welter of powertrain choices that include a fun Hybrid with stellar EPA ratings and an N model that transforms it into more than a curve loving commuter car. For 2022, it’s a carryover, save for the high-output Elantra N that shares mechanicals with the Veloster N.

Hyundai’s pivoted sharply with the last three Elantra’s, from snooze to sizzle. This one’s a feast for the retinas, with its jet-fighter stance and heavily creased body panels. The body of the Elantra has the carved and chamfered look of a styling mock-up, before it’s smoothed over for mass consumption. It’s technically difficult to manufacture, what with all the diamond-shaped folds around the waist. Its angled wasp waist fades into a fastback roofline that’s stubbed to the rear end with stick-pin taillights. It’s enough to make Honda’s recent Civic swoon with envy.

Super-miser Hybrids suit us best, but the Elantra N outperforms. Under its radical skin, the Elantra offers four distinct power choices. The Hybrid’s our hyper-miler favorite, and the Elantra N excites. Base cars do fine commuter detail and the Elantra N promises ripe performance for a sliver of sedan buyers.

On the upside, the Elantra can be entertaining to drive. This Elantra has notably better handling than prior versions, with crisp steering feel undercut by some wandering on the highway. It isn’t made of exotic stuff, with its front strut and rear torsion-beam suspension, but it’s damped well for that kind of low-key driving, and its brake pedal tuning adds to the dutiful air.

The Elantra N realizes the promise of the N Line and justifies its punky styling. Sharing an engine with the Veloster N, the Elantra N has a 2.0-liter turbo-4 churning 276 hp and 289 lb-ft to the front wheels. A 6-speed manual comes standard with a mostly linear clutch pedal, and throws that lean a bit longer than some other manuals. An 8-speed dual-clutch automatic does it better, and helps the Elantra N hit 60 mph in 5.0 seconds. The rev matching button on the steering wheel of the manual becomes a boost button labeled NGS (N grin shift) that boosts output by 10 hp for 20 seconds. It’s a fun gimmick, and the DCT could win over some stick enthusiasts.

Larger and slightly heavier than the Veloster N and the Elantra N Line, the Elantra N adds a cross brace behind the rear seats for more stiffness. Three damping settings reduce the squish on the front when braking hard before a turn, but body roll and understeer are present in the front-drive compact. Mitigating this, an electronic limited-slip rear differential sends power to the outside wheel and Hyundai equips the Elantra N with Pro Pilot Sport 4S summer performance tires as standard. The Elantra N with the manual outperforms the DCT when it comes to efficiency, which is unusual with modern manuals. The EPA rates it at 22/31/25 mpg, whereas the 8-speed automatic pulls up the rear at 20/30/23 mpg.

The Elantra protects itself and passengers well in crashes. All Elantra’s have automatic emergency braking, automatic high beams, and active lane control. Adaptive cruise control and blind-spot monitors can be fitted to most models. The NHTSA gives the Elantra five stars overall, with a four-star rating for front-impact protection and five stars for rollover resistance. The IIHS awards it a Top Safety Pick, but only on the Limited version, which gets “Good” headlights; others with “Poor” headlights don’t earn the nod.

The cockpit’s enough to send it back for a rework. The steering wheel even looks like it’s sighing at the wave of black plastic that wraps around its controls. Duller and less avant-garde, the Elantra sets its front seats in detached cells split by a divider, somewhat walled off for a drive-centric cockpit. The avant-garde trim also flanks a big touchscreen, and the dash gets capped with thin bands of air vents.

Hyundai stretched the latest Elantra by a couple of inches in length and by about an inch in width, then lowered its seating position. It sounds great and interior space is swell. The Elantra’s interior space rivals Hyundai’s own mid-size Sonata. Our 6-foot staffers fit easily in its low-set front seats, which still offer good head room though it’s about an inch closer to the ground than before. In back, with about 38 inches of leg room, the Elantra can house long-legged passengers well enough, but head room suffers due to the low and sloping roof. With the rear seatbacks folded down, the Elantra extends its 14.2 cubic feet of trunk space.

The Elantra goes overboard on value. With its excellent warranty, value, infotainment, and standard and optional features, the Elantra sets the bar for compact cars. With a starting price of $32,925, the Elantra N with a 6-speed manual transmission might seem too expensive for an Elantra, but it’s well worth it. Standard features include 19-inch wheels, heated illuminated-N sport bucket seats, electronically controlled suspension and differential, exhaust valve system, performance gauges, digital key, push-button start, and an 8.0-inch touchscreen with wireless Android Auto and Apple CarPlay.

Hyundai’s Elantra styling is sweeping, changing it from an anonymous commuter into something distinct, inside and out. Built from complex origami folds, the Elantra is a brilliant exercise in distinct but fresh styling helping the Elantra to punch way above its pay grade. With cutting edge technology, great value, and an efficient powertrain; the 2022 Hyundai Elantra N challenges being silent and puts an unexpected smile on your face. 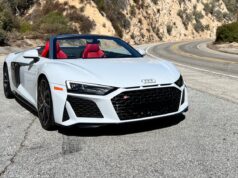