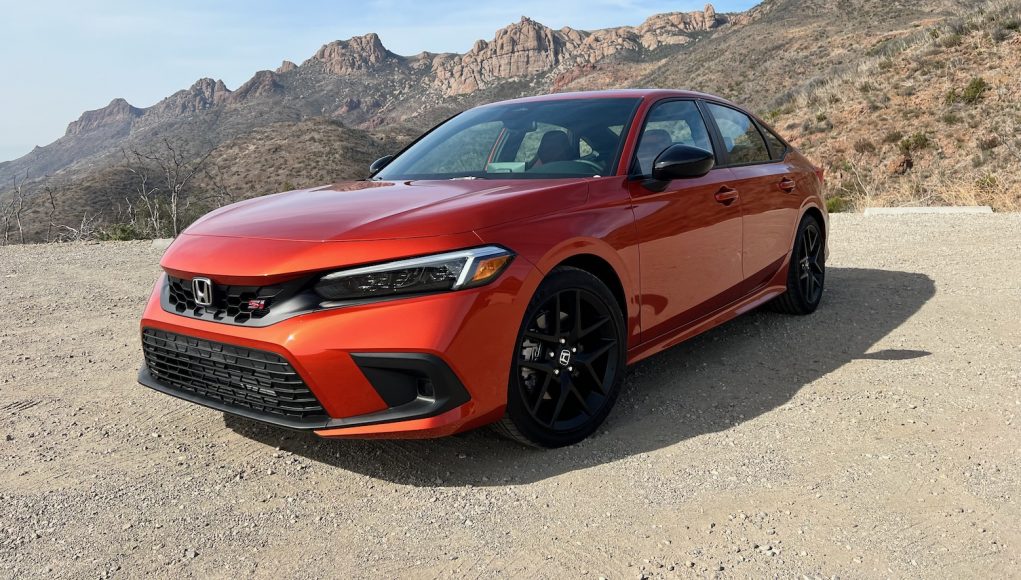 The 2022 Honda Civic Si is here and just like the standard sedan, it now looks more grown up and refined. When Honda unveiled the new Civic Si, some were disappointed that it has less horsepower than the last one, but power complaints aside, the new Civic Si is an improvement over its predecessor.

Starting with the engine, the 2022 Civic Si is powered by the same 1.5-liter four-cylinder as the last one, but it’s now down 5 horsepower. The engine now generates 200 hp and the same 192 pound-feet of torque as before. The good news is that peak torque now arrives at 1,800 rpm, which boosts the amount of power at the low end, making it feel more responsive. Compared to the 2020 Si, the loss in horsepower isn’t even noticeable and instead thanks to the better torque curve, the new Si feels more powerful.

Just like every Civic Si before it, the new Si is only available with a manual transmission. In this case, the engine is mated to a six-speed manual transmission, which gets a new lighter flywheel. The 2022 Si also gets the rev-matching feature from the Civic Type R, which means that when it’s engaged, the engine will give a little boost to the throttle when downshifting to provide perfect gear changes. The rev-matching system can be turned off via the touchscreen, but we wish Honda instead employed a simple button on the console to turn on the rev-matching. A limited-slip differential is also standard.

The drive mode selector now has Normal and Sport modes, plus a new customizable Individual mode. The new Individual mode lets you combine the improved throttle response from the Sport mode with the lighter steering from the Normal mode or the opposite.

The Civic Si is rated at 27 mpg city, 37 mpg highway and 31 mpg combined, which is 1 mpg better across the board than the last Si.

On the outside the new Si has toned down styling that is less polarizing than the previous version. At the rear there’s a unique dual exhaust system with a nice coiled design that you can see if you get down on your hands and knees. The new exhaust improves the engine’s sound. There’s also a black lip spoiler and at the front it looks a little sportier than the standard sedan, thanks to the same honeycomb grille that you get with the Civic hatchback. The styling is topped off with black 18-inch alloy wheels.

Under the skin, Honda made some big changes to the Si’s chassis and suspension to make it more fun to drive. The former two-mode active dampers are gone, which is a disappointment, but the new suspension does a great job of finding the perfect balance between comfort and sport. The suspension also gets stiffer springs and stabilizer bars, plus some parts handed down from the Civic Type R. The new Si’s steering has also been improved with more feedback and weight, which makes it great when you’re carving up a windy road, but also not too heavy for everyday driving.

To keep you in check, the Si has big 12.3-inch brake rotors at the front and 11.1-inch rotors at the rear. After spending some time in the mountains with the Si, we were impressed that the brakes remained up for the task the whole time.

Inside the new Si gets red trim and unique cloth front seats that have improved bolstering to keep you in the seat on those twisty back country roads. The interior does borrow some parts from the Civic Touring model, like its 9-inch touchscreen with wireless Apple CarPlay and Android Auto. It also comes standard with a 12-speaker Bose audio system. In front of the driver there’s a 7-inch digital instrument cluster next to an analog speedometer. The only thing we wish it had would be a wireless charger, so you can really leave the wires at home.

The 2022 Civic Si is a nice improvement over its predecessor, but that does come at a cost. The new Si starts at $28,315, including destination. That makes it $2,320 more than the 2022 Civic Si. The Civic Si also doesn’t come with any options other than summer tires, which add $200 to the price.

Although its higher starting price may be a concern for some, the new Civic Si is an improvement over its predecessor. The tweaks to the engine make it more lively around town and its sharpened handling makes it more fun to drive. Yup we can easily say this is the most fun Civic Si yet.