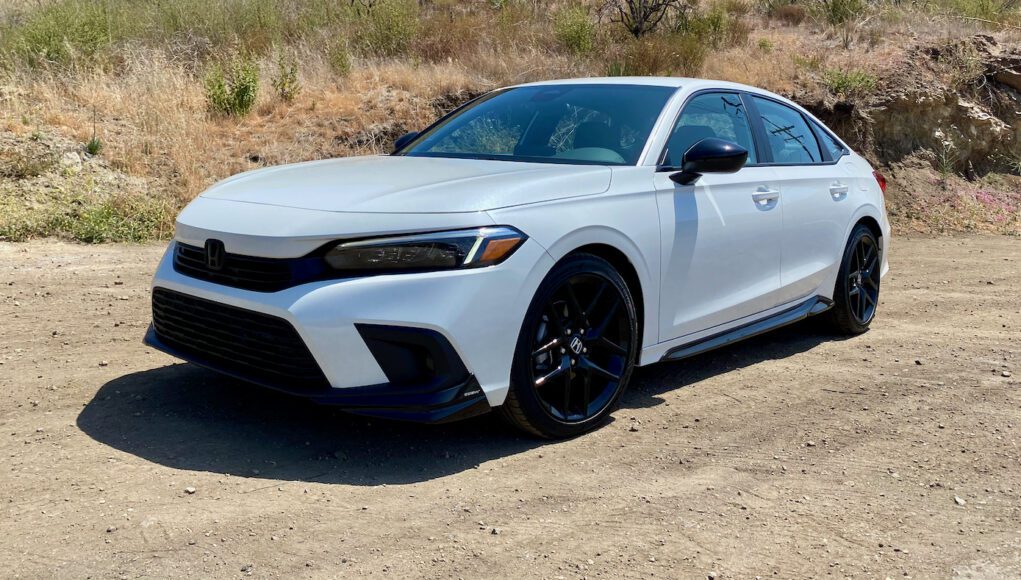 The 10th generation Honda Civic was a huge success for Honda with its great driving dynamics, spacious interior and efficient powertrains. Now we have the 11th generation 2022 Civic, which tries to build on its predecessor, but with one big change – it now has a less polarizing exterior.

We often heard labels like “boy racer” when people described the 10th generation Civic. It stood out in the often forgettable compact sedan segment, but not everyone was sold on it. Now the Civic looks more refined and in many ways you can call it a mini Accord. The fake vents and hard cut lines have been removed an in its place there’s a cleaner look that makes the Civic look more grown up.

While the exterior is far more conservative than its predecessor, it also now looks more upscale. We especially like the fact that Honda pulled the A-pillars back by about 2 inches to give it a longer hood. For those that still want a more aggressive exterior, you’ll want to wait for the upcoming Civic Si and Type R models.

It’s not just the exterior that looks more upscale, inside the new Civic has a much improved interior that feels more premium than before. It comes standard with a 7-inch touchscreen, which is enlarged to a 9-inch system on the Touring trim level. The new interface for the infotainment system is a huge improvement with better graphics and if you go with the Touring you get wireless Apple CarPlay and Android Auto.

In front of the driver there’s also either a partial or fully digital instrument cluster. New design details include the hidden air vents that sit behind a honeycomb mesh pattern and the center console is covered in a new textured material that hides finger prints and smudges better than the piano-black trim that everyone is using today.

The Civic also gets a new Bose audio system for the first time and a wireless charging pad. Sadly both of those features are reserved for the Touring model.

Thanks to a 1.4-inch longer wheelbase, the interior of the new Civic now has a bit more space, especially in the back seat. The front seats have also been widened a bit to make them a better fit for bigger people.

Under the hood the same two four-cylinder engines return. The LX and Sport models are powered by a 2.0-liter four-cylinder with 158 horsepower, that’s mated to a CVT. The 1.5-liter turbocharged engine is standard on the EX and Touring trim levels. It has an extra 6 hp and 15 more lb-ft. than before, for a total of 180 hp and 177 pound-feet.

Honda also made some updates to the CVT. Sadly a manual transmission isn’t offered here, so you’ll have to wait for the Si and Type R if you want to shift your own gears.

We drove both the Civic Sport and Civic Touring back to back. The 2.0-liter four-cylinder packs a decent punch around town and is a bit more engaging to drive than its biggest rival, the Toyota Corolla. The turbocharged engine is the better choice if you want a more sporty driving experience. The 1.5-liter picks up speed fast and the new Sport mode adds a bit of fun. The Sport mode is only available on the Sport and Touring trim levels and it only adjusts the acceleration and transmission settings.

Honda also updated the suspension and steering. The new Civic now feels more composed on the road with more steering feedback than before.

On the safety front, the Civic comes standard with automatic emergency braking, lane-departure warning with lane-keep assist and adaptive cruise control. The adaptive cruise control also now has an updated system with a wider camera view to helps it follow traffic and keep you in your lane better than before. The system can also bring you to a complete stop.

Now we just have to hold tight to see the new Civic hatchback, which is going to debut next week. It will then be followed by the new Si and Type R models.