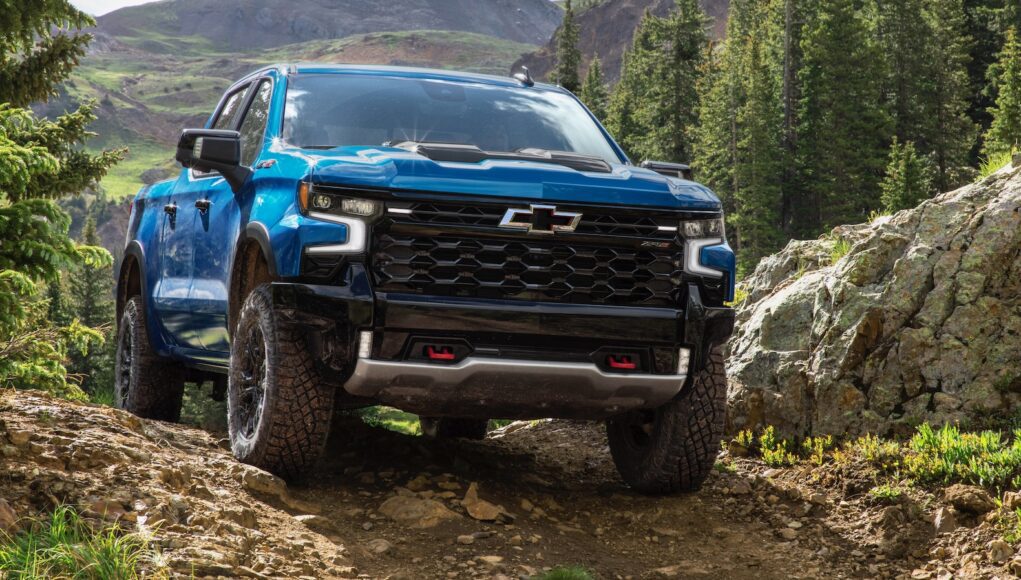 Chevy has given the 2022 Silverado a big update, which includes an updated interior, the introduction of the ZR2 model and more power from the available four-cylinder.

The 2022 Silverado ZR2, which gets a two inch suspension lift with Multimatic DSSV spool-valve shocks and springs. Chevy says that the ZR2 has more suspension travel than the Trail Boss. The ZR2 also gets 33-inch off-road tires, front and rear locking differentials, and skid plates. It also gets a unique steel front bumper that improves the approach angle. The Silverado ZR2 is only available in the crew cab with the short bed. It’s powered by a 6.2-liter V8 with 420 horsepower and 460 pound-feet of torque, that’s mated to a ten-speed automatic transmission.

The biggest update is on the inside where the interior has been revamped. Starting with the LT trim level there are new screens and better knobs and buttons that make it look more modern. In front of the driver there’s 12.3-inch digital gauge cluster and the 13.4-inch infotainment screen is a welcome addition. A console-mounted electronic shifter has been added to five passenger models, while six-passenger models keep the column shifter.

On the outside every trim level gets a new front fascia and grille design that lowers the headlights. On LT models and above, the wing-shaped daytime running lamps have been revised and feature animated lighting sequences when approaching, starting or walking away from the vehicle.

Under the hood the 2.7-liter four-cylinder now generates 420 pound-feet of torque thanks to a more rigid cylinder block casting and 30 percent stiffer crankshaft. It’s eight-speed automatic has also been tweaked to provide smoother shifts and quicker downshifts.

The diesel-powered Silverado is now available with a Max Tow package that it can now tow up to 13,300 pounds, which is a big improvement from 9,500 pounds on the previous version.

The 2022 Chevy Silverado will arrive next spring.