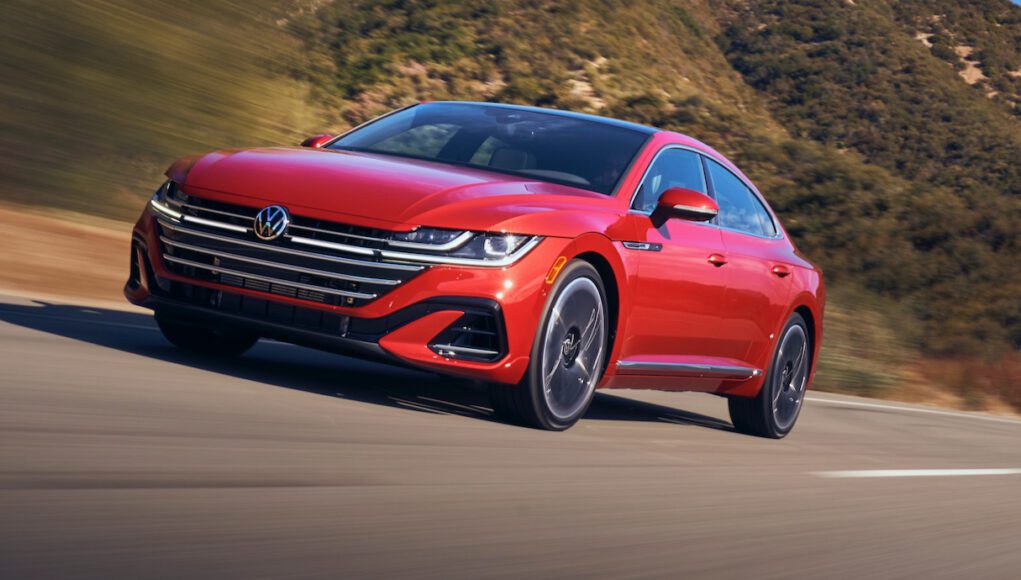 The stylish Volkswagen Arteon entered VW’s lineup for the 2019 model year, but sadly it is one of the slowest selling vehicles in the brand’s lineup. VW only sold 1,099 units in Q1 of this year, compared to 4,535 Passat sedans and 22,714 Jettas. Does the Arteon deserve to be over looked? Definitely not.

To hopefully improve the Arteon’s sales, VW has given the 2021 Arteon a nice facelift to make it even more attractive. We already loved the Arteon’s sleek profile and its hatchback shape, which helps it stand out from other big sedans. For the 2021 model year the face looks more aggressive with new air intakes, a new grille and redesigned headlights. The new grille is also illuminated.

From the side there’s a new character line that VW says pushes “the body’s volume downward to the ground, giving it a dynamic appearance.” The exterior is finished off with new alloy wheels.

Inside there’s a redesigned dashboard and a new steering wheel. There are new air vents on the dashboard and 30 ambient lighting colors to make the interior serene. You’ll also notice that the climate control system is now digital without the old school knobs. The 2021 Arteon comes standard with a 10.25-inch Digital Cockpit and an 8-inch touchscreen infotainment system. Wireless Apple CarPlay and Android Auto have also been added.

Overall the interior updates make the Arteon feel even more luxurious than before. It looks and feels many steps above the Jetta and Passat with an almost Audi-like feel. We like the supportive front seats, which are heated and cooled on upper trim levels. While rear seat passengers get to stretch their legs out with a lot of legroom. When you need to haul some gear, you can fold the rear seats down, which gives you 56.2 cubic feet of cargo space. Look at that, the Arteon is not only stylish, but it’s also versatile.

Under the hood there’s only one engine to choose from, a 2.0-liter turbocharged four-cylinder with 268 horsepower and 258 pound-feet of torque, that’s mated to an 8-speed automatic transmission. The base Arteon SE sends its powers to the front wheels, while 4Motion all-wheel drive is optional on the SEL and SEL Premium models.

We wouldn’t exactly call the Arteon fast, but it’s turbocharged engine does have enough power to get the Arteon moving down the road with ease. It would be nice if VW offered a version with more power, but for most buyers it’s not needed. The available torque arrives early making the Arteon a comfortable cruiser. There’s a Sport mode for when you want to liven things up a bit, since it tweaks the steering, throttle and transmission settings.

The Arteon also excels on the road with its composed ride, that’s also a little fun when the road turns a bit twisty.

The 2021 VW Arteon starts at $38,190 and it comes standard with a blind spot monitor, automatic emergency braking, rain-sensing wipers and LED headlights. The top spec SEL Premium R-Line will set you back $48,190.

So there you have it, we love the VW Arteon and we wish more buyers would give it the attention that it deserves. But why is it not selling? Well besides the obvious crossover argument, the Arteon also competes against entry-level luxury sedans, like the Acura TLX. Even the Kia Stinger is a rival, which is more fun to drive than the Arteon.

VW has already confirmed that the Passat will soon disappear from its US lineup, but we hope the Arteon doesn’t have the same fate.