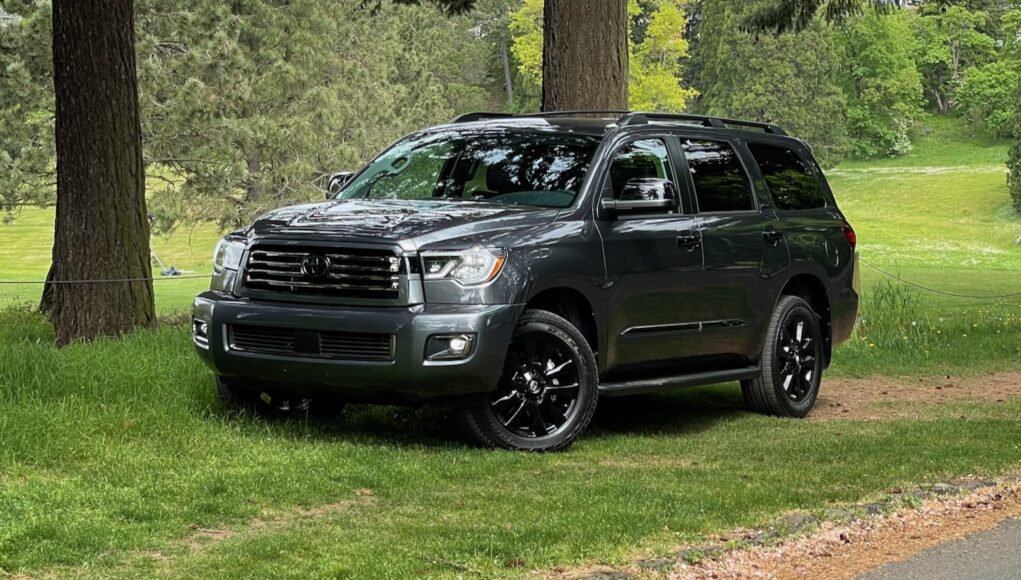 Toyota developed a good, sturdy full-size SUV for the 2008 model year. Based on the body-on-frame platform from the Tundra pickup, the Sequoia got that truck’s robust structure and driveline components, including its muscular 5.7-liter V-8. But that’s about as much engineering as Toyota has put into the Sequoia since, only updating the interior and falling behind there, too.

I recently spent a week with a 2021 Sequoia Nightshade Special Edition, lugging heavy stuff, heading to the grocery store, and generally treating it like any suburbanite would. It was a trip through the past, and it showed me where this aging truck hits and misses.

The Sequoia’s 5.7-liter V-8 churns out the same 381 hp and 401 lb-ft. of torque that it made 13 years ago. It starts up with a growl accompanied by a sound akin to an oven’s overhead fan working away under the dash. It’s hooked to an antiquated 5-speed automatic transmission, but it pulls hard from a stop and contributes to a competitive 7,400-lb towing capacity. It’s a good engine that’s still competitive in terms of power.

With four-wheel drive, the Sequoia is rated at 13 mpg city, 17 highway, 14 combined. At a Toyota Tundra event in 2014, a company rep told me, “Whether you have a V-6 that’s working hard or a V-8 that’s hardly working, you’re going to get 15 mpg,” using it as an excuse not to pursue more efficient pickups. That attitude extends to the Sequoia and through time to today. Ford and GM have electric trucks coming, let alone more efficient engines, diesels, and other efforts to improve efficiency. And Ford offers an F-150 Hybrid.

The Sequoia is appropriately brawny, with high, broad shoulders and an overall imposing presence. The Nightshade Edition makes it look better, with blackout trim, black 20-inch wheels, and a dark chrome grille. The design may be from 13 years ago, but it still looks contemporary in the land of the giant SUVs.

The vestiges of Toyota’s Entune infotainment system are alive with a 7.0-inch touchscreen, which is tiny by today’s standards, especially on the vast expanse of this big truck’s dash. The system was updated in 2020 to use the latest processor and add Apple CarPlay and Android Auto, plus Toyota’s Remote Connect app that allows remote starting and vehicle status alerts, among other features. Competitors have at least 8.0-inch screens, and that makes Toyota’s system feel like using a five-year-old cell phone.

The 2021 Toyota Sequoia three-row SUV starts at $51,465, up $160 from 2020 despite offering the same equipment. Standard convenience features include a 7.0-inch touchscreen, Apple CarPlay and Android Auto and Amazon Alexa compatibility, two USB charge ports, power sunroof, LED headlights, roof rails, running boards, 18-inch wheels, and cloth seats. Top Limited and Platinum trims increase by $170. The price includes a $1,365 destination fee, up $40 from 2020. At the other end of the range, the 2021 Toyota Sequoia in Platinum trim with four-wheel drive and seven seats costs $70,740.