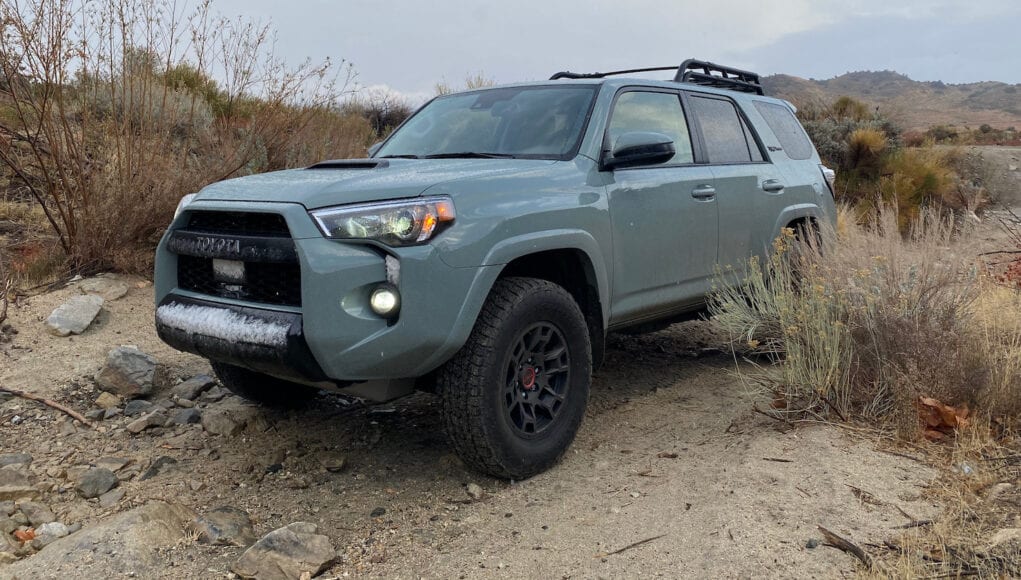 The Toyota 4Runner is one of our all time favorite SUVs thanks to its rugged appeal and off-road capabilities. Although the current generation 4Runner has been around since 2011, Toyota still manages to still sell a lot of them. In 2020, Toyota sold 129k 4Runner models, which makes it more popular than some other Toyota models, like the C-HR, Tundra and Prius.

Thanks to its tough body-on-frame platform the 4Runner can tackle nearly everything that you can throw at it when the road ends. There are a few compromises though, since the 4Runner is built more like a truck, its on road performance isn’t as strong as a crossover, like the Toyota Highlander. It also loves to drink fuel and its list of tech features is a bit short, but either way the 4Runner is a great alternative to the Jeep Wrangler and even the new Ford Bronco.

The 4Runner is offered in several trim levels to appeal to a large lot of buyers, from the base SE, to the luxurious Limited and the off-road hungry TRD Pro. Our TRD Pro tester is aimed at adventurous buyers that love spending their weekends in the dirt.

The 4Runner TRD Pro has the same 9.6 inches of ground clearance as the rest of the lineup, but it gets special 2.5-inch Fox Internal Bypass shocks and TRD front springs. It also gets a large front skid plate, and black alloy wheels that are wrapped in Nitto Terra Grappler tires.

The TRD Pro comes standard with four-wheel drive, although other trim levels can be equipped with only rear-wheel drive. To help you traverse the trails, the TRD Pro also gets an electronically locking rear differential, special crawl control feature and hill start assist control. As you can see, the 4Runner TRD Pro is a true rock crawler, unlike the softer crossovers that are dominating the SUV segment.

When it comes to fuel economy, this is not where the 4Runner shines, since it’s rated at 16 mpg in the city, 19 mpg highway and 17 mpg combined. The V6-powered four-door Wrangler is more fuel efficient at 19/24/21 mpg.

Although the 4Runner’s powertrain is showing its age, it’s more than capable. The V6 emits a nice growl and can easily keep up with its more modern competitors. The 4Runner can also tow 5,000 pounds, which beats the Jeep Wrangler.

We took the 4Runner TRD Pro for an off-road adventure in the snow and it never faltered. It climbed over the rocks and hills with ease. It’s a beast that just begs for more and we love it.

Now on the once you’re back on the road, the 4Runner is loud and its handling is definitely more sloppy than you’ll get with a softer midsize crossover, like the Honda Pilot.

Inside the 4Runner’s interior doesn’t really stand out, but it is functional. The switchgear looks dated and there are lots of hard plastic materials throughout the cabin. But either way, everything you need is placed where you expect it to be and the interior can comfortably fit your friends. The high floor does make mean you have to literally jump into the 4Runner and loading heavy cargo can be a bit cumbersome.

On the tech front, the 4Runner features an 8.0-inch touchscreen infotainment system with Apple CarPlay and Android Auto. The Entune system is functional, but it also looks a bit dated. And for the driver assistance tech features, the 4Runner does have automatic emergency braking, adaptive cruise control and lane departure warning, but a blind-spot monitor is missing.

At the end of the day there are plenty of new ruggedly styled crossovers to appeal to buyers that want to look like they are ready for an adventure. But if you want an SUV that can actually tackle rocks, sand trails and mud, the 4Runner needs to be at the top of your list.