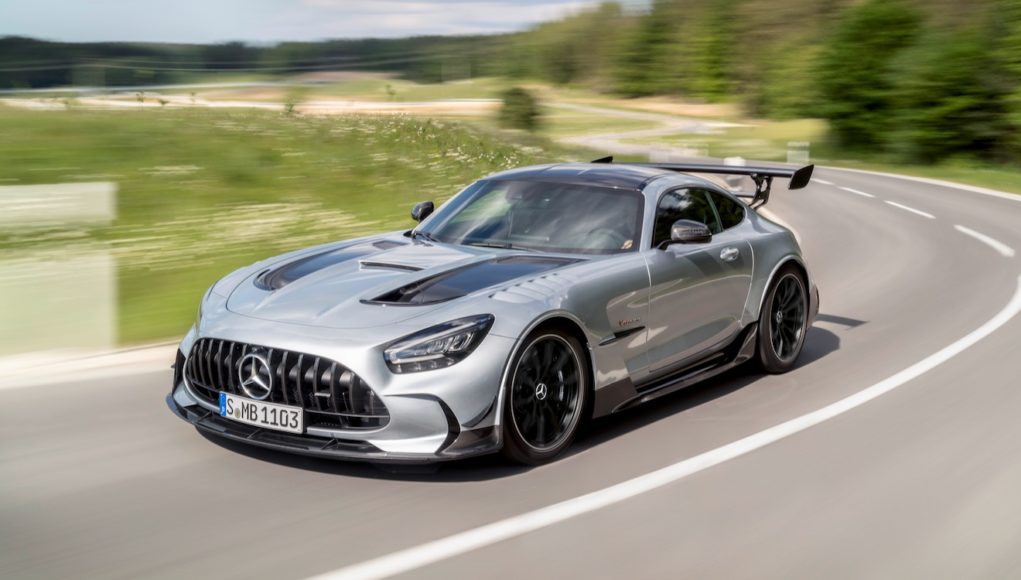 Under the hood the 2021 Mercedes-AMG GT Black Series is powered by the 4.0-liter twin-turbocharged V8, but it gets several upgrades like a flat-plane crankshaft to improve low end torque. The exhaust piping has also been moved between the cylinder banks and the turbochargers’ compressor wheels are now larger, while boost pressure is now at 24.6 psi, compared to 19.6 in the GT R Pro. The V8 is also mated to an upgraded 7-speed dual-clutch transmission.

To help the GT Black Series get around the track even faster, there are several new aero add ons, like a manually adjustable splitter and dive planes at the front. At the rear there’s a massive tiered, two-stage wing and a quad exhaust system pokes out of a rear diffuser. There’s also a new carbon fiber hood with large vents to cool down the engine and add downforce.

The suspension has also been upgraded with wider front and rear tracks, new coil-overs with adjustable damping, spherical bearings on the lower wishbones and increased camber and toe-in stability. At the front a carbon fiber sway bar has been added, while a carbon fiber shear panel has been added to the rear underbody.

It rides on 19-inch wheels at the front and 20-inch wheels at the rear that are wrapped in Michelin Pilot Sport Cup 2 R tires. There’s also a new traction control system with nine levels that you can choose from. It’s operated via a knob on the center console and allows preselection of one of nine slip settings on the live rear axle.

Mercedes-Benz has not announced the pricing for the 2021 Mercedes-AMG GT Black Series.