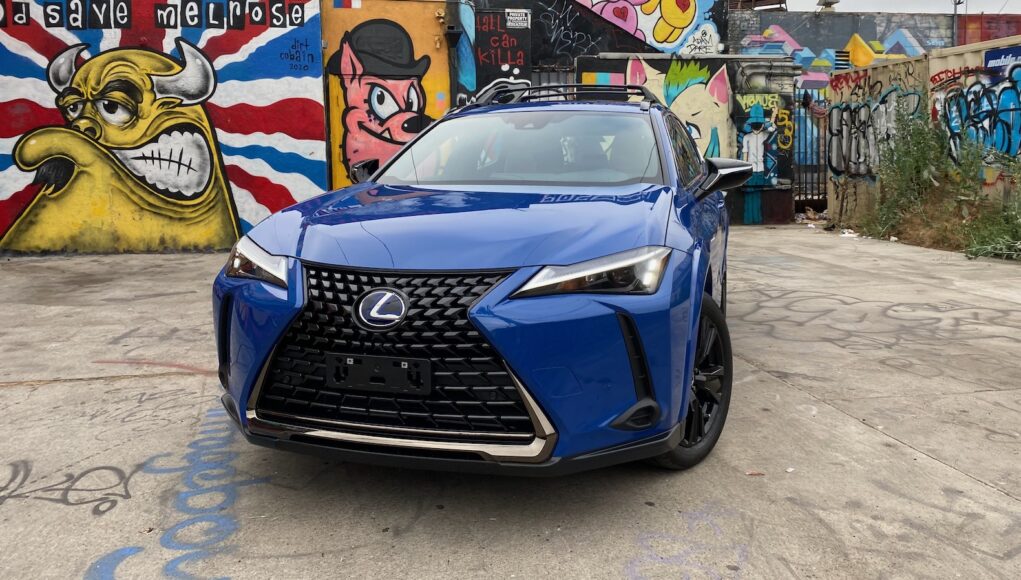 The Lexus lineup includes several crossovers, including the popular RX, the NX and the small UX. At the small end of the lineup, the UX is a compact crossover that competes with the BMW X1, Audi Q3 and Mercedes-Benz CLA. The UX is offered with two powertrains, a 2.0-liter four-cylinder and a hybrid, which means that the UX is the only hybrid in its segment.

The UX originally debuted in 2019, so the only big updates to the 2021 UX include a blind-spot monitor, rear-cross traffic alert and a new cargo board that increases the cargo capacity to 22 cubic feet.

Although it’s been out for a few years, the UX still looks fresh with its aggressive lines and creases, big spindle grille and full width rear light bar. Compared to its larger siblings, the UX looks the most like a raised small hatchback, which kinda makes sense, since it took over for the CT hatchback in the lineup.

Around town the UX 250h has adequate power for zipping around the city streets. But if you push it hard and the powertrain gets a bit noisier than we’d expect from a Lexus. Plus the powertrain runs out of steam fast, so accelerating on a highway on ramp can be a bit slow. The UX 250h’s suspension does a good job of keeping body roll in check, making it feel a bit agile. The Sport mode does amp things up a little, but we do wish that Lexus offered a sportier powertrain in the UX.

Inside the UX has a top notch interior with high quality materials and a dose of style that you might not expect at this price. The UX borrows many of its parts from other models in the lineup, which elevates the interior. But there are a few misses, mainly the infotainment system. Lexus has been updating its models with a touchscreen infotainment system, but the UX still has the old system that makes you use a touchpad to operate it. It’s clunky, slow and dated looking. The good news is that Lexus has already unveiled its latest system in the new NX and it’s quite good.

The UX will easily fit four passengers, but fitting a fifth will make it a tight squeeze. Legroom in the rear isn’t plentiful and the UX’s high belt line makes the interior feel snug. Cargo space also isn’t very big, since the UX 250h only has 21.7 cubic feet of space with the rear seats up and the UX 200 only has 17.1 cubic feet. That space is adequate for a quick trip to the grocery store, but being able to pack enough stuff for a weekend road trip, will be an issue.

Given its small footprint and snug interior, we see the UX mainly appealing to young buyers that live in a city. Families will want to step up to the larger NX or RX models.

At the end of the day the UX is a stylish compact crossover and the UX 250h gets impressive fuel economy specs. We do wish it had a bit more power and that the interior had a bit more room, but for young couples the UX is the perfect companion.