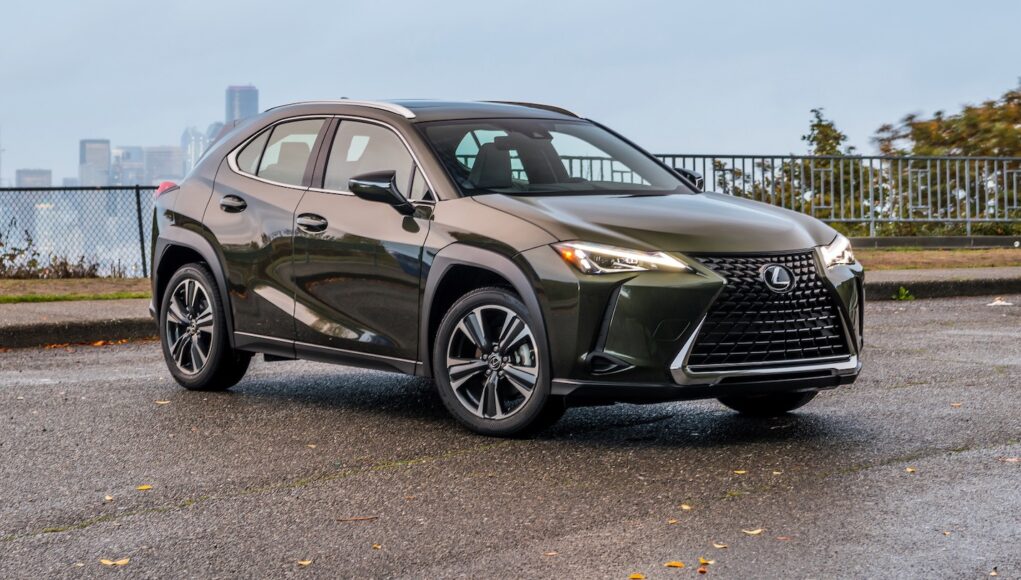 The 2021 Lexus UX taps design verve to hawk its cozy interior space and its middling performance. The Lexus UX is a five-seat crossover SUV that’s on the small end of its competitive class, but offers a hybrid option that dramatically boosts its gas mileage. Its rivals include the Audi Q3, BMW X1, and Mercedes-Benz GLA.

Blind-spot monitors are standard across the lineup for 2021. Lexus offers base, Premium, and F Sport trims. All wear a crisply folded and wedgy shape that bears almost none of the hallmarks of Lexus cars from just a decade ago. This one’s blunt, hard-edged, dramatically detailed, and endowed with a big hourglass grille. It’s more muted inside where a big display screen caps the dash and piano-style controls, surrounded by high-grade materials.

Adventurous looks mark the UX, from the latest take on the hourglass grille found across the Lexus lineup now, through the LED headlights that streak like lightning across the front end. Deep creases act like ripped abs on the UX’s flanks. The abrupt, short hatchback body gets capped with red-finned lighting in back that ties together the look.

Inside the UX calms down and dons more traditional apparel. It still wears a lot of lines and a lot of buttons and switches, but the visual sweep is gentle and looks suitably rich. A 7.0-inch display factors into the gauge cluster, unless it’s a UX F Sport, which gets an 8.0-inch screen. Drivers tap piano-style keys beneath the widescreen infotainment display; with navigation, it’s 10.3 inches on the diagonal, and takes up a lot of dash-top real estate.

The UX 200 taps a 169-horsepower inline-4 and a continuously variable automatic transmission (CVT) for its drivetrain, while the UX 250h adopts a different inline-4 with a battery pack and with electric motors on each axle for slightly more power, slightly stronger acceleration, and great fuel economy upwards of 40 mpg. Handling’s fine, but the ride quality can be brittle when shod with F Sport wheels and tires and a tauter suspension tune.

Crash-test scores put the Lexus UX at the top of its class, and automatic emergency braking is standard, along with power features, synthetic leather upholstery, and an infotainment system that isn’t touchscreen-enabled. Instead, a touchpad serves as the input device with redundant voice and steering-wheel controls; it’s a kludgy setup that we’d swap out for a touch-friendly screen any day.

Three inches shorter than the original Lexus RX from the 1990s, the Lexus UX has good front seats that get more snug and supportive in F Sport trim. The back seat’s more narrow and confining, and cargo space, while not as deep and square as you’ll find in most other small crossovers, is decent once rear seats have been folded down and out of the way. Prices start at $33,925 for the UX200, which comes with power features, synthetic leather upholstery, and touchscreen infotainment with Apple CarPlay and Android Auto compatibility.

For those looking for a luxury urban crossover the 2021 Lexus UX is an admirable choice. It drives like a proper Lexus, keeping the outside world at bay, is easy on the eyes and senses with its avant-garde styling, all while delivering a fuel saving safe and reliable ride. The hybrid powertrain is definitely the one to chose. In the end the UX is truly a Lexus and deserves a look.