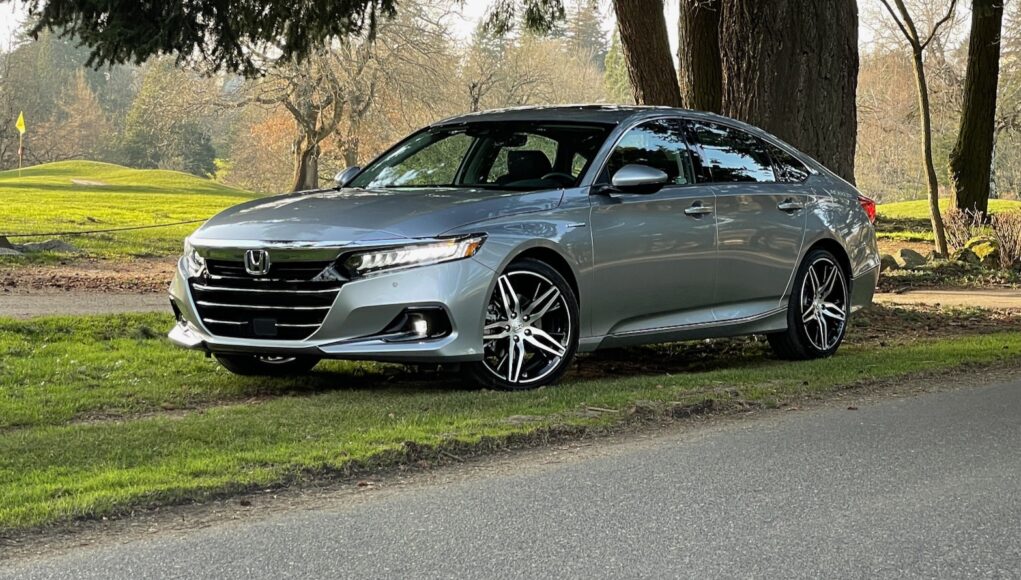 One of America’s best-selling cars for decades, the Honda Accord, is not particularly exciting, but it fits in with a lot of things and it’s pretty much everywhere you turn. But the 2021 Accord Hybrid, which arrives with powertrain updates and some new technology, doesn’t feel like your typical Accord from behind the wheel. It’s much more refined with more than a whiff of some upscale German rivals, think of a polished C-suite executive.

On the spec sheet, not much seems to have changed for the Accord Hybrid. It’s the same two-mode hybrid system which relegates the gas engine to be used as a generator much of the time, only clutching into the power flow at cruising speeds. Power output also remains the same, a combined 212 horsepower and 232 pounds-feet of torque. What is different for this year is how that power is delivered. Honda says that all changes made to the powertrain come from tuning and software updates to improve drivability.

This is very similar to the system that we tested in the CR-V Hybrid earlier this year and my experience in the Accord Hybrid was (predictably) pretty close to the results of that drive. There remains a moment or two of off-the-line hesitation when accelerating from a stop. Our previous hypothesis was that this was potentially due to the CR-V Hybrid’s mechanical all-wheel drive system, but the Accord Hybrid is of course front-wheel drive only. This might instead be done to protect the battery, as a hard launch would put a pretty big dent in the battery’s charge (considering it’s only 1.4 kwh) and with the gas engine setup to only assist at cruising speeds that initial burst would be entirely dependent on stored energy.

After you get past that initial pause, the Accord Hybrid catches up nicely. There’s still some disconnect between the way the engine’s revs climb and the acceleration you feel, but the acceleration feels constant. I’m guessing I’d get used to it after a week or two with the vehicle. Much like in the CR-V Hybrid, the Accord Hybrid shines most from 10-40 mph. In this range the drivetrain feels extra torque-y and responsive, similar to driving a battery-electric. It made the Accord Hybrid more fun than I thought it would be to pilot on the same punishing canyon roads that I like to test sports cars on, it was easy to precisely accelerate and carry speed out of corners.

At highway speeds, the Accord Hybrid cruises along placidly. I was only able to get the gas engine to clutch in and drive the car by itself after I’d gotten up to speed on the highway. There could be a wider range of environments where this happens but it would take a longer test to find them all. High-speed passing acceleration is not as pronounced as it was at lower speeds, but it still moves in a reasonably quick fashion.

Honda also noted that the Accord Hybrid can travel up to one mile on battery power alone in its “EV” drive mode. I couldn’t get a good read on that claim, because the gas engine kicks on unless you’re very delicate with the throttle to a nearly unsafe degree. The gas engine also fired up the moment I get around 32-33 mph in my driving conditions, so it’s only a low-speed application as well.

Unlike the CR-V, Honda did give us some 0-60 mph times for comparison. The Accord Hybrid makes the sprint in 6.7 seconds, beating the Toyota Camry Hybrid by 0.7 seconds and the gas-only Accord (with the 1.5T) by 1.0 seconds. Beyond the powertrain’s performance the rest of the Accord Hybrid’s driving experience also left me impressed, in particular the brakes. Pedal feel is very linear and confidence-inspiring, and the shifts between regenerative and normal braking are imperceptible to the driver. Under hard braking, the front of the Accord Hybrid stays impressively balanced without a lot of nosedive and the car tracks straight as an arrow.

All of the Accord Hybrid models also come with “paddle shifters” that are used to control the amount of regenerative braking that’s being applied with three different settings. Even at its highest setting, the regenerative braking won’t reach the point where you would consider one-pedal driving. The slowdown is noticeable when you lift off of the accelerator pedal, but thankfully it’s still quite smooth. This effect lessens in the other two settings, with the most mild setting being barely noticeable at all.

Beyond the drivability improvements, the 2021 Accord Hybrid gets several livability improvements that have a large effect as well. Android Auto and Apple CarPlay are now standard on all trim levels and the EX and above trims add wireless connectivity for both smartphone mirroring apps (as well as a wireless charger). Honda Sensing also gets a needed update, with its lane keeping system adding lane centering technology so the car doesn’t ping pong down the road, as well as low speed following for the adaptive cruise control so it works in traffic now. This brings the Accord (and other Honda vehicles) up to par with the rest of the competition. Touring models also add a low speed braking control system, designed to work from 1-6 mph (aka in parking lots).

The EX or EX-L trims of the Accord Hybrid are the best value and will likely prove to be the most popular. This is helped by the fact that they get better fuel economy, rated at 48 mpg city, 48 highway, and 48 combined. The Touring weighs more and is only rated at 44/41/43 mpg, and I’m not sure its features are worth the $4,000 premium when the EX models feature wireless smartphone mirroring, and the adaptive dampers are not really a necessity on the Accord Hybrid.

The 2021 Accord may still be one of the top-selling midsize sedans, but the Hybrid has way more executive polish than the name would imply. The Accord Hybrid is just the latest in a series of vehicles where the hybrid version drives markedly better than its gas counterparts. And with the price gaps between the models continuing to shrink it’s becoming harder to justify why you wouldn’t pick the electrified version because the 2021 Honda Accord Hybrid is by far the best midsized hybrid we have ever tested.