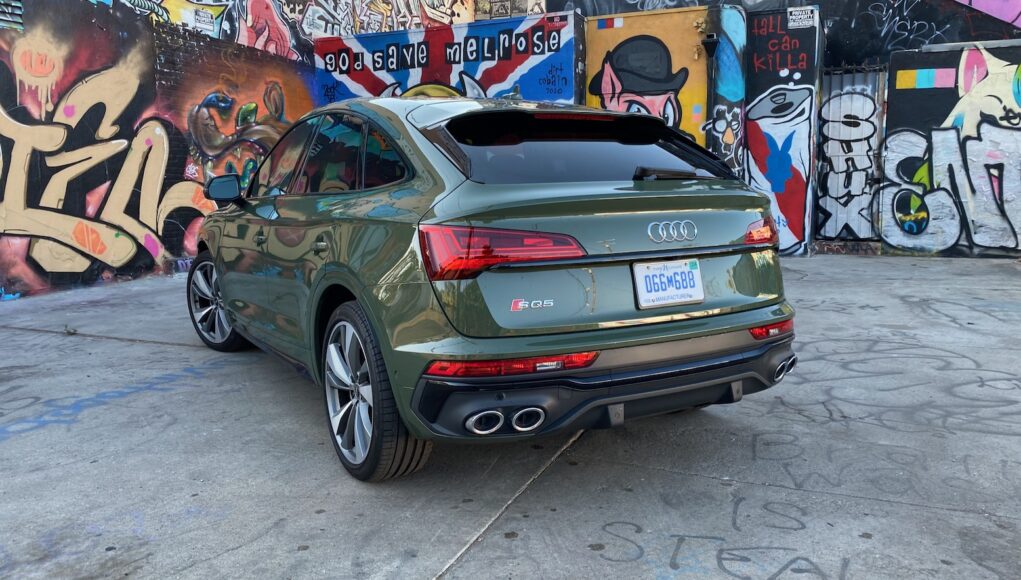 Audi continues to expand its SUV lineup and while we’ve had the Q3, Q5 and Q7 for years, it’s now jumping in on the crossover coupe trend. Audi already offers the Q8, which is a sportier alternative to the Q7 and now Audi has introduced the Q5 Sportback and SQ5 Sportback models, which are for buyers that like the Q5, but want a sportier look.

For this review we’re focusing on the sportier of the two, the SQ5 Sportback. From the front you won’t really see the difference between the SQ5 and SQ5 Sportback, but as you move to the back you will see the big difference. The Sportback models get a unique rear end that is more stylish and interesting to look than the non-Sportback models.

The SQ5 Sportback swaps out the 2.0-liter in the Q5 and is instead powered by a 3.0-liter turbocharged V6 with 349 horsepower and 369 pound-feet of torque. The V6 is mated to an eight-speed automatic transmission and the quattro all-wheel drive system. That extra power gives the SQ5 Sportback a 0-60 mph time of only 4.7 seconds and the all-wheel drive system can send up to 85 percent of the power to the rear wheels. The SQ5 Sportback has some pretty good competition, like the BMW X4 M40i and Mercedes-AMG GLC 43 Coupe.

While 349 horsepower comes in below the X4 M40i with its 382 hp 3.0-liter six-cylinder, it still packs a nice punch. The Mercedes-AMG GLC 43 Coupe does have more horsepower than the SQ5 at 385 hp, but it also accelerates to 60 mph 4.7 seconds. Although the SQ5 Sportback is great, we do wish that Audi would offer an even more powerful RS Q5, which would rival the BMW X4 M or the Mercedes-AMG GLC 63 Coupe.

Around town the SQ5 picks up speed fast and the transmission shifts through its eight gears without any drama. Power is ample, but not over the top like in the X4 M. There are sportier driving modes as well, which makes it even more fun to drive. Its steering is quick as well, but we do wish it had a bit more feedback, since it’s a bit light.

The SQ5 comes with an adaptive dampers, while an air suspension is optional. On those back country roads, the SQ5 stays planted to the road without any body roll. The excellent chassis begs for more and again we wish that it had more power to make it even more fun. The suspension does an excellent job of keeping everything under control, but at the same time it isn’t punishing on imperfect roads.

Inside there’s room for five passengers and just as you expect from any other Audi, the interior is stylish and constructed of the best materials. At the same time the interior also stands out because it does without the clutter that plague some of its rivals. The dashboard’s simple layout looks clean and is easy to use.

Although the SQ5 Sportback has a sleeker rear end than the standard SQ5, there’s still plenty of room for five passengers. We especially love the sport seats that hold you perfectly in place when you’re tackling the twisties. The diamond stitching on the seats is also a nice touch.

On the top of the dashboard there’s a 10.1-inch touchscreen that runs the latest MIB 3 infotainment system. The system is fast and easy to use. Wi-Fi, a head-up display and the 12.3-inch virtual cockpit are there as well. A 19-speaker Bang & Olufsen audio system is also available.

At the end of the day, the 2021 SQ5 Sportback is a great crossover for buyers that still want to have some fun. It’s sleeker roofline and more stylish rear end make it stand out and the turbocharged V6 makes it more fun to drive than a typical crossover.