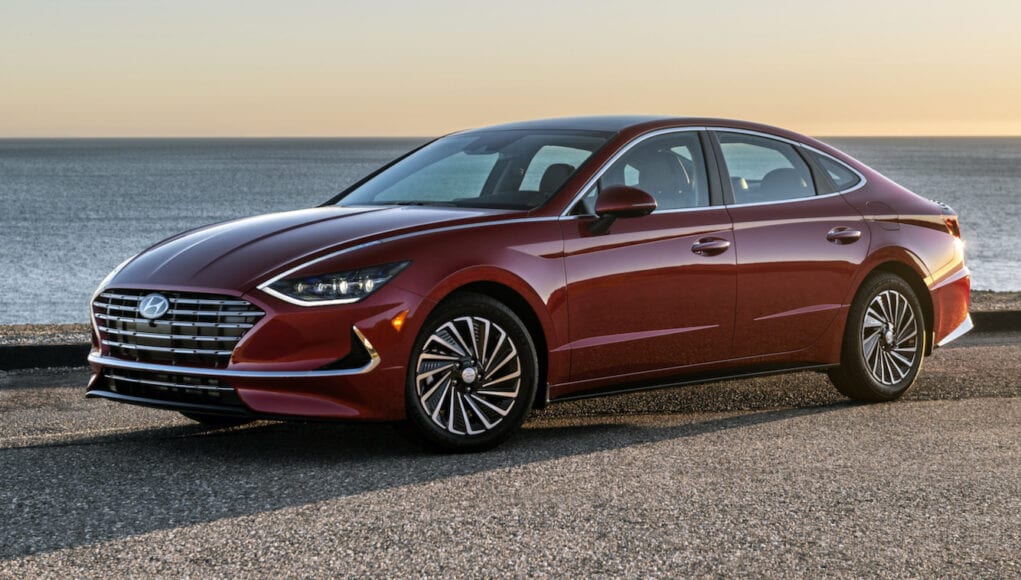 The Hyundai Sonata finds its magic again for 2020, with a distinctive luxury-car vibe plus some features you won’t find in rival sedans. Although mid-size sedans might no longer be the heart of the American market, Hyundai shows with the redesigned 2020 Sonata that it can put its heart into one. The 2020 Hyundai Sonata has a dramatic new design that finally brings the exterior look of this sedan up a higher standard. The Sonata is a standout for offering the interior comfort of a more expensive luxury sedan, strong safety scores, and a good feature set for the money.

There are three powertrains on offer in the 2020 Sonata: a 2.5-liter inline-4 that makes 191 horsepower, a 180-hp 1.6-liter turbo-4, and a hybrid system that altogether makes 192 horsepower. The turbo-4 makes its full torque at low rpm so it should feel stronger than the base engine. It’s smooth and relatively quiet; the Hybrid, which was our test vehicle feels like it might be the quickest in the lineup. In any case, the Sonata steers precisely and handles well, but it’s nowhere near as sporty as the quickest versions of some competitors.

The Sonata offers some unique items at the top of its lineup, including Hyundai’s first smartphone-based key system, and Smart Park remote self-parking feature. The Solar Roof System offered on top Hybrid models can find free miles with enough sunlight. The Sonata Hybrid is already the highest-mileage sedan on the market and rated by the EPA at 50 mpg city, 54 highway, 52 combined.

The 2020 Hyundai Sonata lineup looks sporty and curvaceous on the outside, soft and luxurious inside. By design and styling, the Sonata is the standout among today’s affordable midsize sedans. Hyundai’s “Sensuous Sportiness” theme makes the car look a class above. In a way, Hyundai took a step back to take two steps forward with the new car. The outgoing Sonata made some major advances inside, with a much more refined cabin, but its exterior didn’t say much. The new Sonata follows the 2011-2014 Sonata more than its direct predecessor, and that’s mostly a good thing. It at last melds the swoopy, racy statement on the outside with a soft, luxurious interior, something that was missing previously.

Compared to the previous Sonata, this one sits slightly lower in almost every respect, with a steeper windshield rake, too. Even though the Sonata is within an inch of nearly all of its rivals in nearly all key dimensions, that plays a trick with perspective in making the Sonata look lower and wider. A semi-trapezoidal grille is low-set and takes the torch from Ford in trying to out-Aston Aston Martin. Boomerang-style LED strips lock the headlights into place, and they form the start of a vapor trail that ripples along the car’s side. There’s a lot of sculpting and motion in the side sheet metal, and the rear lamps come as a visual surprise, a clean arc across where you might expect to see more sculpting. It makes the Sonata look wider and visually lifts the lower tail.

The base engine in the Sonata lineup is a new-generation 2.5-liter inline-4 that makes 191 horsepower and 181 pound-feet of torque. The direct-injection engine has a lot of engineering refinements but the one that shoppers will notice on a quick test drive is its smoothness. A 1.6-liter turbo-4 is a step up from the base engine and makes 180 hp and 195 lb-ft. It’s a different engine than the similarly sized version in last year’s Sonata, and it’s paired with a new 8-speed automatic transmission instead of a dual-clutch automatic for better drivability and smoothness. The Sonata Hybrid’s 2.0-liter inline-4 makes 150 hp, and an electric 51-hp motor is packaged with a 6-speed automatic. Its combined output is 192 hp, and Hyundai has refined the hybrid’s powertrain with new Active Shift Control tech that makes the motor more proactive in transmission shifts.

The standard gas-only Sonata models come with an 8-speed automatic transmission, and a Drive Mode system (Smart, Normal, Custom, and Sport) that affects the responsiveness of the accelerator and transmission shifts, as well as the steering effort. Smart mode follows an adaptive logic to anticipate what you need and is fairly smart in its actions. The suspension layout follows a front-strut, rear multi-link layout and feels soft for comfort but responsive. Steering is precise and on the light side, and the Sonata drives in a relaxed way.
The calm ride keeps out quivers and sharp bumps, as well as road noise. It might be the quietest mid-size sedan on the market, and to get there engineers used thicker door glass, improved window sealing, added a standard acoustic windshield, with front side window glass in some models, and put reinforced sound absorbing material underneath.

The 2020 Sonata Hybrid Blue gets the best mileage of any sedan without a plug, while the rest of the Sonata lineup is competitive. The Hyundai Sonata comes in three different powertrains: 1.6T, 2.5-liter, and Hybrid, and they all achieve more than an EPA-rated 30 mpg combined. The base 2.5-liter is the best of the non-hybrid versions, at 28 mpg city, 38 highway, 32 combined, but the 1.6T isn’t far behind, at 27/36/31 mpg. The 2020 Hyundai Sonata Hybrid SEL and Limited models carry ratings of 45/51/47 mpg, while it rates 50/54/52 mpg in its lighter, eco-focused Blue version. That’s the highest EPA highway rating of any sedan. Solar panels on the roof that are included in the Sonata Hybrid Limited is rated at 205 watts and, Hyundai claims, can generate about 700 “free” engine-off miles annually, which boosts fuel economy. In our week with a Hybrid Limited we averaged an amazing 48.1 mpg.

The 2020 Hyundai Sonata has a starting position as one of the safest midsize sedans with its new body already paying off in crash tests. The Sonata achieves a five-star overall rating from NHTSA and it’s an IIHS Top Safety Pick, including top “Good” scores in the full battery of crash tests. The IIHS rates the LED projector headlights in the Limited models as “Good,” while the other models’ headlights are rated “Marginal.” The Sonata’s active-safety systems also earn the top “Superior” rating in front crash prevention. Standard features across the lineup include automatic emergency braking, adaptive cruise control, active lane control, and a driver-attention monitor. Top Limited models get a rear cross-traffic assist feature, a surround-view camera system, and blind-spot monitors.

The 2020 Hyundai Sonata feels as luxurious as it looks, with a comfortable, supremely quiet cabin. The Sonata’s interior is indeed sensuous, and at least in the Limited versions, it surrounds in soft-touch trims and makes sure all the switchgear feels just right. Actual seat comfort isn’t anything special, but the available upholsteries are soft and inviting. The ambience of the whole cabin, with superb smoothness and quiet, sets the interior mood as warm and calm. Quilted seats in some models are distinctive and luxurious, and the recessed doorpulls have a soft surface to hold on to.

The big, 10.3-inch infotainment screen stands atop the dash, but it’s connected enough to the design so as not to look like a tacked on screen. The horizontal look of the dash echoes that rear look, in a way, and the layout feels traditional with the gauges directly in front, the climate control in a center stack, and a well-defined center console. The push-button shift selector, plus the upscale black-gloss surfacing to touch points, flips the whole presentation to the luxury realm. Based on the tactile look and feel of everything from the push-button shift controls to the steering-column stalks and the harmonious feel of surfaces and switchgear, the Sonata easily hits above it’s class.

Based on its roofline, and the deceptive way it plays with perspective from some steps away, you might expect the Sonata to cheat rear head room, or at least be tough to get into. It is neither. To achieve that, Hyundai says that its engineers lowered the height of the rear seat, with a slightly thinner cushion. It’s not a difference we would have been aware of. Trunk space is generous for a modern mid-size sedan, at 16.0 cubic feet.

Hyundai offers a best-in-class warranty, better-than-average infotainment systems, and good value for money. The Hyundai Sonata starts at $24,555 for the base SE and runs up to $34,455 for the Limited 1.6T. Although Hyundai used to be known for packing in features at the base level, it’s the top Limited model that’s more intriguing, mostly because of its unique features.

The base SE model has cloth upholstery, 16-inch wheels, LED headlights, and an 8.0-inch touchscreen with Apple CarPlay and Android Auto compatibility. The Sonata SEL adds synthetic leather upholstery, a power-adjustable driver seat, heated front seats, keyless ignition, automatic climate control, and satellite radio. It’s a great value, hybrid or otherwise for $30,000 or less. The SEL model, or the SEL Plus with the 1.6T engine, also taps into more option possibilities, such as leather seats, wireless smartphone charging, a panoramic sunroof, highway drive assist, and a 10.3-inch touchscreen with navigation. The Sonata is also the first Hyundai to offer a smartphone-based, digital key.

Top Limited versions gets a power-adjustable passenger seat, cooled front seats, paddle shifters, parking sensors, and tech not usually found in mainstream mid-size sedans, such as a head-up display, and Smart Park, that can steer the car into or out of a space without a driver inside. A standout feature for the 2020 Hyundai Sonata Hybrid Limited is its solar roof that can generate energy to increase gas mileage. Hybrid models come in Blue, SEL, and Hybrid trim levels. Sonata Hybrid Blue models get roughly the same equipment as Sonata SE versions. All Sonata’s gets a standard very generous 5-year/60,000-mile warranty.

The 2020 Hyundai Sonata is the most impressive Sonata ever. With elegant styling, a cosseting cabin, and leading edge technology the new 2020 Sonata is a tour-de-force to be reckoned with. The Sonata’s class-leading fuel economy and an impressive warranty make it a true standout in the crowded midsize class. For all these reasons and more, the 2020 Hyundai Sonata deserves to be on everyone shopping list.