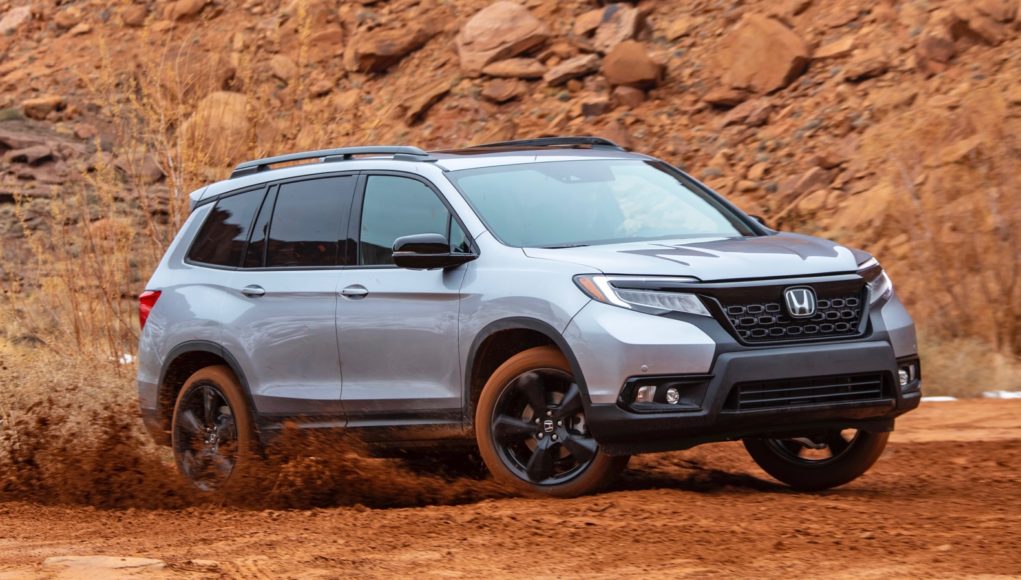 Back in the mid-1990s Honda tip toed into the SUV segment with the Isuzu-based Passport, but after two generations the rugged Passport was replaced by the more family friendly Pilot. Now it’s back! Honda’s team realized a gap in its current SUV lineup, where it was losing buyers that wanted something slightly bigger than the CR-V, but not as big and family oriented as the Pilot.

The 2019 Honda Passport is based on the same platform as the Pilot and Ridgeline, but it does get quite a few changes to help it appeal more to an adventurous buyer. To start the Passport has the same wheelbase as the larger Pilot, but Honda deleted six inches from the rear. The Passport also rides about an inch higher than the Pilot to make it more capable off-road.

The Passport is powered by the same 3.5L V6 as the Pilot, which gives it 280 horsepower and 262 lb-ft. of torque. The V6 is mated to a nine-speed automatic transmission and Honda’s torque vectoring i-VTM4 is optional. To give the Passport a bit more character than the Pilot, Honda’s engineers gave it a quicker steering ratio, improved the brake feel and retuned the shocks and springs.

When Honda decided to bring the Passport back, it had to decide not only where to place it in its lineup, but also where it should land amongst its rivals. At the soft end of the midsize SUV segment we have the Ford Edge and Nissan Murano, while the Jeep Grand Cherokee and Toyota 4Runner are a bit more rugged. Rather than create a soft riding crossover or a hard edged off-road hungry SUV, Honda decided find the sweet spot in the middle.

The goal was for the new Passport to perform better on-road than the 4Runner, but then also have more off-road capability than the Murano or Edge. According to Honda the Passport has been designed to be able to be just at home navigating the city streets as it is hitting the trails. After spending some time behind the wheel of the 2019 Passport in Moab, Utah we can say that Honda has succeeded.

Part of the Passport’s charm and ability to tackle the terrain is its torque vectoring all-wheel drive system. It can send up to 70 percent of the power to the rear wheels and 100 percent of that power to either the left or right wheel. Not only does the system manage to find the wheel with the best traction without any hesitation, the system also improves the Passport’s on-road performance.

The I-VTM4 system has four driving modes: Normal, Snow, Mud and Sand. The Normal mode is where you’ll obviously spend most of your time, but with the press of simple button you can select the mode you need. The different driving modes not only adjust the throttle, but also the transmission’s shift points, the stability control settings and the amount of torque that’s sent to the rear wheels.

Can the Passport climb over a hill, zoom across a stream without any effort or rip through the mud on that back trail? Yes. After driving through mud, some light snow, plenty of dirt and even climbing over some hills, we can say that Passport took everything we could throw at it with ease. Is it as tough as a 4Runner? No. You won’t see all the skid plates on the bottom of the Passport, like you do the 4Runner. Plus the Passport doesn’t offer some of the latest hardcore off-road driving tech, like locking differentials or hill descent control.

On the road, the adventure-ready Passport may ride higher than the Pilot and on a slightly sportier suspension, but it’s just as comfortable and quiet as its bigger brother. We didn’t notice that much body roll, although the Passport’s light steering discourages you from trying to have too much fun on those back country roads. Compared to the rugged 4Runner, the Passport is more comfortable place to be on the road. It’s interior is quieter, more spacious and feels a lot more luxurious.

If towing a trailer is your thing, the Passport can tow up to 5,000 pounds, which is more than the Murano, Edge and even the new Chevy Blazer.

The interior is nearly identical to the Pilot, which means you’ll find a lot more creature comforts than you will in the 4Runner. There’s trim-zone climate control, heated and ventilated front seats, heated rear seats, and a 560-watt audio system with Apple CarPlay and Android Auto.

The 2019 Honda Passport goes on sale on February 4, starting at $33,035. The Passport will be available in four trim levels: Sport, EX-L, Touring and Elite.

When the Passport originally left Honda’s lineup in the early 2000’s, it left a major hole in the brand’s lineup SUV lineup. The car-like CR-V and Pilot sell extremely well, but they both don’t entirely appeal to that adventurous guy who likes to have fun on the trails, which is where the new Passport will come in. With the return of the Passport, Honda’s lineup is now more complete than ever before, well almost. I’m sure there are some people out that that wish the Element also made a return.