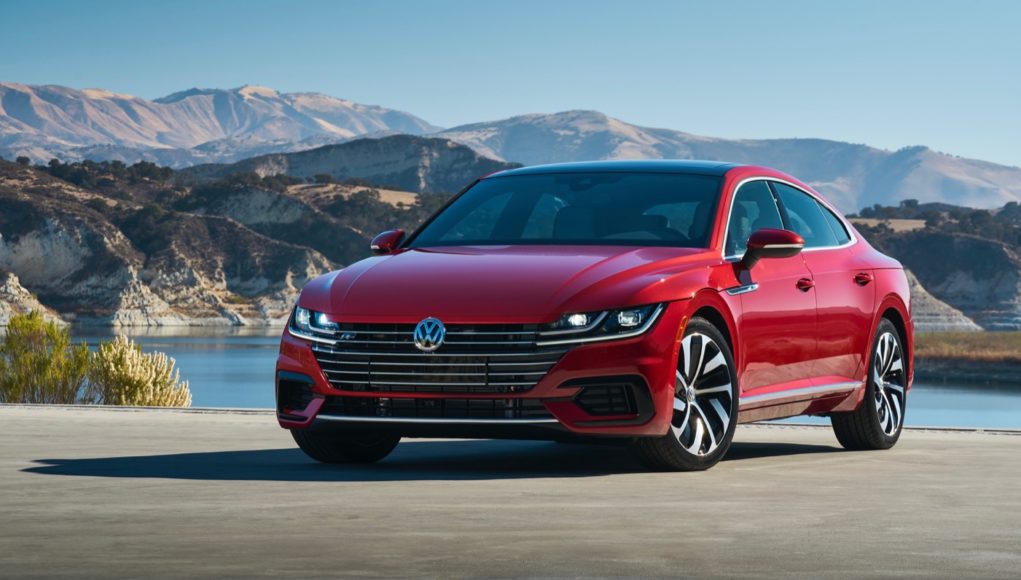 The Volkswagen CC is long gone and its place we have the stunning 2019 Arteon. While the CC was basically a more stylish Passat, this time around the Arteon takes things up a notch higher to fully fill the role as the brand’s flagship vehicle. Yup its being positioned higher than even the three-row Atlas SUV in VW’s lineup, but can the Arteon really fill such big shoes? Yes.

The 2019 VW Arteon is based on the brand’s MQB platform, which means it very little in common with the family oriented Passat in the US. Compared to the old CC, the Arteon has a 5-inch longer wheelbase, which explains the 2.9-inch increase in rear legroom. There are also big gains in the cargo department, but even with the bigger interior, the Arteon still manages to look sleek and sexy. The stylish exterior is hinted at with the Arteon name, which is derived from the Latin word artem, which means “art.”

While the exterior can be seen as a work of art, we do wish VW would offer a more inspiring powertrain under the hood. The Arteon is only available with one engine, a turbocharged 2.0L four-cylinder that generates 268 horsepower and 258 lb-ft. of torque. The four-cylinder is mated to an eight-speed automatic transmission. In standard spec, the four-cylinder sends its power to the front wheels, but all-wheel drive is optional.

The turbocharged four-cylinder provides enough pep to get you moving down the road, but it lacks personality. The Kia Stinger with its turbocharged V6, is more fun to drive. The old CC was available with a more powerful VR6 engine, which we wish was an option on the Arteon. On the road the Arteon’s suspension does a good job of keeping the road’s imperfections out of the cabin, but at the same time the suspension isn’t too soft. The suspension and steering are tuned for the near perfect balance between comfort and sport, but we do wish the Arteon was a bit sportier to drive, like the Stinger.

Inside the Arteon’s interior takes a page out of a minimalists handbook. The interior is clean and uncluttered, but it lacks a bit of personality, but at least it isn’t overstyled like some of its rivals. The plus is there’s lot of room for you and your friends in the Arteon. Thanks to its longer wheelbase there’s plenty of legroom for everyone. Also if being able to carry a bunch of stuff is on your must have list, the Arteon’s fastback design gives it a hatchback trunk, like the Stinger. There’s a lot of space. With the rear seats up there’s 27.2 cubic feet of cargo capacity, which expands to 55 cubic feet with them folded. Who expected something that’s so stylish, to also be practical?

As the successor to the CC, the Arteon has dialed up the style quotient a bit, while also adding a bit more versatility. The Arteon easily succeeds as a true flagship for the VW brand, but the only thing going against it now is the fact that buyers aren’t too keen on big sedans anymore. Will the crossover hurt the Arteon just like several of its other rivals? We’ll have to wait and see, but if you want to go against the grain, the Arteon is worth checking out.