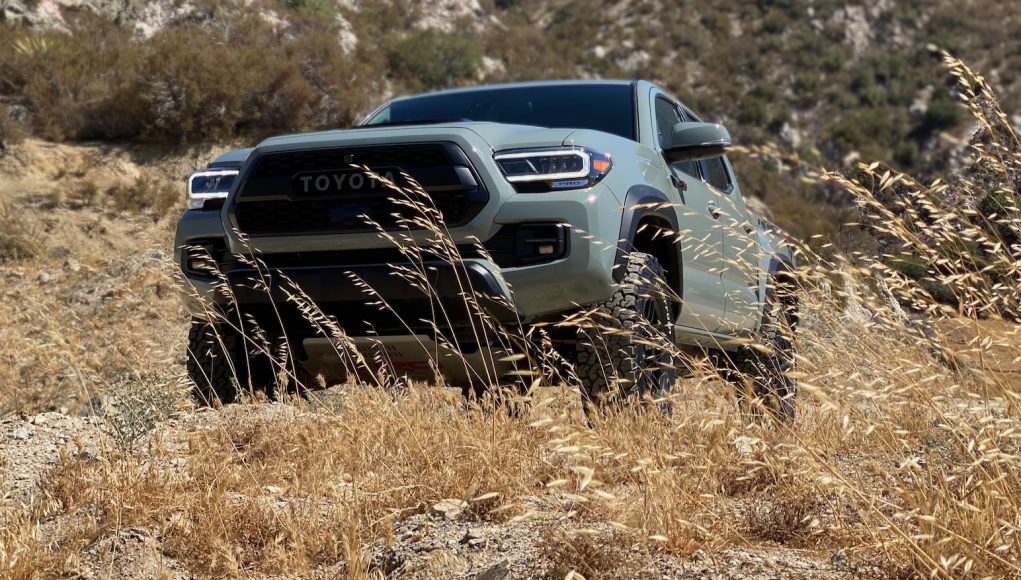 The Toyota Tacoma is one of the oldest pickups in the midsize segment, since the current generation has been out since 2015. Although the Tacoma is a bit long in the tooth, that hasn’t mattered to buyers, since the Tacoma continues to dominate the sales race. Today the Tacoma is offered in several versions to appeal to as many buyers as possible, but the Tacoma TRD Pro is easily our favorite.

The Tacoma TRD Pro rivals other off-road midsize trucks, like the Chevy Colorado ZR2 and Jeep Gladiator Rubicon. Compared to those rivals, you will find a some compromises with the Tacoma, like its outdated tech, but again that doesn’t really matter here, since buyers continue to scoop it up.

On the outside the Tacoma TRD Pro looks the part with its boxy, rugged styling. It stands out and although its design is quite old, it can still hold its own. At the front there’s a hood scoop and more aggressive face with “TOYOTA” sprayed across the grille. It also rides on nice black 16-inch wheels and underneath you’ll see the aluminum skid plate with the TRD logo. The TRD Pro also stands out from the rest of the Tacoma lineup with its blacked out headlights, Rigid Industries LED fog lights and black badging. We can also not ignore the graphics on the sides of the bed and hood.

Inside the Tacoma TRD Pro attempts to feel a bit luxurious with its leather seats, heated front seats and power driver’s seat. The overall design of the interior is laid out well, but it definitely shows its age more than exterior. This is most evident with the small 4.2-inch display in the gauge cluster and the eight-inch touchscreen with its dated graphics. The TRD Pro does get a nice JBL audio system and wireless charging. There’s also some TRD branding inside, like on the front headrests and rubber floor mats.

The interior is spacious enough for you and four of your friends, but headroom is not plentiful, due to the high floor. Its seats are supportive and comfortable, even when you’re hitting the trails, the interior tries to keep you as comfortable as possible.

Under the hood there’s Toyota’s trusted and reliable 3.5-liter V6 with 278 horsepower and 265 pound-feet of torque, that can be mated to either a six-speed manual or automatic transmission. The V6 has a great sound, but it does feel a bit old as well. Especially on the highway where it feels a bit anemic when you’re trying to pass another vehicle. The six-speed automatic is also old by today’s standard of eight-, nine- and ten-speed automatic transmissions.

Although we did want a bit more from the engine, the rest of the package is up for the challenge. The TRD Pro comes standard with 2.5-inch Fox Racing shocks and unique front springs that adds a 1-inch lift. It also has a locking rear differential, plus the Multi-Terrain Select and Crawl Control systems make it even easier to navigate the trails. Once the paved road ends, the Tacoma TRD Pro is ready. It traversed rocks and zoomed through sand with ease.

Even with the off-road tuned suspension, the TRD Pro doesn’t punish you on paved roads. The ride quality is still good, which means that the Tacoma TRD Pro can double as either a commuter vehicle or an off-road beast. We do wish there was a bit more feedback from the light power steering system.

As buyers continue to ditch cars, the truck segment is going to continue to get hotter. There’s finally a new Nissan Frontier and even Hyundai has entered the ring with its compact Santa Cruz pickup. But at the end of the day, the Tacoma continues to be one of the best midsize trucks you can buy, even with its compromises. The Tacoma TRD Pro may be on the older side, but it still looks great, its reliability is unmatched and its resale value is at the top of the segment.