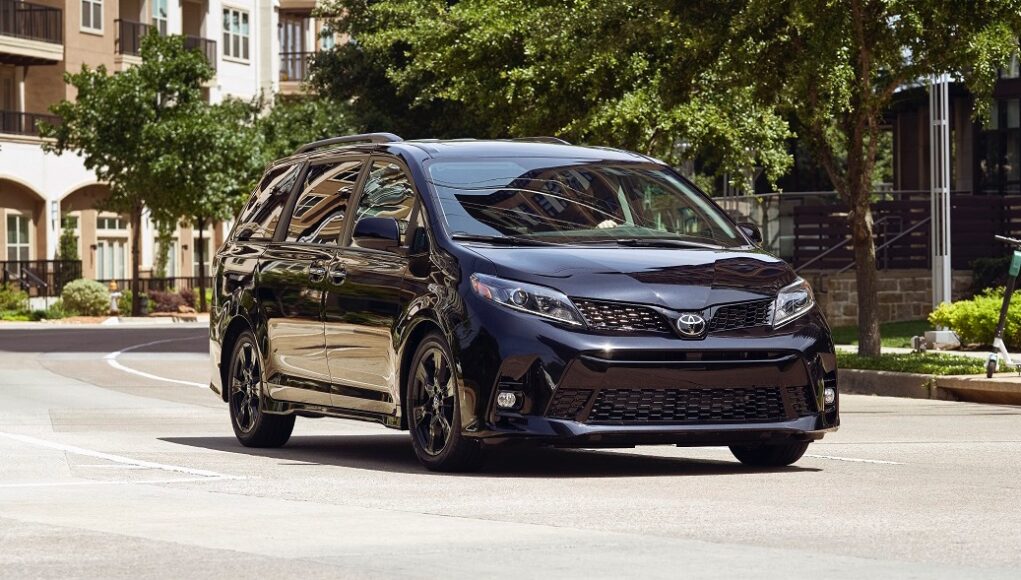 The 2020 Toyota Sienna minivan is an older design that hasn’t changed much in a decade, but it remains a good choice for its value, impressive power, and its optional all-wheel drive. The Sienna carries over unchanged after last year’s addition of Apple CarPlay and Amazon Alexa compatibility. The Sienna offers all-wheel drive, and last year Toyota expanded the system’s availability to six of the van’s seven trim levels, including the sporty Sienna SE, which features muscular exterior styling, larger wheels and tires for a better-handling, but firmer-riding suspension.

All seven trim levels, L, LE, SE, XLE, and Limited, come with a long list of standard active safety systems and driver aids and most versions can be ordered in seven- and eight-passenger configurations. Every Sienna is equipped with 3.5-liter V-6 that makes a hefty 296 horsepower. An 8-speed automatic and front-wheel drive are standard, and all-wheel drive is optional. The Sienna is powerful for a minivan and it rides well. Sienna SEs have a firming riding suspension but handle slightly better.

The van’s 164 cubic feet of passenger space is among the more spacious minivans on the market. Remove its seats and it can swallow several 4-by-8 sheets of plywood like a pickup truck. Other cool family-friendly features include a loudspeaker that projects the driver’s voice to rowdy kids in the back, and an available Blu-ray player to keep them occupied. Every 2020 Toyota Sienna is equipped with adaptive cruise control, forward-collision warnings with automatic emergency braking, automatic high-beam headlights, and active lane control.

Most people don’t buy a minivan for its styling. After a decade with few styling changes, the look of the 2020 Toyota Sienna isn’t cutting-edge. Updates to its grille, headlights and bumpers last year help to keep the Sienna looking fresh. Although all 2020 Sienna trim levels share a basic shape, Toyota has done a good job differentiating each version. The sporty SE model has different bumpers with an open lower section up front, plus clear taillights and bigger 19-inch wheels. The grille worn by the top Sienna XLE and Limited models is dressed in extra chrome. Most trim levels also get their own wheel designs, too.

With its smooth and powerful V-6, along with the unique availability of all-wheel drive, the 2020 Toyota Sienna is a solid performer. Every 2020 Toyota Sienna come with 296 horsepower, from a 3.5-liter V-6 that delivers smooth, quiet acceleration. The van’s 8-speed automatic transmission is programmed to shift up quickly to save fuel. When called upon, it shifts smoothly and fits the Sienna’s relaxed character. All versions come standard with front-wheel drive. All-wheel drive is offered on six of the van’s seven trim levels. The Sienna’s steering is light and accurate and its thick steering wheel.

The Sienna’s cabin isn’t as hushed as some rivals, but the Toyota is smooth, comfortable and refined. In Sienna SE guise, the van rides firmer, but it isn’t rough or uncomfortable. The trade-off is improved roadholding, though it’s far short of sporty. With all-wheel drive, the Sienna is ready for a ski trip or a winter commute and we’re not sure why many other vans don’t offer the same feature. That’s a solid combination, plus the Sienna and Chrysler Pacifica are the only minivans available with all-wheel drive.

The fuel economy of the 2020 Toyota Sienna equals the performance of its V-6 rivals, however, its fuel efficiency dips expectedly so when equipped with all-wheel drive. The EPA rates front-wheel-drive versions of the 2020 Sienna at 19 mpg city, 26 highway, 21 combined. With all-wheel drive, which is available on all trim levels except the base Sienna L model, EPA ratings dip to 18/24/20 mpg. All versions are rated to run on regular unleaded. In our week with a Limited all-wheel-drive version with averaged 20.8 mpg, slightly better than EPA estimates.

Every 2020 Sienna has forward-collision warnings with automatic emergency braking, adaptive cruise control, active lane control and automatic high-beam headlights. The NHTSA awarded the Sienna five stars overall, but the van scored just four stars in the side impact test and for rollover. In IIHS received an “Acceptable” overall score for its driver-side safety in the small front-overlap test, and a “Marginal” score for that same test on the passenger side. Those tests simulate impact with an object such as a utility pole or oncoming traffic. Otherwise IIHS awarded the Sienna “Good” ratings, and the organization rated the van’s automatic emergency braking system “Superior.”

In 2018, Toyota updated the van’s curvaceous dashboard, which houses a 7.0-inch touchscreen. Higher trim levels also have a 4.2-inch screen in the gauge cluster for additional information such as fuel economy. If you need to haul people and their stuff, few vehicles do it better than the 2020 Toyota Sienna. If comfort, space and capability are what you are after in a minivan, the 2020 Toyota Sienna delivers, even if rivals do so with more style inside.

The 2020 Toyota Sienna stretches about 200 inches from bumper to bumper, meaning it’s large both inside and out. Its doors slide open to reveal 164.4 cubic feet and a highly configurable cabin. There’s seating for eight, or seven with the optional second-row captain’s chairs, and the middle seats can be removed to turn the Sienna into an enormous cargo van. Unfortunately, the Sienna’s second-row seats don’t stow away in the floor and instead have to be unlatched and lifted out. In the top Sienna Limited trim, the second row captain’s chairs recline and feature foot rests and leg cushions.

A power-folding third-row bench is standard on higher trims. The third row is split 50/50, for multiple passenger or cargo configurations. It’s also large enough to fit adults comfortably. With the third row folded flat the Toyota Sienna offers 118 cubic feet of cargo space. But the real surprise is the van’s minimum cargo space, which measures 39.1 cubic feet behind its third row. That’s enough room for several suitcases and backpacks, something most crossover SUVs would struggle to accommodate.

The 2020 Toyota Sienna is packed with features, however, some if its competitors offer features unavailable on the Sienna. Chances are there’s a 2020 Toyota Sienna to satisfy most minivan buyers. The van’s extensive list of standard features is augmented by a wide range of options and decent infotainment. Even the base Sienna L has a suite of active safety systems, a 7.0-inch touchscreen infotainment system with Amazon Alexa and Apple CarPlay compatibility. Don’t look for Android Auto compatibility, but at least there are five USB ports to keep teenagers satisfied. Toyota also offers a dual-screen Blu-ray system.

For most buyers, the gateway to the lineup is the Sienna LE, which comes with dual power sliding doors, stain-resistant cloth upholstery, and a power driver’s seat. The luxurious XLE adds a power passenger’s seat, leather upholstery, and a moonroof, while the Sienna Limited features a power-folding third-row bench and an innovative loudspeaker system that amplifies the driver’s voice to the second and third rows of the van. Buyers looking for a more athleticism from their minivan should check out the Sienna SE, which slots between the LE and XLE with larger 19-inch wheels and tires with a sportier suspension.

The 2020 Toyota Sienna is well equipped, offers features not found on some of the competition, and in doing so, is a great value. The fact that it comes with Toyota reliability and resale value are just a bonus. With a refined powertrain offering all-wheel-drive and large interior volume, the 2020 Sienna should be on everyone’s minivan shopping list.