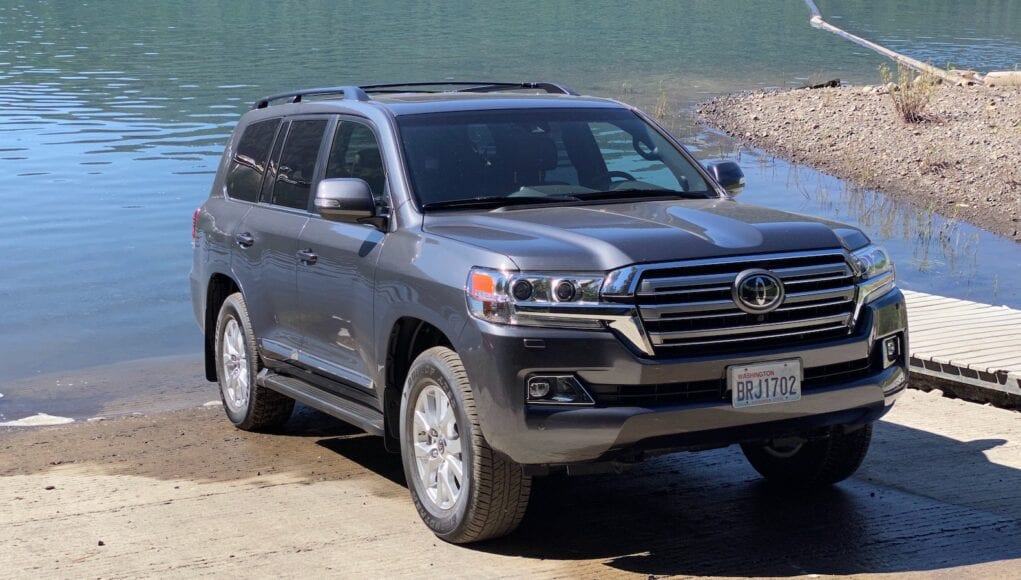 The 2020 Toyota Land Cruiser is a bruiser with few luxuries for the money, but we love it anyway. The Land Cruiser is an immense SUV with serious four-wheel-drive capability, with an off-road heritage unmatched by most rivals. It’s not exceptionally well-suited to urban or even suburban life, but that’s part of this big 4×4’s charm. This year, the Land Cruiser comes in two trims, base and a new Heritage Edition that drops the third row and running boards and swaps in special 18-inch wheels and a roof basket. Nab a Heritage Edition fast as Toyota plans to build a limited number.

Underhood, all Land Cruisers use a thirsty but strong 381-horsepower 5.7-liter V-8 that teams with an 8-speed automatic transmission and standard four-wheel drive with a two-speed transfer case. The Cruiser’s arsenal of four-wheeling bits include a multi-mode traction control system, crawl control that allows the truck to lope along at a walking pace, and a trick system that reduces the turning radius in tight spots.

None of that does the 2020 Land Cruiser any favors around town, where it’s a large, but quick and soft-riding beast. Its passengers will find themselves in a spacious, airy cabin, as long as they’re not in the available third row. The cargo hold is accessed through a split tailgate that powers a section upward at the tap of a button and folds the bottom into what’s either a convenient bench for tailgating or a hefty reachover, depending on your perspective.

Every Land Cruiser comes reasonably well outfitted with active safety gear, a 9.0-inch touchscreen, Bluetooth, heated and cooled front seats, and a moonroof, but don’t look for Apple or Android compatibility, a honkin’ sound system, or swanky open-pore wood trim. The 2020 Land Cruiser is hard to recommend for most shoppers who would be better suited in a Mercedes-Benz GLS or even a Range Rover, but that’s part of the non-conformist appeal that’s made the Cruiser a legend in its own time and neither of the others can match the Land Cruiser’s off-road ability.

With its retro bits in full force this year, the 2020 Toyota Land Cruiser tries to channel its rugged past. The big 2020 Toyota Land Cruiser takes up more space than just about anything in Toyota’s lineup short of its full-size pickups, and it has looks to match. It’s curvy and chromey, and hard to offend anyone, but we can appreciate its high stance and short overhangs. The Land Cruiser was designed for serious four-wheeling, which helps explain its short bumpers and high ride height.

The standard running boards make it easier to get into or out of, but pro tip: they look even better when they’ve been removed. Up front, the enormous chrome grille hides cameras and active safety gear, and is flanked by LED headlights, and yet it looks a lot like the 1991 Cruiser. This year’s new Heritage Edition adds bronze-finish forged wheels, deletes the running boards, tweaks some exterior finishes, and adds a roof basket that may require a ladder to access.

The 2020 Toyota Land Cruiser is seriously capable, if somewhat cumbersome in town. There’s nowhere the 2020 Toyota Land Cruiser would rather be than out exploring, even if its next adventure is a paved parking lot. The 5.7-liter V-8 is rated at 381 hp and 401 lb-ft of torque and furnishes strong acceleration, easily overcoming the nearly 6,000-pound curb weight. The 8-speed automatic transmission behaves well in many situations but is programmed to shift up with a quickness to save fuel. We’d forgive that if it actually had an impact on reducing fuel consumption.

The Land Cruiser makes use of a truck-like solid rear axle and separate ladder frame, which pay dividends in off-road ability and towing and help give the 4×4 a soft ride. Compared to unibody rivals such as the Mercedes-Benz GLS-Class, however, the Cruiser leans around on winding roads. The limited feedback provided by the light steering doesn’t help either. A trick suspension that pairs gigantic anti-roll bars that push down on the wheels in hard cornering helps alleviate the situation somewhat, and the system is tuned to allow for even more off-road articulation at slow speeds.

It’s away from the city where the Cruiser is at its best, either as an open-road guzzler or a four-wheeling champ. High-tech off-road traction control modes and a system that grabs the inside brake to reduce the turning radius at ultra-low speeds make it far more plucky than its heft would otherwise suggest. The few who will go on dirt-road adventures in their $87,000 SUVs are to be applauded and the Land Cruiser is the best of the bunch.

A hybrid powertrain would help the 2020 Toyota Land Cruiser explore even more distant places. The 2020 Toyota Land Cruiser is one of the thirstiest new vehicles available. It’s rated by the EPA at just 13 mpg city, 17 highway, 14 combined. Those highway and combined figures are actually a tick lower than last year’s Cruiser, though we’re not entirely sure why. Maybe the EPA dinged the Heritage Edition’s big roof rack. The only bright spot here is that Toyota recommends less-costly regular fuel for the Land Cruiser compared to the premium unleaded suggested for most competitors.

The 2020 Toyota Land Cruiser is equipped with a decent amount of collision-avoidance tech. The Land Cruiser isn’t ready to drive itself, but it can avoid collisions and keep a set distance from other cars in traffic. Neither the NHTSA nor the IIHS has pounded one into a wall yet so assessing crash-test scores is difficult. Maybe they can’t find a wall strong enough to resist the roughly 5,800-pound behemoth.  Every 2020 Land Cruiser is equipped with forward-collision warnings, automatic emergency braking that can detect pedestrians, blind-spot monitors, lane-departure warnings, and adaptive cruise control. Active lane control isn’t on the options list, unlike many competitors. Passive crash gear includes LED headlights, traction and stability control, and 10 airbags.

The 2020 Toyota Land Cruiser is spacious and plush, but not exactly luxurious inside. Front-seat and second-row occupants will find a lot to like in the 2020 Toyota Land Cruiser, at least once they’ve climbed aboard. Inside, the dash is dominated by a 9.0-inch touchscreen with a reasonably bright display. Every Land Cruiser leaves the factory with soft leather upholstery covering the first and second rows of seats. Drivers and passengers have plenty of adjustment on their heated and cooled thrones that offer an expansive view out. The second row has great space for two or even three adults in most situations and is heated. A rear-seat entertainment system with individual screens is available.

The third row comes standard on the base 2020 Land Cruiser and is dropped with the new Heritage Edition. Access to row three is a challenge for adults, who won’t find much room once they’re back there. The seats also get in the way when raised, and they aren’t easily removable. Cargo space behind row three is a reasonable 16 cubic feet with the third row upright, 43 cubes with it stowed upright, and about 82 cubic feet with the second row folded forward. The Heritage Edition has about five cubic feet more space because of the lack of the third row. The rear tailgate drops down to make a nice bench for tailgating.

The 2020 Toyota Land Cruiser is costly, and it’s missing a few things that ought to be standard. Now available in two configurations, the 2020 Toyota Land Cruiser offers more choices for buyers than it has in years. Just don’t be prepared to sort through a list of options, though. Standard fare includes leather upholstery, heated and cooled front seats, heated rear seats, a power moonroof, a cooler in the center console, active safety tech, a 9.0-inch touchscreen for infotainment paired with Bluetooth, USB ports, navigation, JBL speakers, and a wireless charger.

You won’t find Apple CarPlay or Android Auto compatibility, which is a shame although Toyota’s basic infotainment software is reasonably intuitive. For $2,220, Toyota adds a rear-seat entertainment system, the Cruiser’s only option other than a few paint hues. Toyota asks about $86,600 for the standard Cruiser and charges $2,300 more for, well, less with the Heritage Edition that drops the third row, running boards, and center console fridge but adds a roof basket and special BBS wheels. The Heritage Edition isn’t necessarily a great value, but we can see its appeal.