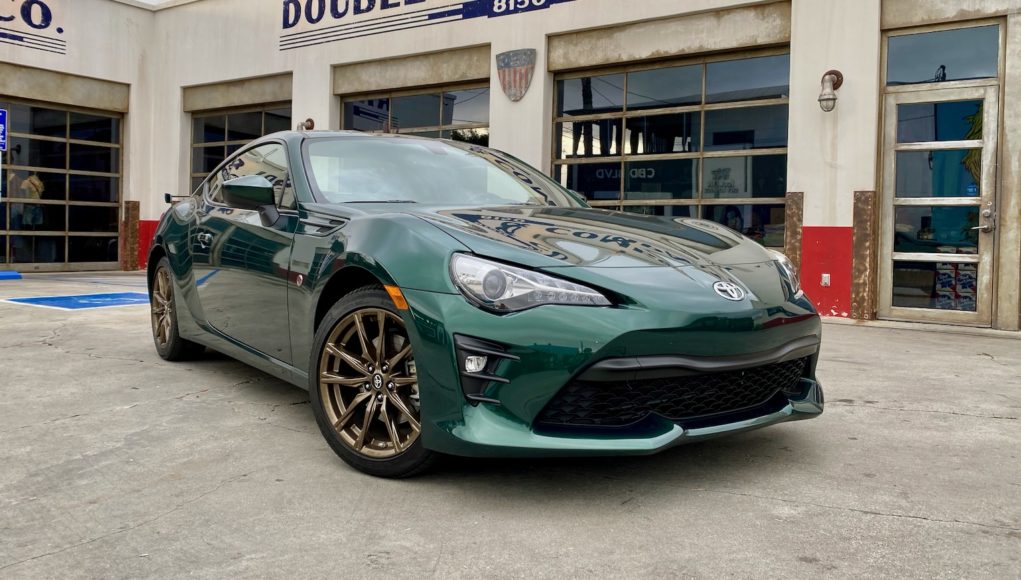 The 2020 Toyota 86 is a rear-wheel drive sports car that is not only attainable, but a joy to drive. Yes it needs more power. So if horsepower specs are your thing, then you’ll want to head over to your Chevy, Dodge or Ford dealer. While the Camaro and Mustang pack a lot more power than the 86, neither of them are as agile and light on their feet as the 86.

As a matter of fact, the 86 truly only has one real rival, the Mazda MX-5 Miata. Both the 86 and Miata have that classic Japanese sports car feel with their playful chassis and engaging driving experience. The 86 is still the more practical choice though, with its somewhat usable rear seat and larger trunk.

For the 2020 model year, the Toyota 86 didn’t receive any significant changes, other than the addition of the limited edition Hakone Edition trim level and an updated infotainment system with Apple CarPlay and Android Auto. That’s great news for fans that love the 86, but also bad news for fans that can’t wait for an all new 86.

The good news is that Toyota has already confirmed that it’s working with Subaru for the next-generation 86 (which might be called the GR 86) and BRZ, but that means for now we have to make due with the current 86, which we love, but at the same time it’s showing its age.

Under the hood the Toyota 86 is powered by a Subaru-sourced 2.0-liter four-cylinder boxer engine with 205 horsepower and 156 lb-ft of torque if you go for the six-speed manual transmission. If you go with the six-speed automatic, the specs drop to 200 hp and 151 lb-ft. On paper those specs don’t sound too impressive for a rear-wheel drive sports car, especially considering that it take about six seconds to reach 60 mph.

Well, just like the Miata, the 86 is much more than its engine. Yes the 2.0-liter engine could generate at least 50 more horsepower and not be as coarse, but the 86’s steering and suspension more than make up for the engine’s shortcomings. The 86’s quick-ratio steering and small steering wheel make you feel like you’re a kid again spending some time at the local arcade.

Unlike some other rivals, a small steering input is immediate and there’s pretty much no body roll. The 86 stays flat and hugs the road with glee. Flick it fast around a corner and tail wags like your beloved family dog. You’ll have a hard time ever being in a bad mood behind the wheel of the 86.

Inside the Toyota 86 may look a bit dated, especially when you look a the dials for the climate control or the rear camera that’s embedded in the rearview mirror. But get past those initial impressions and you’ll love how 86 has a near perfect seating position for both the driver and front passenger. Sadly the rear seat is best left for your groceries or a child. The lack of legroom and headroom makes it pretty much impossible to fit an average sized adult back there.

It’s a good thing that the rear seat folds flat, which makes it perfect for being able to carry longer items. The trunk is also able to hold a few carry-on bags with its 6.9 cubic feet of space.

If the latest driver assistance tech features are a must for you, you’ll be disappointed to hear that the 86 doesn’t offer adaptive cruise control, a blind spot monitor or lane departure warning. Plus the rear camera display in the mirror is pretty useless, since the display is so tiny and not nearly as clear as other systems that use a traditional screen.

The 86 began its life as the Scion FR-S and given the fact that it’s been four years since Scion was given the ax, it’s no surprise that the 86 is showing its age. But even if it is a bit rough around the corners (dated interior, lack of tech features, etc.), the Toyota 86 is hard to beat if you’re looking for an inexpensive and fun rear-wheel drive coupe.

2021 Toyota Sienna will be a hybrid minivan