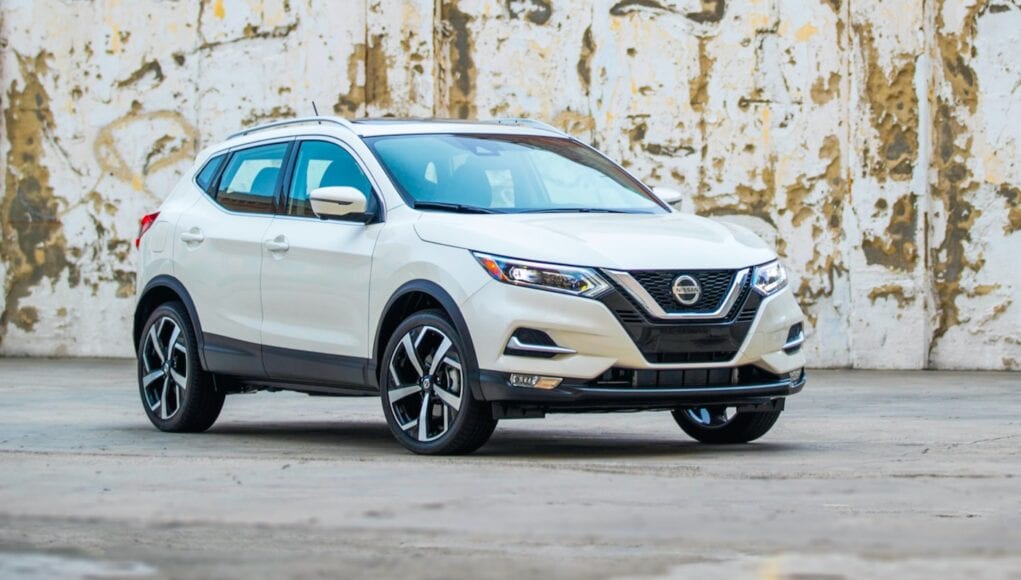 Nissan offers two flavors of the Rogue crossover, the standard Rogue, which competes with the Honda CR-V and the Toyota RAV4, and the smaller Rogue Sport, which rivals the Honda HR-V and Toyota C-HR. Nissan recently revamped the larger Rogue for the 2021 model year, but how does the older Rogue Sport compete with its rivals? For the 2020 model year the Rogue Sport has received a mild facelift that gives it a sportier face.

We do like the Rogue Sport’s new face, which is now more aggressive, to help it stand out in the crowded subcompact crossover segment. The more sculpted face not only grabs your attention more, but it also looks classier. Standard LED daytime running lights also top off the look. At the rear the biggest update are new taillights and at the top of the range, the SL trim level gets stylish new 19-inch alloy wheels.

Under the hood the Rogue Sport is only available with one engine, a naturally-aspirated 2.0-liter four-cylinder with 141 horsepower and 147 pound-feet of torque. The four-cylinder is mated to an Xtronic continuously variable transmission and all-wheel drive is optional. That horsepower rating is on par with its Honda and Toyota rivals, but we do wish that the Rogue Sport had a bit more “sport” under the hood. Around town it has adequate power, but accelerating on the highway takes patience.

Accelerating the Rogue Sport isn’t entirely fun, since it takes longer than expected to get up to higher speeds and the CVT doesn’t really help either.

Just like the engine, the Rogue Sport’s suspension and steering aren’t very sporty. The steering is too light and there’s too much understeer when you push the Rogue Sport hard. Again around town the average driver probably won’t notice these shortcomings, since it does feel a bit nimble when you’re running errands.

The Rogue Sport isn’t the most fuel efficient subcompact crossover, since it’s rated at 25 mpg city, 32 mpg highway and 28 mpg combined with front wheel drive. The HR-V beats it with its 28/34/30 mpg rating.

Inside the Rogue Sport’s interior feels comfortable. The dashboard has a simple layout without too many frills and the visibility from the high seats is great. At the front there’s plenty of headroom and legroom, but the legroom in the rear is not plentiful. The Rogue Sport has 33.4-inches of rear legroom, which pales in comparison to the HR-V’s 39.3-inches of rear legroom. Cargo space with the rear seat up comes in at 22.9 cubic feet, which expands to 61.1 cubic feet with the rear seats folded.

The Rogue Sport comes standard with a seven-inch touchscreen with Apple CarPlay and Android Auto. The infotainment system is pretty basic with graphics that feel a few years old.