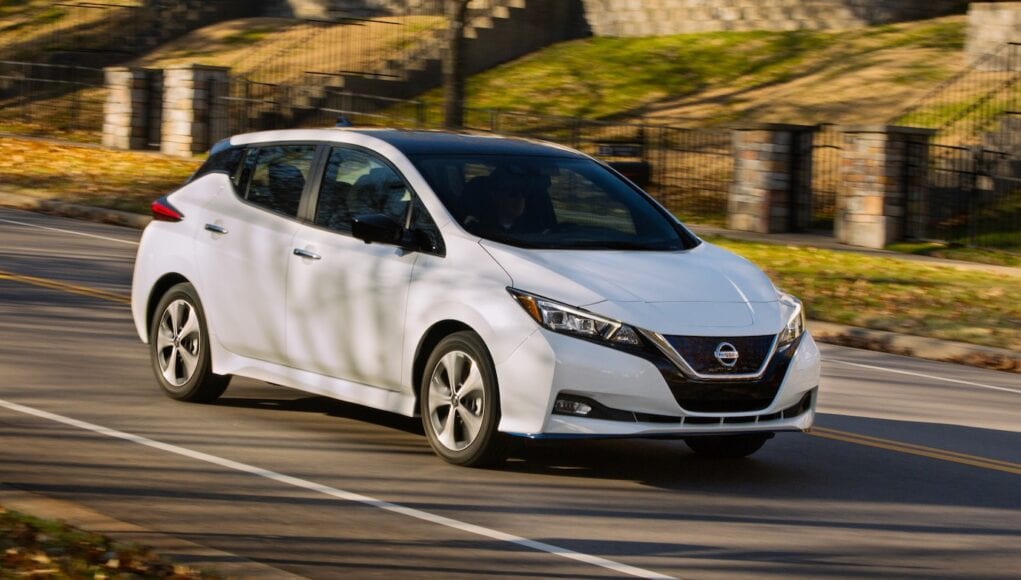 If you’ve been in the market for an electric vehicle, certain models like the Tesla Model 3 and Chevy Bolt probably come to mind. But before those EVs arrived, the Nissan Leaf took the EV segment mainstream when it debuted in 2010. When the Nissan Leaf arrived, it became the first EV for the masses with its easy to swallow price tag and decent driving range. Since then, the Leaf has received a lot more competition from new arrivals, like the Hyundai Kona Electric, the Model 3, Chevy Bolt and Kia Niro EV. Does the Leaf have what it takes to take on its rivals?

The standard 2020 Leaf is powered by a 110-kW electric motor that sends 147 horsepower to the front wheels, while the Leaf Plus has a more powerful 214-hp 160-kW electric motor. To compare, the Bolt has 200-hp.

When the first Leaf debuted, it looked nothing like anything else on the road, which helped it stand out. Since then, the styling of hybrid and electric vehicles have gone more mainstream, which means they no longer look weird. Just look at the Model 3, which looks more like a normal car, the second generation Leaf now looks a bit more mainstream.

Inside the Leaf’s interior is wrapped in black plastic, but the interior tries hard to not look cheap. The interior isn’t as cool and minimalistic like the Model 3 and unfortunately already looks a bit dated, especially the infotainment system. In front of the driver there’s a 7.0-inch digital display next to a large analog speedometer, while there’s a 8.0-inch infotainment display in the center of the dashboard. The infotainment system features Apple CarPlay and Android Auto compatibility, while a navigation system is optional. A seven-speaker Bose audio system is also optional.

The Leaf’s interior may not break any new ground in terms of its styling, but it is spacious and comfortable. The seats are comfy and there’s plenty of legroom in the back. There’s also lots of room for your stuff, since the Leaf has 23.6 cubic feet of cargo space with the rear seats up, which is more than you’ll get in the Chevy Bolt.

On the safety front, the Leaf comes standard with automatic emergency braking with pedestrian detection and a blind-spot monitor with rear cross-traffic alert. The ProPilot Assist semi-autonomous system is optional.

How does it drive? The Leaf is a competent EV, with modest acceleration times, but sporty it is not. If you want a sportier driving experience, you’ll want to check out the Model 3. The instantaneous torque makes the Leaf feel zippy around town, but it’s still slower than the Bolt EV and Model 3. The steering is also incredibly light, which makes it a bit boring to drive. We do like the Leaf’s e-Pedal feature that allows for one pedal driving, meaning that it dramatically slows the Leaf once you lift your foot of the accelerator.

How much does it cost? The standard Leaf is offered in two trim levels: S and SV, with the pricing starting at $32,525. The long range Leaf Plus is offered in three trim levels: S, SV and SL, with the pricing starting at $39,125. The Leaf Plus is more expensive than the Chevy Bolt, which starts at $37,890 and the Standard Range Model 3, which starts at $37,990. The one thing to note is that the Leaf is still eligible for the full $7,500 federal tax credit, while the Model 3 is not, which means that the Leaf will end up costing you less.

The second generation Nissan Leaf has mostly ditched the dorky looks from the first generation and thanks to the addition of the Leaf Plus, the Leaf has a driving range that is close to its rivals. The Leaf is now better than ever.