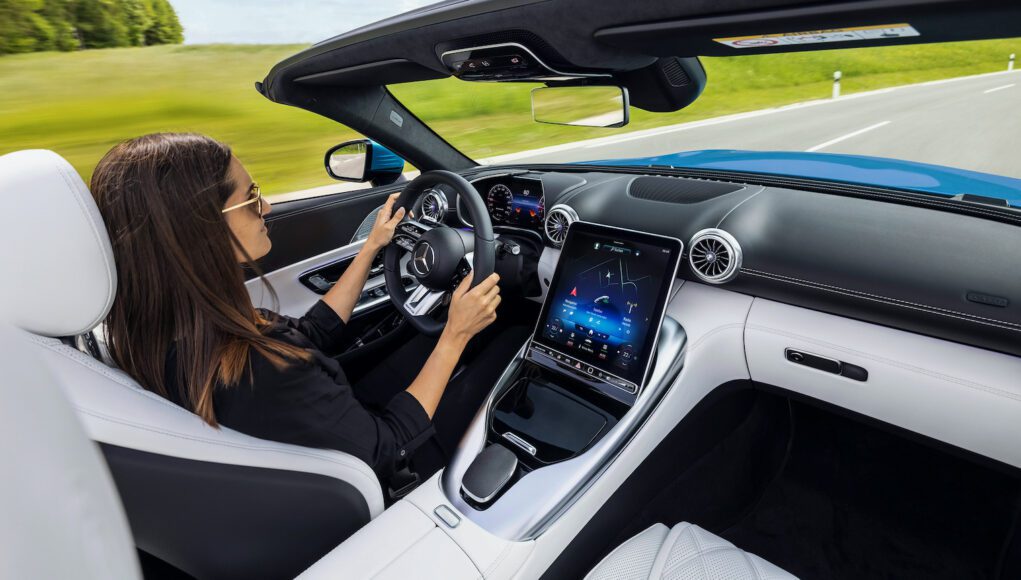 The 2022 Mercedes-AMG SL is almost here and to get us ready for the arrival of the new SL, Mercedes-Benz has released the first photos of its interior. The big news is that the new SL will have back seats, which is only the second time that it’s ever offered room for more than two.

The R129 generation debuted in 1989 with four seats, but here in the US we never got that version. Although the new SL is technically a 2+2, those rear seats are pretty small and probably will only fit children or your dog. The rear seat also provides an extra place to put your stuff.

Mercedes describes the interior as “hyperanalog” which basically refers to the fact that the designers created a mix of analog geometry and a digital world. For example the digital instrument cluster is integrated into a three- dimensional visor. Mercedes says that the interior was inspired by the original 300SL and that it “combines the highest levels of comfort and quality in its interior, coupled with just the right amount of sportiness.”

There’s also a 11.9-inch touchscreen with the latest MBUX infotainment system. The neat trick is that the angle of the screen is electronically adjustable so you can reduce glare when the top is down. The new SL will also lose the folding hardtop and instead us a powered cloth top.

Mercedes hasn’t released any specs for the new SL, but it should be offered with a range of AMG’s inline-six and twin-turbo V8 engines. There’s also the SL73 plug-in hybrid and all-wheel drive will be available for the first time.

Mercedes-Benz to go fully electric by 2030