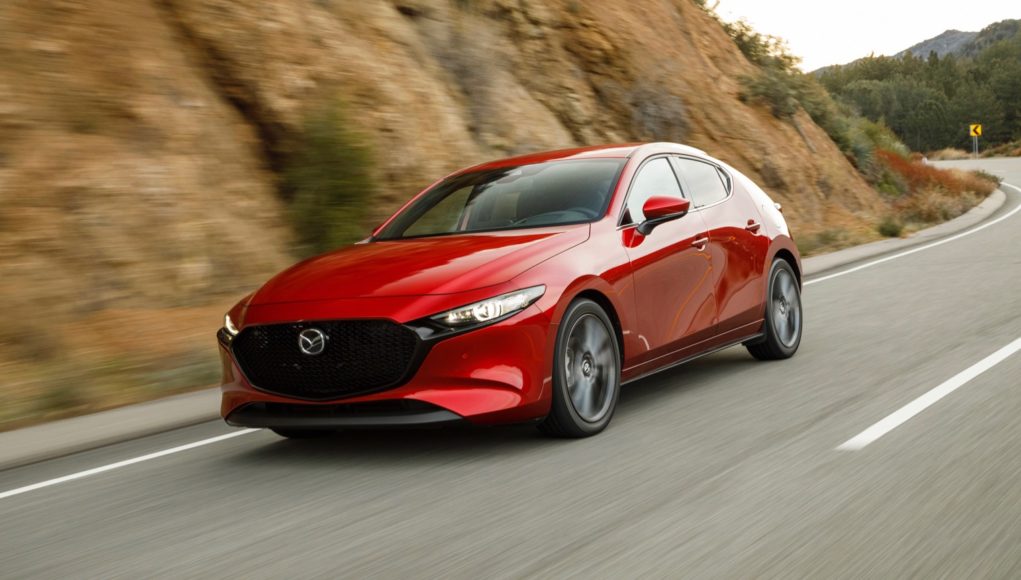 Back in 2003 Mazda introduced the Mazda3 as the replacement for the Protege – a compact sedan and hatchback that struggled to compete with heavyweights like the Civic and Corolla. Instead of just creating another model for the crowded compact segment, Mazda went a step above by positioning the Mazda3 as a more premium option. Fast forward to 2019 and Mazda continues to place the Mazda3 a step or two above its more popular rivals, but this time Mazda has injected an extra dose of style into the equation.

The 2019 Mazda3 is still offered in sedan and hatchback body styles, but both look like they cost thousands more than their predecessors. The sculpted exterior has a more upscale look than the techy looking Civic, which again will make people think that you’re driving something that costs thousands more. The sleek lines also give it a more luxurious feel than you’d expect in this price range.

Inside the premium feel continues with a clean, minimalistic design that feels uncluttered and easy on the eyes. You won’t find any aggressive shapes or a plethora of buttons here. Instead you’re greeted with a simple design that’s wrapped in high quality materials that make you feel like you’re in a car that costs thousands more. In front of the driver, there a 7-inch digital instrument cluster that contains basic information, but if you want something that looks more advanced, you’ll want to check out the VW Golf.

On top of the dashboard, there’s an 8.8-inch digital screen with a set of buttons for the climate control below it. The infotainment system is controlled by a dial controller, which might take a bit to get used to if you’re used to a touchscreen. The controller is easier to use than a touchpad and in this case, it’s also a better option than a touchscreen, since the digital screen is a bit too far to reach for.

Under the hood the 2019 Mazda3 is powered by a 2.5L four-cylinder engine that generates 186 horsepower and 186 lb-ft. of torque that’s mated to a six-speed manual or automatic transmission. For the first time, the Mazda3 is also available with all-wheel drive. The most efficient version is the Mazda3 sedan in the Premium trim level, which is rated at 27/ 36 mpg with front-wheel drive and 25/33 mpg with all-wheel drive. The 3 hatchback with the six-speed manual is rated at 25/35 mpg.

The 2.5L four-cylinder does pack a decent punch, although it’s not overly sporty, which is why Mazda needs to bring back the Mazdaspeed3. Around town the Mazda3 is light and fun, largely thanks to its 186 lb-ft pf torque that keeps things lively. If you want to dial things up a bit more, the Sport mode adjusts the throttle and does make the transmission shift a bit more aggressively. Sadly the six-speed manual is only available on the front-wheel drive hatchback in the Premium trim level.

We wish the six-speed manual and all-wheel drive system were available together, which would give Mazda a slower rival to the Subaru WRX.

Just like the rest of the Mazda lineup, it’s not only about what’s under the hood. Mazda excels at making its cars fun to drive and in the case of the Mazda3, its suspension is one of the reasons why. The big change is that the former multilink rear suspension has been replaced by a torsion-beam axle, but before you get disappointed, the simpler rear set up isn’t a bad thing. The suspension does a good job of limiting body roll and hugging the road. On some less perfect roads the suspension may be a bit too stiff, but in everyday driving around Los Angeles we didn’t complain too much.

With a price tag starting at $21,920 the 2019 Mazda3 represents a great value and if you factor in the fact that its styling and interior feel more like a luxury car than a run of the mill compact sedan or hatchback, you have a winner.