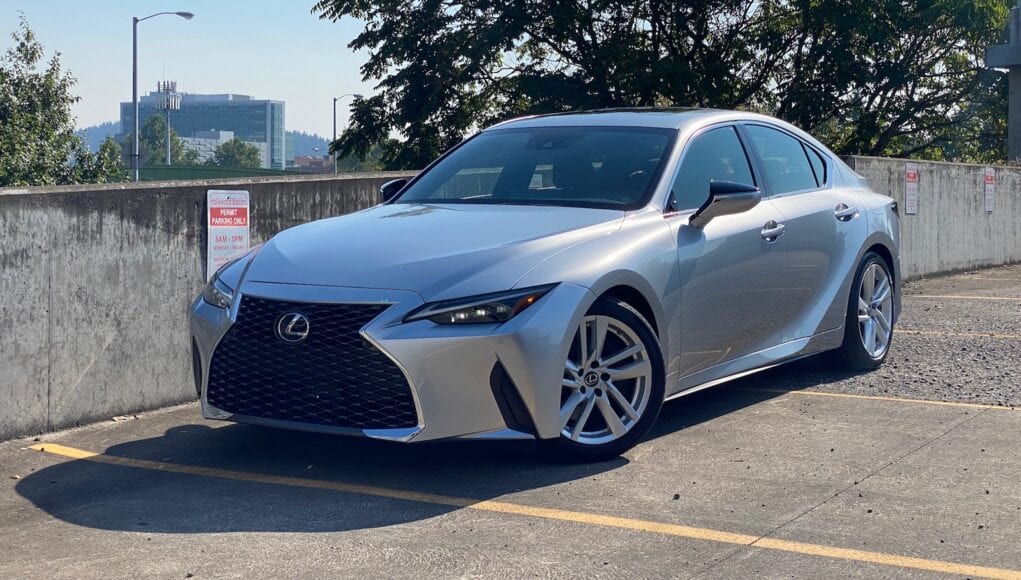 The Lexus IS has now been on sale for more than two decades. First introduced in 1999, this year marks its 21st year on the market. To mark the occasion, Lexus hit the compact sedan with a significant overhaul, including a more sculpted body, an updated interior, and a much-needed tech update in an attempt to keep the sporty four-door relevant in a market that craves crossovers and SUVs.

So, first things first: The 2021 Lexus IS is not actually all-new. In fact, Lexus still refers to it as a third-generation car internally, despite the redesign for 2021. Unveiled in June, the 2021 IS model range has been pared down to just two models, the IS 300 and IS 350 F Sport. The highlight of the standard equipment sheet is an 8-inch touchscreen that’s nearly 5.5 inches closer to the driver than the outgoing model’s. A 10.3-inch touchscreen is available as an upgrade, and perhaps most notably, the IS is finally available with Apple CarPlay and Android Auto integration suites.

Despite the common name and number, however, the IS 300 is in fact offered with two very different engines depending on how many wheels are driven. Power for the rear-wheel-drive IS 300 comes from a 2.0-liter turbocharged inline-four, which develops 241 horsepower and 258 pound-feet of torque. It’s bolted to an eight-speed automatic transmission. With the IS 300 AWD, all-wheel drive is paired with a 3.5-liter naturally aspirated V6 good for 260 hp and 236 lb-ft of torque, and a six-speed automatic transmission.

Thankfully, things are a bit more normal with the IS 350 F Sport. Its high-output V6 is alive and well, with its naturally aspirated displacement of 3.5 liters and an output of 311 horses and 280 pound-feet of twist. It’s the same engine regardless of drivetrain, though rear-wheel drive is still tied to the eight-speed automatic while all-wheel drive gets the six-speed. The quickest variant is the RWD model, which will crack off a run to 60 mph in 5.6 seconds. The AWD variant is intended to be an all-weather option, not a performance enhancer.

The observant reader will note that we keep referring to the IS 350 F Sport, rather than simply the IS 350. That’s because the F Sport package is no longer available on the IS 300 and is instead baked into every IS 350 built for the U.S. market. It includes a cold-air intake, a sportier exhaust, a sound generator for the cabin, 19-inch wheels, a sprinkling of F Sport badges, plus a body kit that adds bits like a rear spoiler and a diffuser integrated into the rear bumper. Heated and ventilated front seats are included, too. An available handling package adds an adaptive suspension for those who want access to an even sharper ride, but those who stick to the base F Sport will benefit from a static suspension tuned to be about as sporty as the outgoing model’s sharpest adaptive mode.

While the fundamental chassis may not have changed for 2021, the suspension was completely overhauled nonetheless. We tested a 2021 IS 300 RWD, and it’s impressive. The Turbo does an adequate job, and with the help of some electronic wizards, sounds quite good. Compared to the boosted fours offered in competitors such as the BMW M330i and Mercedes-Benz C300, the Lexus mill feels a bit flat. We didn’t get the opportunity to sample the downrated V6 in the AWD IS 300, and frankly we’re OK with that; we can’t imagine that it’s particularly inspiring.

And while many sport sedans are engineered to take advantage of their all-wheel-drive systems for performance gains, the implementation here only adds weight and complexity, not to mention a noticeable protrusion into the driver’s side footwell to make room in the center tunnel for the necessary drivetrain components. Sure, it’s cushioned, but it’s tight in there. And while the associated six-speed transmission still works perfectly well, it does look a bit dated on a spec sheet next to the eight-speed utilized on RWD models.

Fortunately, Lexus made significant strides where the IS needed them most: inside. The updated infotainment system is night-and-day better than what was offered previously. The inclusion of smartphone integration, both Android Auto and Apple CarPlay, is a massive upgrade in and of itself, and as in the 2020 RX, the addition of touchscreen functionality makes the Remote Touch interface much easier to live with. The available 10.3-inch screen is crisp and responsive, its closer location is a big help, and the clearly marked menus are easy to navigate via touch. We found the seats both comfortable and supportive, though they lack some of the adjustment options available on competitors, such as thigh extensions. With the F Sport package, they are both heated and ventilated, which is a nice touch. The faux leather upholstery is soft and supple too, much better than many competitors’ synthetic “hides.”

All told, the 2021 Lexus IS represents a healthy evolution of the compact sport sedan formula. It may not be a break-out star, but it’s a solid foundation upon which Lexus can potentially develop more enthusiast-friendly options. With new updated technology and Lexus reliability, the new IS will remain fresh for years to come!