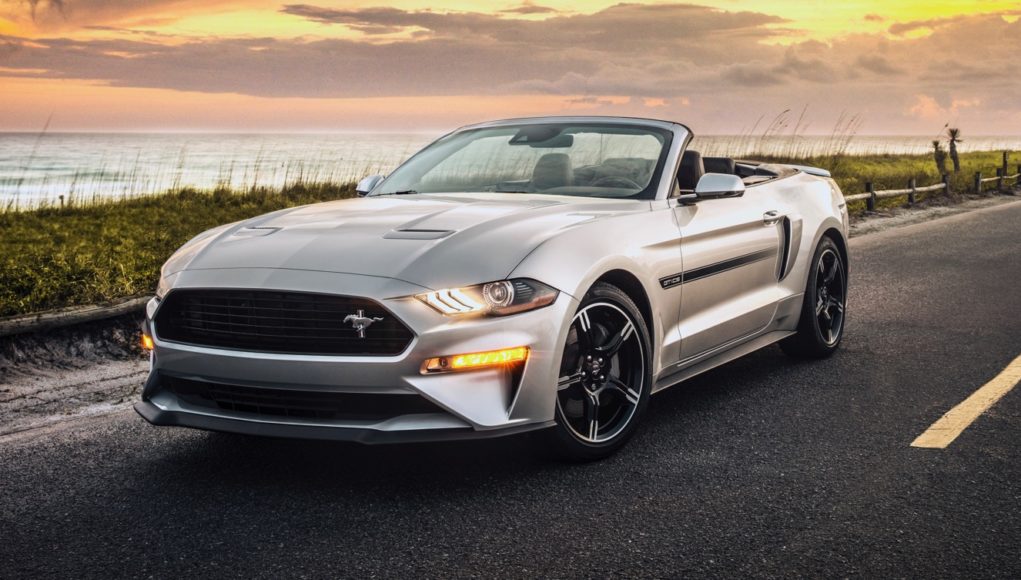 Over 50 years ago, the Ford Mustang launched the pony-car segment and over the years it continues to offer buyers a great combination of style and performance without a big price tag. Today the 2019 Mustang has morphed into a sophisticated and modern muscle car that’s equally at home on the drag strip or cruising down the coast with the top down.

Ford continues to offer several versions of the Mustang, which now includes the EcoBoost, EcoBoost Premium, GT, GT Premium and Bullitt trim levels, in addition to the Shelby GT350 and GT500 models. The EcoBoost models get their motivation from a turbocharged four-cylinder, while the GT and Bullitt models come to life thanks to a 5.0L V8. Ford decided to throw the old naturally-aspirated V6 out, so base Mustangs are powered by a 2.3L turbocharged EcoBoost four-cylinder that generates 310 horsepower and 350 lb-ft. of torque. Buyers can choose either a six-speed manual or 10-speed automatic transmission.

If you enjoy the sounds of a big throaty V8, then you’ll want to go with the GT or Bullitt models. The Mustang GT is powered by a 5.0L V8 with 460 horsepower and 420 lb-ft. of torque, while the Bullitt gets an extra 20 horsepower for a total of 480 horses under the hood. The V8 can also be mated to either a six-speed manual or 10-speed automatic.

We tested the Mustang GT with the six-speed manual and after a week we know for sure that the V8 is the choice you have to make. The sounds of the V8 are pure joy! While turbocharged engines have started to become the norm, there’s no replacement for the sound and feel you get from a large V8. That 460 horsepower is sent to the ground with ease and the soundtrack will convince even the most skeptical of your friends. Slam the pedal to the floor and the Mustang GT will reach 60 mph in the low 4 second range. The new rev-matching feature is also a welcome addition.

Ford has continued to improve the Mustang’s chassis as well and now it finally shines. The independent rear suspension improves its ride quality and helps it hug the road better than ever before. Zooming down the road, you’ll immediately notice how modern the Mustang feels now. There are also three different modes for the electric power steering (Normal, Comfort and Sport). The comfort mode lightens up the steering a bit, while the sport mode adds a nice amount of weight. There are also several driving modes to choose from that alter the driving experience: Snow/ Wet, Sport, Track and Drag Strip.

Inside the Mustang’s interior is inspired by the past with its dashboard that recalls the design of the first Mustangs. The overall layout is clean and simple, although the materials could be improved a bit. We noticed plenty of hard plastic throughout the interior. Once you get past the hard plastic bits, you’ll immediately notice the cool 12-inch digital instrument cluster that changes based on which driving mode you’re in. The Mustang also comes with the latest tech features, like SYNC 3, Apple CarPlay, Android Auto and even a Wi-Fi hotspot. The front seats also can be heated or cooled.

Ford announced last year that it’s killing off its entire car lineup in the US, with the exception of one – the Mustang and we can see why. Not only is the Mustang one of the most iconic cars on the market, it’s also one Ford’s best. The 5.0L V8 in the Mustang GT, combined with the improved chassis, makes it a modern day sports car that’s fun when you want, but also easy to live with everyday.