Bentley has taken the wraps off the EXP 9 F luxury Sport Utility Vehicle concept at the 2012 Geneva Motor Show. According to Bentley, the EXP 9 F is a glimpse of the future of Bentley. “The Company’s designers and engineers have created a compelling new take on the Grand Touring Bentley – a vehicle that feels equally at home at an opera gala performance, on the sand dunes and the overtaking lane of the autobahn.”

The EXP 9 F could become a third Bentley model-line alongside the Mulsanne and Continental GT, GTC and Flying Spur.

“We are very excited by the potential of a high performance, ultra-luxury Bentley SUV. We know that many Bentley customers already own SUVs, admiring their style, luxury, performance and versatility. With EXP 9 F, Bentley is making a clear statement of intent that we have both the expertise and desire to meet and exceed their expectations.” Wolfgang Dürheimer, Chairman and Chief Executive, Bentley Motors.

“EXP 9 F had to represent the absolute pinnacle of the sport utility sector, setting a new benchmark for this type of vehicle. The style had to reflect Bentley’s sporting character despite its radically different package and purpose together with sculptured, flowing surfaces in keeping with the Bentley tradition.”

The exterior of the EXP 9 F applies traditional Bentley styling cues like its matrix grille and round head lights to an SUV. The designers were inspired not only by the more functional nature of EXP 9 F but by the “visible engineering” of the famous Blower Bentleys. For example, the day-time running lamp apertures also act as the charge cooler air intakes for the twin-turbo W12 engine, each with a dramatic, mesh-covered turbine fan design and “rifled” inner surface finish.

“The challenge for the interior design team was to create a cabin which provides a blend of luxury and utility. The result is a light and airy environment with a commanding view of the road and a versatile layout which showcases Bentley’s craft and design language in an innovative and contemporary way.”

The EXP 9 F seating is 4+1, with a rear armrest lifting to reveal a cooled compartment for champagne and glasses. Seats feature a diamond-quilted ‘shoulder line’ in soft-touch leather, echoing the traditional appearance of a British field sport jacket.

The EXP 9 F is powered by a 6.0L twin-turbocharged W12 engine mated to an 8-speed transmission. According to Bentley, the Q12 6.0L engine could develop 600 horsepower and 590 lb-ft. of torque.

Now that Bentley has unveiled the EXP 9 F, the next step is for Bentley to receive initial feedback about the concept before it decides to put it into production.

“A Bentley Grand Tourer doesn’t necessarily have to be a coupé, a convertible or a saloon – it could equally well be an SUV. What’s important is that it should be true to Bentley’s brand values and in line with the desires and needs of our customers.”- Alasdair Stewart, Member of the Board, Sales and Marketing. 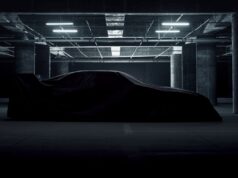