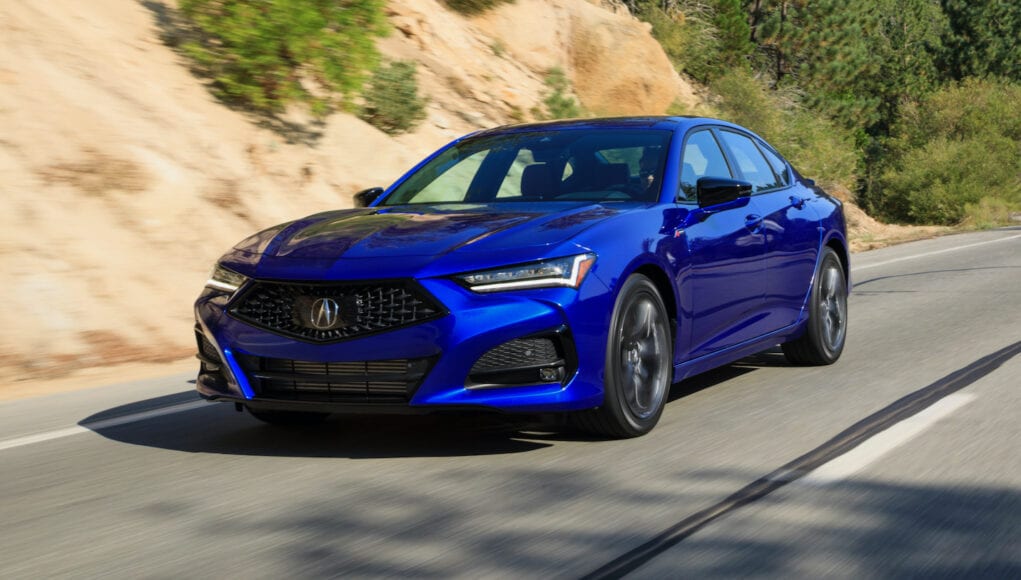 When Acura introduced the latest RDX two years ago we knew that the brand was on the right path to bringing some excitement back in its showrooms. Then last year Acura unveiled the stunning Type S Concept, which was a beautiful, sleek sedan that as we expected was a preview of the next-generation TLX.

Well the good news is that the Type S Concept was very close to the production version of the 2021 TLX. This time the TLX is ready to tackle the best from Germany with its rear-wheel drive proportions and its sleek exterior. Underneath the new TLX rides on a unique platform, which means that the TLX is more than just a fancy Honda Accord.

Compared to the last generation TLX, the new TLX has is 2.2-inches wider, with a wider track  (+1.2-inch front and +1.6-inch rear), a 3.7-inch longer wheelbase and its 0.5-inch shorter. To give it the ideal rear-drive proportions, the dash-to-axle dimension is 7.8-inches longer, which helps hide the fact that the TLX is still based on a front-wheel drive platform.

That extra length is more for style than function, since the TLX doesn’t have that much more interior room. Rear legroom only increases 0.4 inch and cargo space has only increased by 0.3 cubic-feet for a total 13.5 cubic feet.

The 2021 TLX is aimed at driving enthusiasts and to help it appeal to buyers that like to drive, Acura swapped out the previous MacPherson strut design for the front suspension with a double wishbone suspension. You might remember, Acura and Honda used double wishbones on its past iconic models, like the Integra, Civic Si and Prelude. The switch to the double wishbone suspension is meant to improve steering response, increase lateral stiffness and to maintain tire contact during at-the-limit cornering. At the rear there’s a multilink suspension. The Advance and Type S models also get adaptive dampers.

On our drive in the hills north of Los Angeles, the TLX suspension performed flawlessly by keeping the TLX planted to the road while cornering, but at the same time it’s not harsh. A new variable-gear-ratio electric steering system has improved the steering response. Acura says that at low to mid speeds the steering response is 22 percent quicker, while at high speeds it’s 15 percent quicker. There’s a noticeable improvement here with the TLX now feeling more agile than before.

The new engine picks up speed fast and has a nice growl, although some of those sounds are artificial.

If you want more power, you’ll want to wait for the TLX Type S with its twin-turbocharged 3.5-liter V6 that generates 355 hp and 354 lb-ft.

The good news is that although front-wheel drive is standard, Acura’s Super-Handling All-Wheel Drive system is optional. If you want the more spirited version, you’ll want to go with the torque-vectoring all-wheel drive system, which makes the TLX a joy to drive in the canyons. Turn the large Dynamic Mode knob to the right and you can select the Sport mode which dials the performance up a notch. The only thing negative, is the 10-speed automatic which can be a it slow to respond. There are paddle shifters, but the responses still aren’t super quick. Let’s hope that’s something Acura adjusts for the TLX Type S.

Either way, the TLX feels more lively than the Audi A4 and should be able to give the BMW 330i xDrive a run for its money.

Inside the interior is a major improvement over the outgoing TLX with its higher quality materials, aggressive design and better tech features. The infotainment system has been upgraded to a 10.2-inch screen, which is the same one that you get in the RDX. The system is operated via a touchpad controller, which is better than the system that Lexus uses. Acura has also thrown in new ambient lights and there’s an optional 17-speaker ELS Studio audio system, which sounds great.

The TLX sits in an interesting spot in the luxury sedan segment, since it’s priced closer to several compact German sedans, like the A4, 330i and C300, but its sized closer to the midsize sedans, like the BMW 5 Series and Mercedes-Benz E-Class. The 2021 TLX starts at $38,525, including the $1,025 destination. What does that mean for luxury sedan buyers? The TLX is a great value, since you get the size and space of a midsize luxury sedan, at the price of a compact.