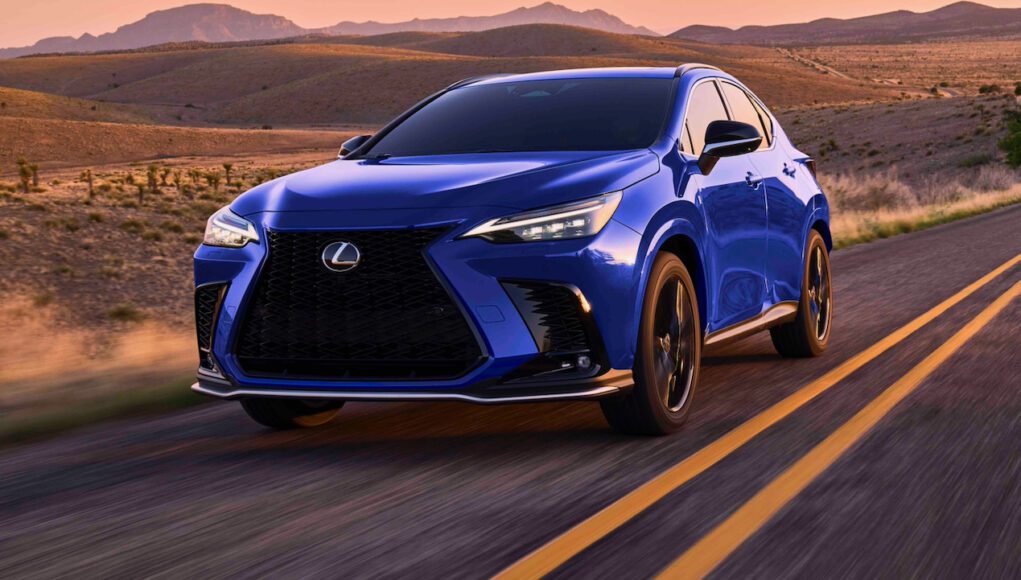 Lexus has unveiled the second-generation 2022 Lexus NX crossover. The new NX is based on Toyota’s TNGA platform with various powertrain options, including a plug-in hybrid.

On the outside the new NX isn’t a dramatic departure from its predecessor. The overall look, looks a bit more modern with a new version of Lexus’ spindle grille, sleeker headlights and a horizontal light bar at the rear. Compared to its predecessor, the new NX looks more sculpted and muscular. The bulging fenders also give it a more athletic look than before. Lastly at the rear the tailgate loses the round Lexus emblem and instead has “LEXUS” spread across it.

While the exterior changes are mainly evolutionary, inside there are much bigger changes. The crappy touchpad for the infotainment system is gone and now we have a 9.8-inch or 14-inch touchscreen. The interface for the system also looks way better too, with the navigation map finally getting a more modern look. Wireless Apple CarPlay and Android Auto are standard. A 7-inch digital gauge cluster is standard and a 10-inch head-up display is optional.

Lexus hasn’t released the dimensions for the interior, but it says that there is more headroom, legroom and cargo space. One cool new feature are the mechanical door handles, called Digital Latch, which replace the traditional door handles. The doors are electronically controlled.

For the greener choices, there are two hybrid models, which are both powered by the 2.5-liter engine. The NX 350h has two electric motors, with one that drives the rear wheels, with a total of 239 hp. The one we’re most interested in is the NX 450h+ which is powered by the same plug-in hybrid powertrain as the Toyota RAV4 Prime. This is also the first Lexus plug-in hybrid. The NX 450h+ has 302 hp and an electric range of 36 miles.