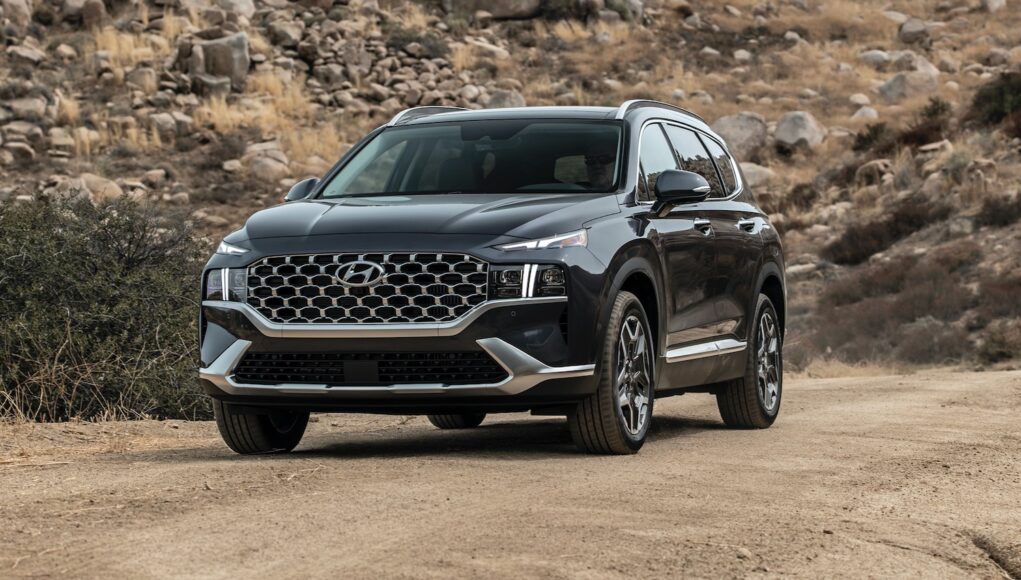 The smartly conceived 2022 Hyundai Santa Fe makes the most sense in hybrid spec, but Calligraphy crossovers lure us with luxury trappings. The Santa Fe spans the mid-size crossover SUV range with seating for five, a fuel-sipping Hybrid model, and turbo-4 Calligraphy luxury edition. Its competition ranges from the similar Kia Sorento to the Honda Passport, Nissan Murano, and Jeep Grand Cherokee. For 2022, a plug-in hybrid is now available, and a new XRT trim joins the lineup of SE, SEL, Limited, and Calligraphy crossovers.

The Santa Fe has a standard-issue SUV body, and takes it overboard with cut lines and stamped-in curves. The split grille and its textured panels get bracketed by split headlights pinned to the front end in letter-T shapes; it’s all trimmed by metallic bands that run across the lower front end. There’s plenty going on here, and it hardly quiets down thanks to the cutlines that circle the wheel wells and the heavy side sculpting. The new XRT edition tones down some of the clutter with its dark trim and wheels.

We’ve yet to drive a base model but having sampled its 191-hp 2.5-liter inline-4 and 8-speed automatic in other models, we expect a 0-60 mph time in the mid-eight-second range so this should be budget choice. Less common but more urgent is Hyundai’s 277-hp 2.5-liter turbo-4. With 311 lb-ft of torque and a dual-clutch 8-speed automatic, it’s swifter to respond to stabs of gas than the base engine, but the shift quality’s less sure. Less smooth in some low-speed gear changes, it’s still eager to move, particularly in Sport mode, where it drops the indecisive shift logic for quick, clean changes.

At about 4,000 lb the Santa Fe needs the turbo-4 to overcome the power struggle, and it’s practically required to tow up to its max rating of 3,500 lb. Off-roading isn’t entirely its thing, but its 8.2 inches of ground clearance, all-weather traction, and ability to roll over bumps buried in snow will be welcome by many drivers.

With its front strut and rear multi-link suspension, teamed with electric power steering, the Santa Fe has unremarkable but predictable handling. Its poise stands out, even on 19-inch wheels on some versions; it handles deep ruts and pavement seams with aplomb, with a little suspension noise in the mix. It’s best at damping long, low ripples on the highway, and it responds to sharp steering changes without losing its cool.

Choose the Santa Fe Hybrid, and Hyundai slips in two electric motors, a 1.49-kwh battery pack, and a 1.6-liter turbo-4 all linked to a 6-speed automatic and standard all-wheel drive. It’s admittedly less energetic than the turbo-4—but we’d pick this version over the base model, thanks to similar power output (a net 226 hp, offset by a few hundred pounds more in batteries) and equally smooth power delivery. The Santa Fe Hybrid’s speed trade-off seems worth it, considering the high 34-mpg combined rating on Blue models. It’s quick enough off the line, has light but effective steering, and the ride’s unruffled by the extra weight.

Its admirable blend of economy only gets better in the Plug-In Hybrid: that version silently rolls out from a stop on battery power alone, offering the driver a choice of electric-only driving for up to 31 miles. Drivers can also choose a hybrid mode that blends battery and engine power all the time. Hyundai also fits the PHEV Santa Fe with drive modes and standard all-wheel drive, which cut into potential fuel economy but relieve the plug-in model of some of its energy-saving zeal. Mostly, what drivers will notice aside from more prominent tire and suspension noise, is more heaving in its ride, due to the way the suspension manages the PHEV’s chunkier curb weight.

Crash-test scores push the Santa Fe into the top SUV echelon being exceptionally safe. The IIHS awards the Santa Fe its Top Safety Pick+ trophy, even in base trim. Its headlights are “Acceptable,” except when they’re upgraded to “Good” LED units. The Santa Fe’s nearly flawless in NHTSA tests, with five-star ratings across the board, save for a four-star rollover resistance rating. All Santa Fe SUVs get standard automatic emergency braking, blind-spot monitors, active lane control, automatic high beams, and adaptive cruise control. Options include blind-spot steering assist, parking sensors, a surround-view camera system, and blind-spot cameras that display their visual data in the gauge cluster.

Inside the Santa Fe calms down with a tiered dash capped by an 8.0- or 10.3-inch touchscreen. An electronic gear shifter studs the center console, and various switches and buttons group inside a control pad and pod-shaped vents. With the pricey additions of a 12.3-inch digital cluster, ambient lighting, nappa leather, and soft-touch trim, the Santa Fe borders on Genesis levels of refinement; if Hyundai were Toyota, the Santa Fe Calligraphy would be a Lexus. We’re impressed by the fit and finish in Limited and Calligraphy Santa Fes. The turbo-4 engine has a noticeable groan, but the thicker glass and finely woven materials that line the cabin blot out some road noise. Lower-end versions have more black plastic and durable-looking fabric, and more tire noise.

The Santa Fe wraps its running gear around a five-seat interior with ample cargo space. Riding on a 108.9-inch wheelbase, the 188.4-inch-long Santa Fe has the kind of space that lures drivers from sedans to SUVs. In front, the seats in higher-spec models have all the right cushions in all the right places, with power adjustment on the SEL trim level and above. Base seats have cloth covering, but heating and cooling come with pricey versions, as does power adjustment for the front passenger.

The Santa Fe incorporates lots of small-item storage between and around the front passengers ahead of the shifter there’s a covered bin, and a key-sized spot next to deep cupholders. We’d be fine with three people in the second row, so long as the middle passenger came in a size medium. Head and leg room abounds for 6-footers even with the available glass roof. Though it lacks the Kia Sorento’s sliding second-row seat, the Santa Fe does have 41.7 inches of leg room for its back-seat passengers. It has 36.4 cubic feet of cargo space, or 72.1 cubic feet when the back seats are folded down; there’s also a shallow storage tray under the cargo floor.

Take the $30,225 Santa Fe SEL, with or without all-wheel drive. It has an 8-way power driver seat, remote start, wireless smartphone charging, heated front seats, and satellite radio. A package of features includes a power tailgate, leather upholstery, a 12.3-inch digital display, 12-speaker Harman Kardon audio, a power front passenger seat, a 10.3-inch touchscreen with navigation, and a panoramic sunroof. It’s a great value at about $36,000. We’d skip the $33,525 Santa Fe XRT unless you like its dark exterior trim.

Hyundai charges $34,935 for the Hybrid Blue; it also comes in SEL Premium and Limited trim. The Santa Fe Plug-In Hybrid costs at least $41,245 and only can be purchased in California and states that have adopted its plug-in vehicle rules: they include Colorado, Connecticut, Maine, Maryland, Massachusetts, New Jersey, New York, Oregon, Rhode Island, and Vermont.

While Hyundai’s Santa Fe has been around for quite some time, it often got lost in the middle of the midsize SUV pack, not any more. The 2022 Hyundai Santa Fe brings remarkable value, competitive efficient powertrains, and class-leading technology. The Santa Fe easily vaults towards the top of its class punching way above its price point giving it the credentials to not get lost in the pack because it’s definitely worth a look. 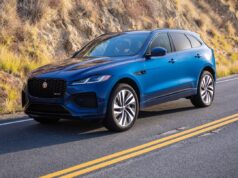