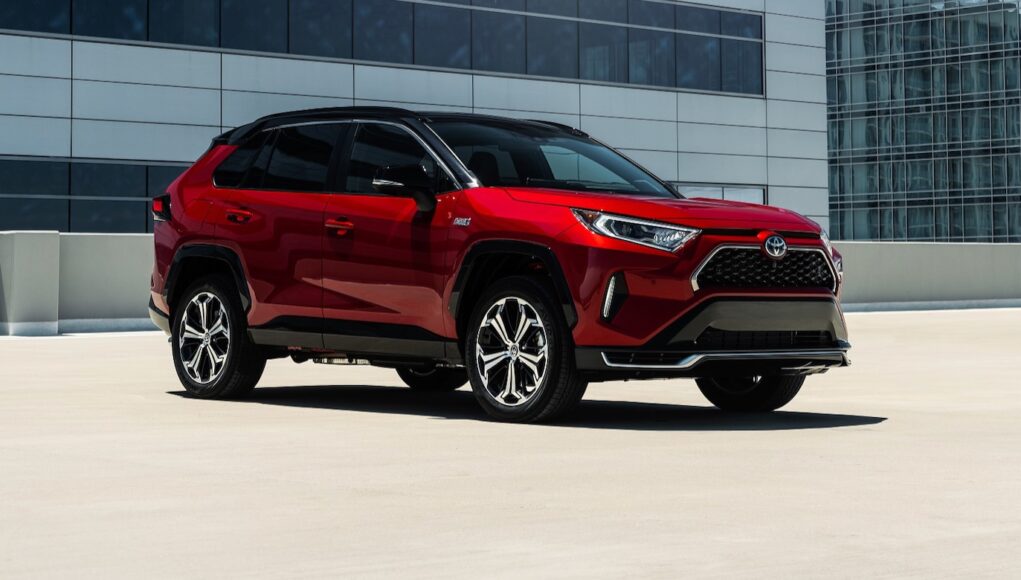 The 2021 Toyota RAV4 is the meat-and-potatoes crossover for many buyers; the RAV4 Prime supplies the all-electric range. The RAV4 compact crossover SUV still has a few tricks up its sleeve. It adds a plug-in hybrid this year, with a twist: the 2021 RAV4 Prime has the quickest acceleration of the lineup.

The good news: All RAV4s get the same mini-’ute good looks that started in 2019. The RAV4 draws closer to the Tacoma and 4Runner in all the right ways. It’s a mini off-roader in some looks, even if it lacks the hardware to match. The roofline and chunky body sides are a boon to curb appeal, even if they make the RAV4 slightly more uncomfortable inside this time around, with less head room for tall passengers.

All RAV4s start with an inline-4 under the hood, although what happens down the driveline depends on how deep your pockets are. The RAV4 Prime adds bigger electric motors, a bigger hybrid battery pack, and bumps up overall output to 302 hp. Unlike other plug-in hybrid crossovers, the RAV4 Prime’s song is performance: it’s the quickest RAV4 to 60 mph at an estimated 5.7 seconds (two seconds faster than the RAV4 Hybrid) and can travel 42 miles on electrons alone.

The RAV4’s stiff frame and four-wheel independent suspension (MacPherson struts in front with multi-link, trailing wishbones in the rear) give the RAV4 a supple ride over rough bumps with the weight of the RAV4 Prime’s batteries helping ride quality. The Prime also benefits from added sound deadening making it the quietest RAV4 of the bunch.

The RAV4 earned top “Good” scores by the IIHS in its rigorous crash-test battery, and the agency rated its automatic emergency braking system as “Superior” at avoiding forward crashes. But only the most expensive Hybrid and Prime models have headlights that merit a Good rating; it’s a Top Safety Pick by the IIHS rules. Federal testers were mostly complimentary and gave the RAV4 a five-star overall score, including four stars for front and rollover crash safety.

The front seats are snug for taller drivers and riders, especially with the optional sunroof that cuts into available head room. The rear seats offer scant more head room, but not more leg room. There are 37 inches of leg stretch-out space in the back, which is good, but also not as much as some rivals. Three across in back is possible, just not preferable. With the rear seats up, the RAV4 holds more than 37 cubic feet of cargo, which expands to 69 cubic feet. Primes have 33.5 cubic feet behind the second row and 63.2 cubic feet behind the front seats, with some space lost to battery packaging.

The 302-hp RAV4 Prime is the wild child. It steers toward sporty with its exterior accents, sport suspension, available 9.0-inch touchscreen, synthetic leather upholstery with red accents, subwoofer, and moonroof. Every 2021 RAV4 gets active safety features that include automatic emergency braking, active lane control, and adaptive cruise control. Prices start at $39,275, though and can creep up to just under $50,000.

With the RAV4 Prime, Toyota has stuck the veritable sweet-spot of the small SUV class. The 2021 Toyota RAV4 Prime is a great competitor in the compact crossover class. It does everything you’d want with Toyota refinement and reliability, and in Prime versions, all on electricity. Regardless of trim line, the 2021 Toyota RAV4 Prime is an impressive crossover, one that Toyota continually keeps improving to make it the best.