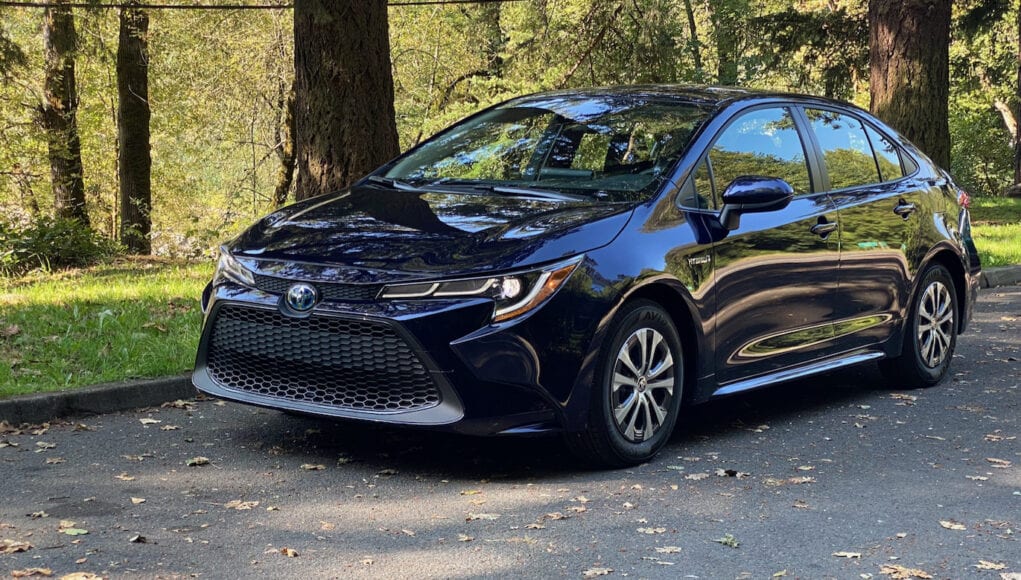 The 2021 Toyota Corolla buffs the automaker’s small-car credentials in some obvious ways, and some subtler ones, too. An absurdly good value especially in hybrid trim, the 2021 Corolla’s a resale beacon and hasn’t lost those attributes even as it’s grown more stylish and more nimble. For 2021, all versions gain Android Auto compatibility, two more airbags, and available satellite radio. Blind-spot monitors are more widely available, too. With the latest Corolla, Toyota applies some of its current styling cues, but not the more extravagant ones. The Corolla hatchback’s the more striking of the duo; sedans have interesting detailing but a traditional outline.

Hybrids and base Corollas putter, while “S” models keep a more brisk pace. The Corolla Hybrid’s 121-horsepower output may shy from acceleration, but delivers 52-mpg combined EPA fuel economy, which shames the otherwise excellent gas mileage that comes from the Corolla’s 1.8-liter inline-4 and continuously variable automatic transmission (CVT). Either of those satisfy the Corolla’s mission as innocuous but capable transformation; SE and XSE cars with the 169-hp 2.0-liter inline-4 rush their way to quicker acceleration and come with manual shifters if you like. All Corollas handle with aplomb; the steering’s never too heavy, the ride quality never too bobbly.

In either Corolla, the front passengers have the room they need to prosper, but sedans have superior rear seats, from the cushions themselves to the head and leg room that surrounds them. Hybrids have some of the best chairs of all, though all Corollas get taxed by a five-passenger road trip. Cargo space is shy on sedans, but hatchbacks have plenty of storage behind the back seats and behind the fronts when the backs fold down. Every Corolla gets automatic emergency braking, adaptive cruise control,  active lane control, and blind-spot monitors are standard or available on almost every model. Corollas also get touchscreen infotainment with Apple CarPlay and Android Auto compatibility, power features, and cloth or synthetic leather upholstery.

The 2021 Corolla ratchets up its enthusiasm for driving, but keeps it low-key. Toyota has injected more flair into the latest Corolla’s power and its ride and handling. Hatchbacks have the most interest in driving, thanks to a 2.0-liter inline-4 with 169 hp coupled to either a 6-speed manual or a CVT. The inline-4 feels willing enough, though the revs bring plenty of noise. It’s a slick performer with the 6-speed manual, which rev-matches for smoother shifts. Expect a 0-60 mph time of about 7.5 seconds. Sedan Corollas are fitted with the 139-hp 1.8-liter inline-4. It’s slower, but it’s also quieter and calmer in the more sedate. It also handles the road with a more relaxed attitude. Its steering tracks true, but with even lighter effort.

Take all that into consideration, add otherworldly fuel-economy numbers, and you have the Corolla LE Hybrid, the poster-child of our review. It’s essentially a penalty-free Prius for those who don’t care for that car’s strange styling. The Corolla shares the Prius’ hybrid 1.8-liter inline-4 and checks in at 121 hp, which means strong acceleration is not its forte. In other important ways, it’s less compromised. Its 15-inch wheels and tires generate a softly damped ride; at 52 mpg combined, it’s a stellar fuel-economy performer. EV-only driving range is minimal and its steering is even less communicative, but who cares? It’s the ultra commuter car, and costs less than $25,000.

Inside, the 2021 Corolla leaves the big swoop of console trim to other Toyotas. Instead it adopts a simpler, open, and airy feel that omits cutlines and seams where it can. It leaves clutter behind in favor of a low console and a few well-defined surfaces. Some Corolla dash panels get stitched swatches of leather-like upholstery, and all get a touchscreen that stands atop the dash billboard-style, where it’s easy to see and use. Whether hatchback or sedan, the Corolla offers shapely front seats and good passenger space.

The $20,780 Corolla L sedan gets power features, LED headlights, a 7.0-inch touchscreen and Apple CarPlay/Android Auto compatibility. An LE gains bigger wheels and tires and an 8.0-inch touchscreen. Our choice would be the $25,180 Corolla XLE, which adds a sunroof, a power driver seat, and synthetic leather upholstery, with options for navigation and wireless smartphone charging, but we’d seriously consider the $24,355 Corolla LE Hybrid, which gets all the LE gear except for its smaller 15-inch wheels. At the top of the range, the $26,680 Corolla XSE has navigation and synthetic leather upholstery, with options for ambient lighting and premium audio. It’s still a bargain.

Toyota’s Corolla is a hallmark of automotive transportation; it has the rare distinction as the only vehicle to have sold more than Volkswagen’s Beetle. So Toyota knows something about building basic comfortable reliable cars. The 2021 Toyota Corolla shows just exactly what Toyota has learned over the decades. The Corolla offers non-offensive current styling, almost every technology available, stellar safety and comfort; and in hybrid form, amazing fuel economy. With the 2021 Corolla, buyers can’t make a wrong decision.