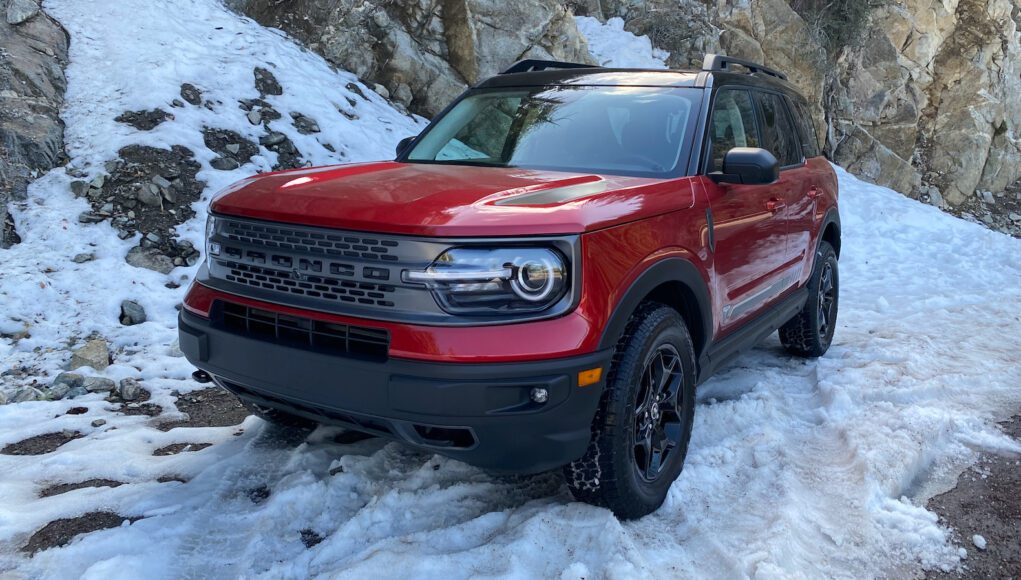 The full-size Bronco is almost here, but in the meantime Ford has already introduced its smaller sibling, the 2021 Bronco Sport. If you’re wondering if the Bronco Sport is worthy of its iconic badge, the answer is yes. The Bronco Sport may share its platform with the more car-like Escape, but it has the necessary chops that it needs for a fun adventure on the trails.

Speaking of the Escape, most buyers probably won’t even realize that the Bronco Sport and the Escape are very closely matched under the skin. On the outside the Bronco Sport looks the part of a more rugged SUV with its boxier styling and it even borrows some styling cues from the larger Bronco. We especially like the big “BRONCO” letters that are splashed across the grille.

Under the hood there are two engine choices, although most trim levels are powered by a 1.5-liter turbocharged three-cylinder. The small engine generates 181 horsepower and 191 pound-feet, but if you want more power there’s a turbocharged 2.0-liter four-cylinder with 250 hp 270 lb-ft. of torque. Both engines are mated to an eight-speed automatic transmission and all-wheel drive.

For our testing, Ford supplied the Bronco Sport First Edition, which is powered by the larger engine. With this engine the Bronco Sport packs a pretty decent punch. We were surprised at the acceleration and the engine is smooth and responsive. The eight-speed automatic also excels here by managing to always be in the right gear and it’s eager to switch gears when needed. The transmission is a highlight, but its rotary gear selector could be better. The knob lacks resistance between the different selections, which makes it easy to end up in drive, when you wanted reverse.

The suspension is a bit softer than you might expect with more body roll than you get with the Escape. The Bronco Sport is not as sporty as say a Mazda CX-30 Turbo for when you want to wind up a back road, but unlike most traditional crossovers, the Bronco Sport loves playing in the dirt.

The Bronco Sport is more than just a small commuter SUV, since when the road ends it’s ready for an adventure. The Bronco Sport easily tackles the trails, muddy ruts and sand. We never felt like we were going to get stuck out in the middle of nowhere. So the good news is that the Bronco Sport can double as an everyday SUV, but then when you want to have a weekend in the wilderness, it’s ready to go.

Inside the interior is spacious and its packed with features, like an 8-inch touchscreen, a digital screen in between the two analog gauges and a B&O audio system. If you opt for the Badlands or First Edition models you also get seats that are easy to clean and rubberized flooring. Thanks to the upright seating position and high roofline, the Bronco Sport feels comfortable, but legroom in the rear is a bit short.

Our biggest gripe with the interior is that some of the materials look a bit low rate. The interior has way too much hard plastic, which is something you wouldn’t expect when you’re paying close to $30,000 for the Bronco Sport.

At the end of the day we were mostly impressed with the Bronco Sport, which is a stand out in the crowded compact crossover segment. Thanks to its rugged styling, it looks the part and when the pavement ends it is ready to perform.