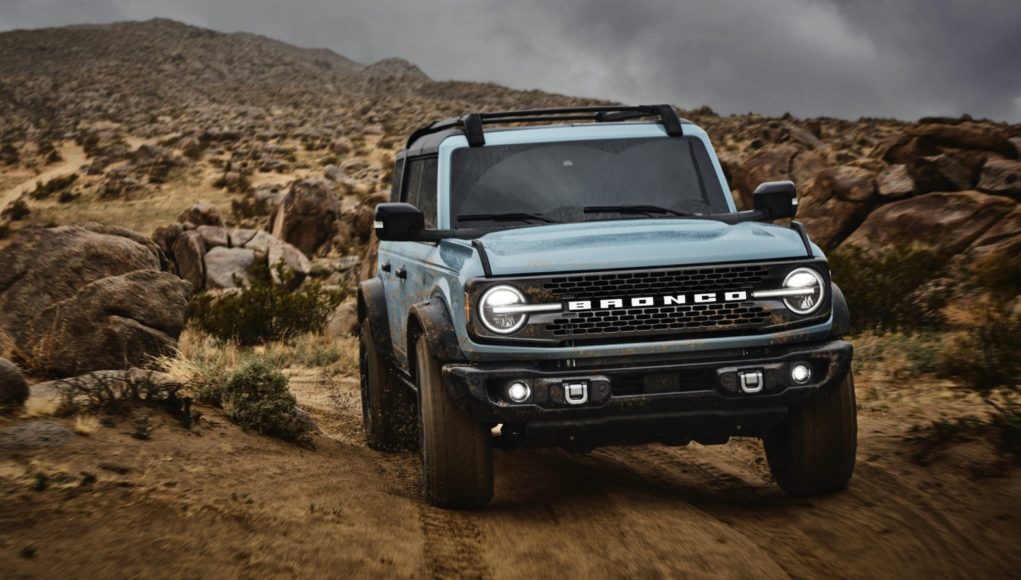 After waiting for years, the 2021 Ford Bronco and Bronco Sport are officially here. The new Bronco family now includes the two-door, the first ever four-door and the smaller Bronco Sport.

The 2021 Bronco two- and four-door models ride on a body-on-frame design that is based on the next-generation T6 platform, which is the evolution of the platform that underpins the current Ford Ranger. The Bronco is a serious off-roader with Dana axles at the front and rear, a MacPherson strut front suspension and a solid rear axle with coil spring and five locating links. For buyers that take off-roading seriously, there’s a suspension upgrade that adds Bilstein dampers with end-stop control valves.

The Bronco comes standard with four-wheel drive, which can be set to part-time or full-time with a 2-speed transfer case. There are also Spicer Performa-TraK front and rear locking differentials, 35-inch tires with beadlock-capable wheels, skid plates, a disconnecting sway bar and several terrain modes.

To compete with the Wrangler, the new Bronco also comes with a removable top and removable doors that can be stowed in the back. The two-door model comes standard with a hard top with three sections, two at the front and one at the rear. Four-door models have four-section tops and the quarter windows are removable on both versions. A cloth soft top is also available on the four-door Bronco.

Ford says that the new Bronco has best-inc-class ground clearance of up to 11.6 inches, a crawl ratio of 94.75:1, breakover departure angles of 29 and 37.2 degrees, respectively and water fording capability of up to 33.5 inches.

There will be two engine options in the Bronco. The base engine is a 2.3-liter turbo four-cylinder with an estimated 270 horsepower and 310 pound-feet of torque. For buyers that want more power there’s an available 2.7-liter turbocharged V6 with 310 hp and 400 lb-ft. A 7-speed manual transmission or a 10-speed automatic transmission are available.

The Bronco comes standard with a terrain management system called G.O.A.T. which stands for Goes Over Any Terrain. It has several modes: Normal, Eco, Sport, Slippery, Mud, Sand, Baja, and Rock Crawl.

The 2021 Ford Bronco is slated to arrive next spring with a price tag starting at $29,995, including the destination fees. It will come in several trim levels: base, Big Bend, Black Diamond, Outer Banks, Wildtrak, and Badlands.

A Sasquatch package adds more off-road capability with full-time 4WD, locking front and rear axles, a high-clearance suspension, 17-inch beadlock-capable wheels, and an upgraded suspension with the Bilstein dampers. A Bronco Launch Edition is also available that’s based on the Badlands, but adds 35-inch tires. Only 3,500 Launch Edition models are planned.

Inside there’s either a 8.0- or 12.0-inch touchscreen, an optional surround-view camera system with off-road spotter views, silicone rubber switches, and wipeable surfaces. Washable rubber floors and six upfitter switches are also there.

If you want one, you can place your $100 deposit now at Ford.com.